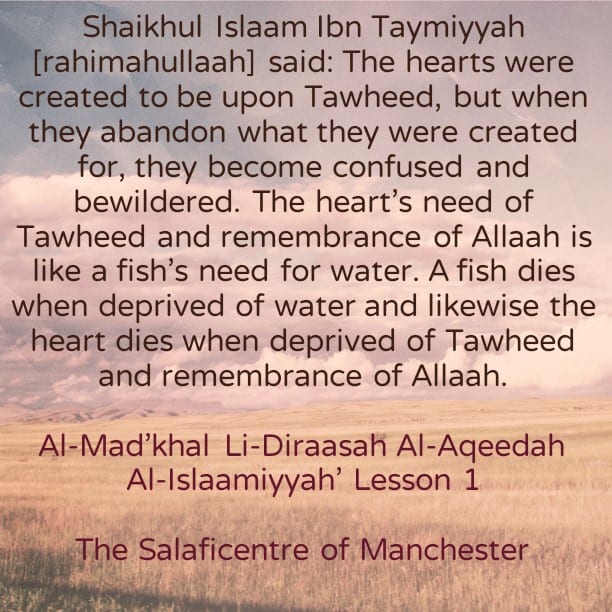 The sound Islamic Creed is based on the Qur’aan and the Sunnah as opposed to the other creeds. The sources of the other creeds differ and you’ll [also] find them being in opposition to each other- filled with contradictions and diverse orientations.  As for the person who has been blessed with the sound Islamic creed, he is saved from all of this.

The sound Islamic creed is the creed that is in agreement with Fitrah [natural disposition of [human beings] and sound intellect. Allaah [The Most High] said:

The Prophet [sallal-laahu-alayhi-wasallam] said, ”Every newly born child is born in a state of fitrah [i.e. upon a natural inclination to worship Allaah (alone)], and it is his parents who make him into a Jew, a Christian or fire-worshipper……”

The Prophet [sallal-laahu-alayhi-wasallam] said that Allaah said: ”Indeed, I created my servants as Hunafaa [i.e. inclined towards monotheism and distanced from polytheism], but the devils divert them from their true religion [of Islamic monotheism]”.

This shows that those who nurture the people upon the sound Islamic creed are the callers to that which is in agreement with the natural disposition and sound intellect, as opposed to the false creeds because they are in opposition to the natural disposition and sound intellect. Those who call to false creeds utilise lies, deceit, fables, dreams etc…. to spread those false and deviated creeds.

The false creeds and their adherents contradict each other, but as for the sound Islamic creed, its people do not contradict one another. Allaah [The Most High] said:

”Do they not then consider the Qur’an carefully? Had it been from other than Allah, they would surely have found therein many contradictions.” [Soorah An-Nisaa: Ayah: 82]

”Falsehood cannot come to it from before it or behind it (it is) sent down by the All-Wise, Worthy of all praise (Allah)” [Soorah Fussilat: Ayah: 42]

The sound Islamic creed founded upon the Qur’aan and the Sunnah- free from falsehood. Falsehood cannot come to it because it is founded upon a pure source.  As for the other creeds, they are based on contradictions and differences, and ”certainly, you (i.e. people of false creeds) have different ideas (about Muhammad and the Qur’an). Turned aside therefrom (i.e. from Muhammad and the Qur’an) is he who is turned aside (by the Decree and Preordainment of Allaah)

The sound Islamic creed is clear and there are no obscurities in it, as opposed to the creed of the falsifiers. Its fundamental principles and evidences are clear, as opposed to the other creeds. For example one of the people of philosophical rhetoric wrote a very abstruse treatise on the knowledge of the existence of Allaah and then said that none will comprehend it, except someone who is firmly grounded in knowledge. Ibn Abil Izz Al-Hanafi (rahimahullaah) said that one of the philosophers said: ”I spent all night looking at the evidences of the philosophers till morning came, but I could not understand anything.”

The sound Islamic creed unites the hearts and prevents hatred and rancour between the people; rather it even unites creatures that different from one another. For example, look at the bond between the angels and the pious people amongst the children of Aadam, Allaah said:

”Those (angels) who bear the Throne (of Allah) and those around it glorify the praises of their Lord, and believe in Him (i.e. believe in the oneness of Allaah), and ask forgiveness for those who believe (in the Oneness of Allah) (saying): “Our Lord! You comprehend all things in mercy and knowledge, so forgive those who repent and follow Your Way, and save them from the torment of the blazing Fire!’’ [Soorah Ghaafir: Ayah: 7].  So they (i.e. the angels) supplicate and ask Allaah to forgive the believers, and this bond between them and the believers is due to the sound Islamic creed they share.

”And He has united their (i.e. believers’) hearts. If you had spent all that is in the earth, you could not have united their hearts, but Allah has united them. Certainly He is All-Mighty, All-Wise.” [Soorah Al-Anfaal: Ayah: 63]

It is Allaah Who unites (the hearts of the) believers through the sound Islamic creed and this is why Allaah (The Most High) said:

”The believers are nothing else than brothers (in Islamic religion)” [Soorah Al-Hujuraat: Ayah: 10]

As for the bond you find between the people of corrupt creeds, they are all disconnected. Allaah (The Most High) said:

”When those who were followed, disown (declare themselves innocent of) those who followed (them), and they see the torment, then all their relations will be cut off from them. [Soorah Al-Baqarah: Ayah: 166]

”Whoever works righteousness, whether male or female, while he (or she) is a true believer (of Islamic Monotheism) verily, to him We will give a good life (in this world with respect, contentment and lawful provision), and We shall pay them certainly a reward in proportion to the best of what they used to do (i.e. Paradise in the Hereafter).’’ [Soorah An-Nahl: Ayah: 97]

A good life is dependent upon Eemaan and righteous actions. Allaah (The Most High) said:

”Ta-Ha. [These letters are one of the miracles of the Qur’an, and none but Allah (Alone) knows their meanings.] We have not sent down the Qur’an unto you (O Muhammad) to cause you distress. ‘’ [Soorah Taahaa: Ayah:1-2]

Shaikhul Islaam Ibn Taymiyyah (rahimahullaah) said: The hearts were created to be upon Tawheed, but when they abandon what they were created for, they become confused and bewildered. The heart’s need of Tawheed and remembrance of Allaah is like a fish’s need for water. A fish dies when deprived of water and likewise the heart dies when deprived of Tawheed and remembrance of Allaah.

The sound Islamic creed is a creed of uprightness and justice- neither going beyond bounds nor falling short, as opposed to the other creeds. There is not an affair in the religion- be it the beliefs, acts of worship and its laws—except that the people are divided into three categories in that regard; [a]The Extremists [b]Those who fall short and [c]Those who remain upon uprightness and justice upon the sound creed-those who cling to the Qur’aan and the Sunnah.