During the Janaazah prayer does the Musallee (i.e. praying person) look at the place of his Sujood just as in the other prayers, or is that not obligatory? And what should he do if he missed more than one Takbeer of the Janaazah prayer?

The Sunnah (legislated) for the praying person in the Janaazah prayer and other than the Janaazah (prayer) is that he looks at the place of his Sujood, so that neither absent-mindedness nor carelessness occurs in the prayer, and thus he (establishes) khushoo. This is better.   If he catches some of the prayer, then what he catches is (considered to be the first part) of his prayer, (and) this is better. And what he makes up is (considered to be the) last of it (i.e. the last part of his prayer).

Written by The Salafi Centre of Manchester on February 28, 2014. Posted in Uncategorized. 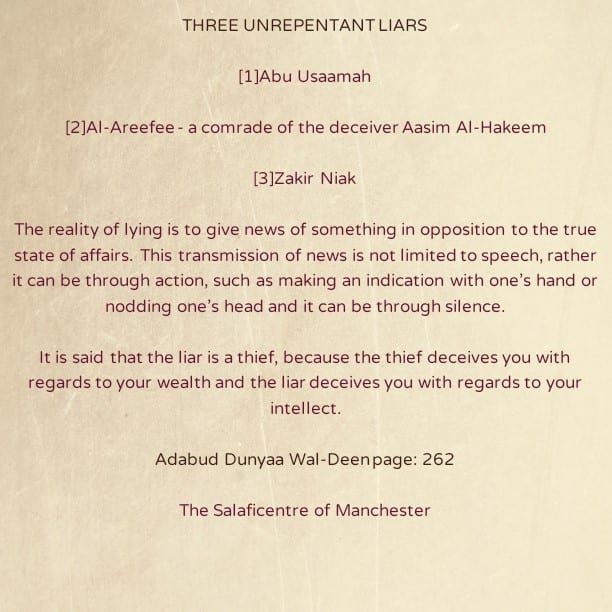 Written by The Salafi Centre of Manchester on February 25, 2014. Posted in Morals and Manners - 'Akhlaaq'.

The reality of lying is to give news of something in opposition to the true state of affairs. This transmission of news is not limited to speech, rather it can be through action, such as making an indication with one’s hand or nodding one’s head and it can be through silence.

Indeed, these three liars have not given news in opposition to the real state of affairs due to a mistake or forgetfulness; rather they deliberately lied in order to support their deviated methodologies. They persist upon their lies and are too proud to repent after it has become manifestly clear to them that they are guilty of lying and slander. This lying and slander employed against the Salafiyyoon –by these three deviants and those similar to them– is founded upon malice, deceit, deviation and unfounded evil suspicion towards the people of truth and Salafiyyah.    Al-Allaamah Rabee Bin Haadee Al-Madkhalee (may Allaah preserve him) stated:

”Destructive Good Suspicion is to have a good suspicion of the people of falsehood whether are they disbelievers, innovators or evil (open) sinners. And that which led the disbelievers to belie the Messengers, (harbouring) a severe disbelief in them and their message was due to their evil suspicion towards the people of truth (i.e. the Prophets and their true followers), and having a good suspicion of their forefathers and their religions of falsehood and disbelief.

Ahlul Bidah such as the rawaafid, the khawaarij, the soofiyyah, the murji-a, the qadariyyah and the people of Tahazzub Al-Baatil (false partisanship) are destroyed by good suspicion towards their shuyookh, figureheads and corrupt creeds. On the other hand, they are destroyed by their evil suspicions towards the truth and its people.  [Paraphrased and Abridged: For further details see: [Majmoo Fataawaa Al-Allaamah Rabee: 13/363-364]

On the 25th July 2012, Abu Usaamah gave a video-recorded lecture in which he claimed that he was giving ‘Sincere Advice’.  He claimed that Ustaadh Abu Khadeejah utilised the speech of Imaam Albaanee (rahimahullaah) in a deceitful manner in order to show that Abdur-Rahman Abdul-Khaaliq is an innovator.

This lie became ever more serious when one realizes (as is apparent from the video) that Abu Usamah was holding a printed copy of the blog post in front of his face for most of the lecture, yet he never once read where Ustaadh Abu Khadeejah had said that Shaikh al-Albaanee (rahimahullaah) had made tabdee’ on Abdur-Rahmaan Abdul-Khaaliq or even implied it. In a whole hour and more, not once did Abu Usaamah read this alleged assertion of Abu Khadeejah?

Abu Usaamah stated that he had a copy of Ustaadh Abu Khadeejah’ saved “in case it is taken down”! In that post Ustaadh Abu Khadeejah stated: ”Abdur-Rahmaan Abdul-Khaaliq is the leading figurehead of the group Ihyaa Turaath of Kuwait – he was refuted by numerous major scholars, including the Shaykh, the Muhaddith and Imaam Al-Albaanee (rahimhullaah). He was declared an innovator by the Imaam of Yemen Muqbil bin Haadee (rahimahullaah).”

So Ustaadh Abu Khadeejah clearly made a careful distinction between the refutation of al-Albaanee and the tabdee’ of Shaikh Muqbil (rahimahumallaah), which Abu Usaamah failed to make mention of throughout his hour long rant…… [Abridged and paraphrased For further details, see: http://www.salafitalk.com/threads/1216-A-Response-to-the-Deceit-of-Abu-Usaamah-Khalifah-and-His-Lying-Tongue]

See Tweet by Ustaadh Amjad Rafiq (may Allaah preserve him)

We seek Allaah protection from the liars amongst mankind and Jinn.. Aaameen

“UK Salafis Make Takfeer of one another” (!?!) Has Zakir Naik [Ignorant- Shameless liar] repented from this Slander?!

How numerous are those who tell lies today against the carries of Salafiyyah and its callers! And to what extent do they (spread) rumors carried from them until they reach distant lands! They hinder men from the path of Allaah by way of them and seek crookedness therein, and to aid falsehood, spurious affairs, innovations, affairs that are destructive to the sound creed and methodology and the virtuous manners.

Blatant lies Mr Zakir Naik… They lie upon Ahl al-Sunnah because their da’wah depends upon it. pic.twitter.com/4ZnN8iOqLO 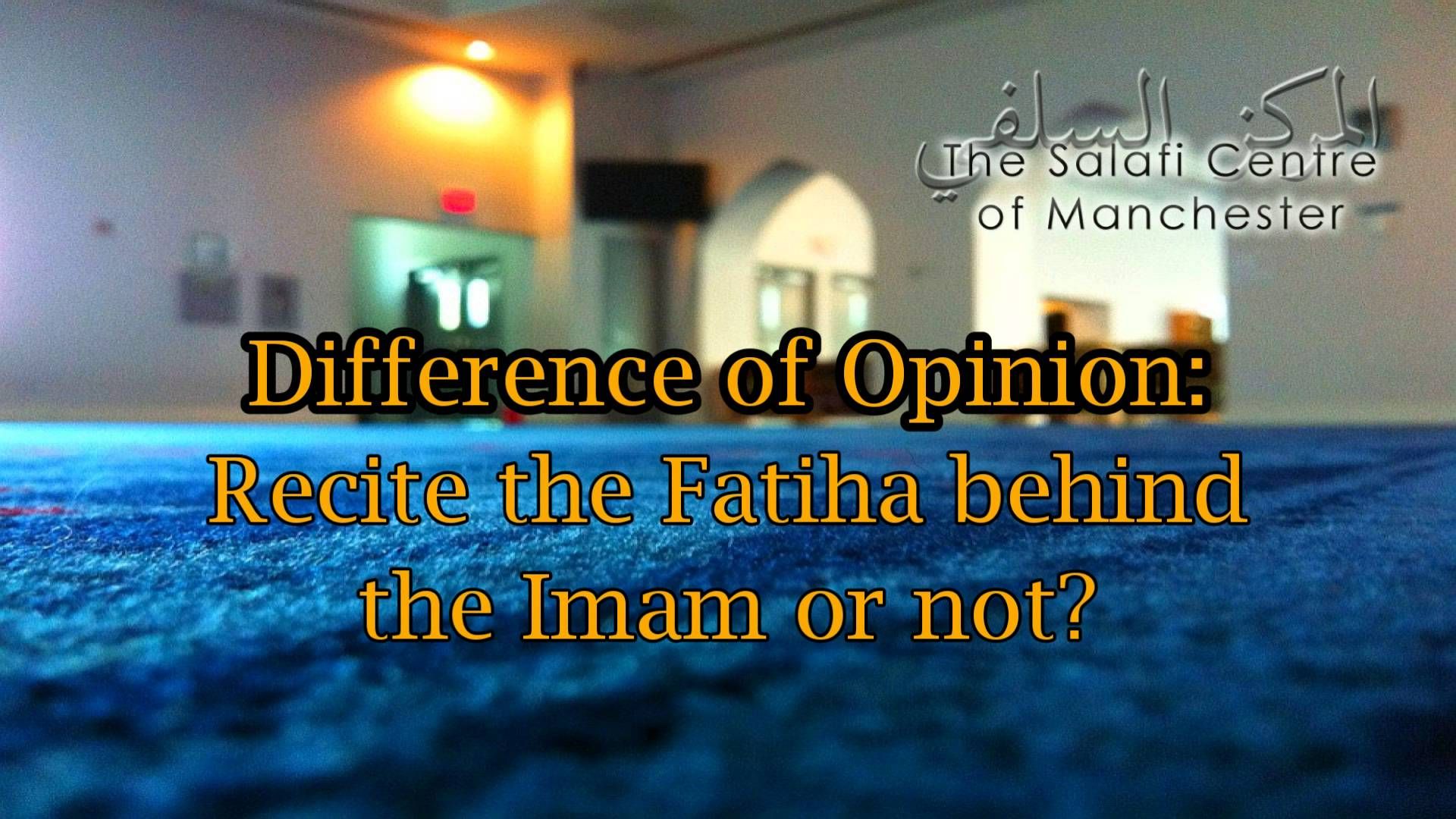 Recite Surah al-Fatiha behind the Imām or not? | Abu Muadh Taqweem Aslam

Written by The Salafi Centre of Manchester on February 21, 2014. Posted in Video.

Question: Brixton Masjid Admin and Staunch Affiliates –[Halabiyyoon]—which group do you belong to?!

As for the followers of a leader from amongst the people of desires, then in most cases they are of two categories:

Those who possess knowledge, but they harbour evil intentions; so they yield to Satan, desires and the urge of the evil soul. They follow the people of misguidance and oppose the callers to guidance (in that which) Allaah sent His Messenger Muhammad (sallal-laahu-alayhi-wasallam) with.

Their share of knowledge is little, so the people of desires take advantage of them and they become (part) of their group. They convince them that what they call them to is the manifest truth and that what their opponents are upon is falsehood. And they convey to them a huge (number) of affairs that resemble the truth but are falsehood in reality, in order to deceive them and submerge them into misguidance.

The Ghuluww in Yahya Al-Hajuri by Affiliates of Brixton Masjid

Written by The Salafi Centre of Manchester on February 20, 2014. Posted in Uncategorized.

The Ghuluww in Yahya Al-Hajuri by Affiliates of Brixton Masjid

Imaam Muhammad Ibn Saaleh Al-Uthaymeen (rahimahullaah) stated in his Tafseer of Juz Amma that [Allaah began with (mention) of Abu Lahab’s two hands: ”Perish the two hands of Abu Lahab” because they are the instruments of work and movement, giving and taking.

Likewise, we find the scholars mentioning that Allaah censured Abu Lahab with this great censure, which is ignominy for him in this life and the next–a complete loss and wretchedness, and he will achieve no success. He died a disbeliever and was not benefited by his worldly possessions.

Yahyah Al-Haddaadi (may Allaah guide him) makes a du’aa against Shaikh Abdullaah Al-Bukhaari, whilst seeking to defend his Haddaadiyyah: Click here and listen ”May you perish O Bukhaari just as the two hands of Abu Lahab perished, and perish he!”

Now reflect upon the precise statement of Shaikh Rabee:

”Yahya Al-Hajuri Is More Evil Than the Haddaadiyyah and the Ideas of the Kharijites Have Penetrated Him and His Followers.”

We seek Allaah’s protection from falsehood and excess.. Aameen

Some of the satanic behaviour of the Deviated Extremist Haddaadiyyah

Written by The Salafi Centre of Manchester on February 19, 2014. Posted in Uncategorized.

Some of the satanic behaviour of the Deviated Extremist Haddaadiyyah

They first started speaking ill of Imaam Nawawi, Al-Haafidh Ibn Hajr, Imaam Ash-Shawkaani and some of the contemporary scholars, such as Imaam Al-Albaani (may Allaah bestow Mercy upon them).

Then they increased a bit more—in evil speech– and included some of the contemporary scholars, such as Shaikh Rabee and other than him from the virtuous people of knowledge (may Allaah preserve them).

Then they embarked upon speaking ill of the texts of the Qur’aan and the Sunnah….

[Paraphrased and abridged from a statement of Shaikh Ahmad Zahraani (may Allaah protect him): see link: http://www.sahab.net/forums/?showtopic=134117%5D