We have seen time and again, those who harbor hatred for Ahlus Sunnah, jumping aboard anything they believe they can use to gain some plus points with their followers, in their attempt to garner fame and belittle the Salafis.

This has been the case time and again over the years with Abu Eesa Niamtullah of al Maghrib institute, who attempts to pull the wool over the eyes of his followers by taking the supposed “higher ground” in terms of understanding. This was in reference to Abu Hakeem Bilaal Davies merely explaining the origins of the croissant, to which Abu Eesa wrote: 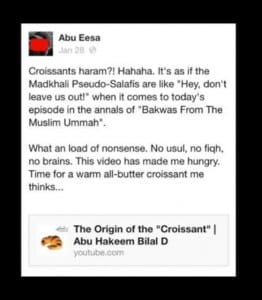 However maybe if he had indeed listened to the recording properly and thoroughly first, without attempting to mock that which wasn’t present, then it would have spared us from having to clarify his silliness. Alas it seems some people lack intellect and so to make it as easy and as simple as possible, so that he can “understand” what was meant by the video, Ustaadh Abu Hakeem Bilal Davis (hafidahullah), responding regarding the issue of the “Croissant.”

The reader will see how Abu Eesa Niamatullah and other than him have purposely blown the issue out of proportion just to attack the Salafis, and blur the truth for the common people. This blurring the lines between truth and falsehood is well known from him and his past here in which he attempted to take people to his beloved Shaykh Kehlan, as well as harbor those who attack the scholars of Sunnah – more details here.

Allah says in His Quran:

O you who believe! If a rebellious evil person comes to you with a news, verify it, lest you harm people in ignorance, and afterwards you become regretful to what you have done. [Qur’an 49:6]

Abu Hakeem, may Allah protect him, has never claimed that eating a Crossaint is ‘haram’. Listen to the audio again carefully!

Secondly, this lecture was given under the context of the lecture entitled: “The Origins of Christmas.” and hence was given as an example to show some the origins of things that we are familiar with today and then to go on and show the origin of the rituals practiced by Christians in Christmas. He was merely making the point that knowing the origin of something can makes ones perception change.

Only a shameful liar would claim otherwise.

“You only need to prod him once and the “pathological hatred” he harbours (whilst accusing others of it) pours out like water out of a jug, and that which he accuses the Salafis of (of unjust rulings on people), pours out freely, without hindrance from his heart and soul with the ferociousness of a lion, yet the thought and intelligence of a domestic turkey” www.salafis.com

We await your public Tawbah: http://www.salafis.com/articles/puesiwh-1st-open-letter-to-abu-eesa-niamatullah-to-make-tawbah-to-allaah-and-apologise-for-his-slanders.cfm