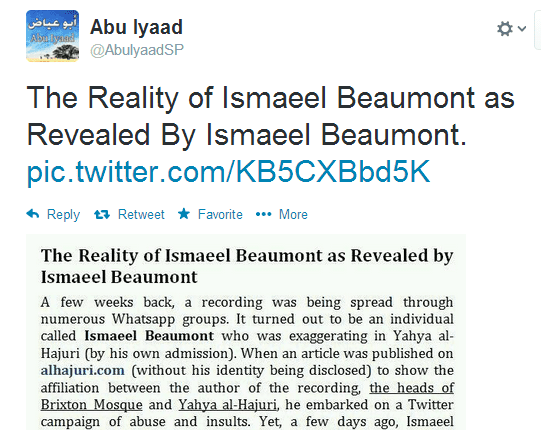 Another thorn for Abul Abaas Naveed Ayaaz’s racist-hizbi friend from Manchester (the Manchester based supporter of the Mubtadia (Halabi, Maribi etc) and supporter of Masjid Sunnah in Manchester) who is attempting to sow seeds of shubuhaat.

See the picture on this tweet by Ustaadh Abu Iyaad, which clarifies the situation of Isma’eel Beaumont: pic.twitter.com/KB5CXBbd5K]   nullifies the racist-hizbi’s recent claims regarding the dispute between Abdul-Wali and Ismaeel Beaumont

The Manchester Based Racist Hizbi is extremely enraged because brother Abdul Wali recanted from his mistake [ see link: http://salaficentre.com/?p=12226] but the hizbi-racist is not able to abandon the innovators and their supporters!

Concerning the statement of Imaam Fudayl Ibn Iyaad (rahimahullaah): ‘If Allaah (the Mighty and Majestic), knows that a man hates a person of innovation, He will forgive him even if his actions are few.’ Al-Allaamah Saaleh Al-Fawzaan (hafidha-hullaah) said: Because this (i.e. hatred for a person of innovation) is from loving and hating for the (sake of Allaah)– love for the people of Imaan and hatred for the enemies of Allaah.  This is a fundamental principle from the fundamental principles of Aqeedah. [Source: It-haaful Qaaree Bitta’liqaat Alaa Sharhis Sunnah Lil Imaam Barbahaaree (rahimahullaah). Vol 2: page:325-326]

Allaah’s Protection is sought! Neither has the racist-hizbi of Manchester freed himself from the figureheads of bid’ah (Halabi, Maribi, Magharaawi, etc.) nor has he repented from his racist remarks.

May Allaah Guide Him