As more time passes by from the onset of this affair instigated by IslamNelson through a barrage of boisterous and crazed tweeting against the Salafis, the greater the details of the exposition upon IslamNelson emerge. By Allah we ask, was there any need for them to attack the Salafis? Was there any need for them to slander and lie using their twitter account against the Salafis? What did they wish to achieve, when it is only themselves who would eventually be exposed?!

Of course, the usual cries of “lies” and “slander” are not surprising from their camp, although they will be required to explain what part of the testimonies against them thus far are lies and slander? [!] The host of the ‘Eid Day gathering exposing Naveed Ayaaz, a lie or slander?

Very simply, no [rather it is IslamNelson who lied and slandered him yet have decided to conveniently disappear without any public retraction, perhaps Naveed Ayaaz could explain in his lesson the outcome of the one who dies upon oppressing another, the lesson that is attended by some from Oldham, although that apparently did not sound as well as they wished, hence a quick delete of the tweet and a replacement with Manchester and Accrington added for good measure!].

The posters advertised by IslamNelson and their nearby affiliates are lies and slanders? Very simply, no, they are real and physical for all to have seen. See Picture: 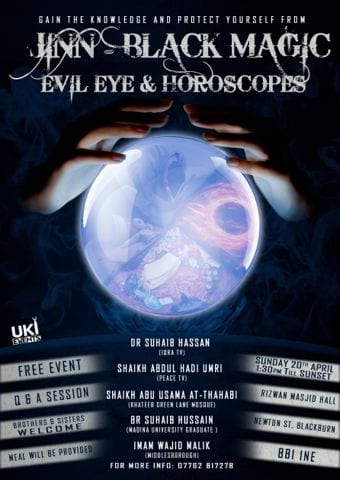 The imbecilic racist secret agent putting up the last line of response on behalf of Naveed Ayaaz and IslamNelson, the coward who has peaked at such levels of cowardice in writing from a secret email address that arguably other cowards would be ashamed to be seen with him, [perhaps at the library or elsewhere] – is that a lie or slander? Very simply, no. The emails are there and present and available for anyone who wishes to see [!]

Hence, simply crying out loud with an elevated voice “lies” and “slander” is futile, as much as they would now wish to escape from the calamity they have entered themselves into.

We now find ourselves presenting to the reader a defence of the noble scholars Shaikh Rabee’ and Shaikh ‘Ubayd حفظهما الله after we became aware in recent times of the disgraceful and belittling comments that emanated from the IslamNelson hierarchy indicating a complete and utter lack of respect for our noble scholars. 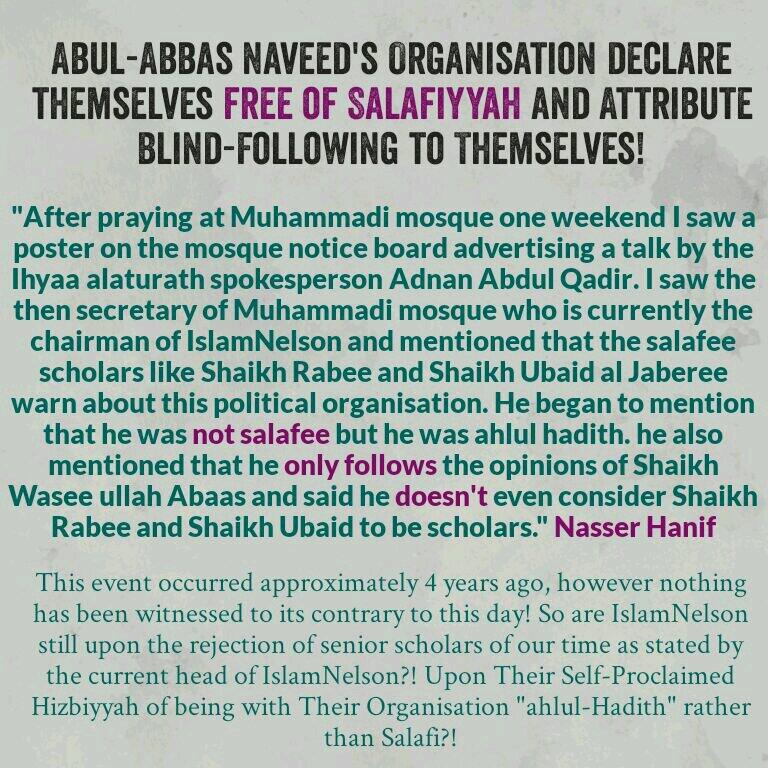 A brother from Nelson has testified (see above testimony) to the fact that the IslamNelson hierarchy [currently under the guidance of Naveed Ayaaz and being lead by him, as the crazed tweeter Abu Mus’ab Naman Yasin has mentioned] has stated previously that Shaikh ‘Ubayd al-Jaabiry and Shaikh Rabee’ al-Madkhaly حفظهما الله are not even considered from the scholars! That only Shaikh Wasee’ullah’s opinions are followed!

What a pitiful reality that has emerged of Naveed Ayaaz’s IslamNelson! Ascribing to themselves blind-following rather than evidences. The statement is in many ways similar to the blind followers of Imam Abu Haneefah رحمه الله who state they only follow his opinions!

It such a shame that this Naveed Ayaaz has returned to find himself silenced by his allies from speaking the truth, little wonder he nor IslamNelson clarify the completely absurd nature of their comments regarding the noble scholars Shaikh ‘Ubayd and Shaikh Rabee’ حفظهما الله. We will now present to the reader a brief selection of the statements of the people of knowledge regarding the two noble scholars:

We ask Allah to preserve our noble scholars and protect them from those who hold malice toward them from the defenders of Hizbees and otherwise.