Seal the month of Ramadhaan with Repentance (Tawbah) – Shaykh Uthaymeen 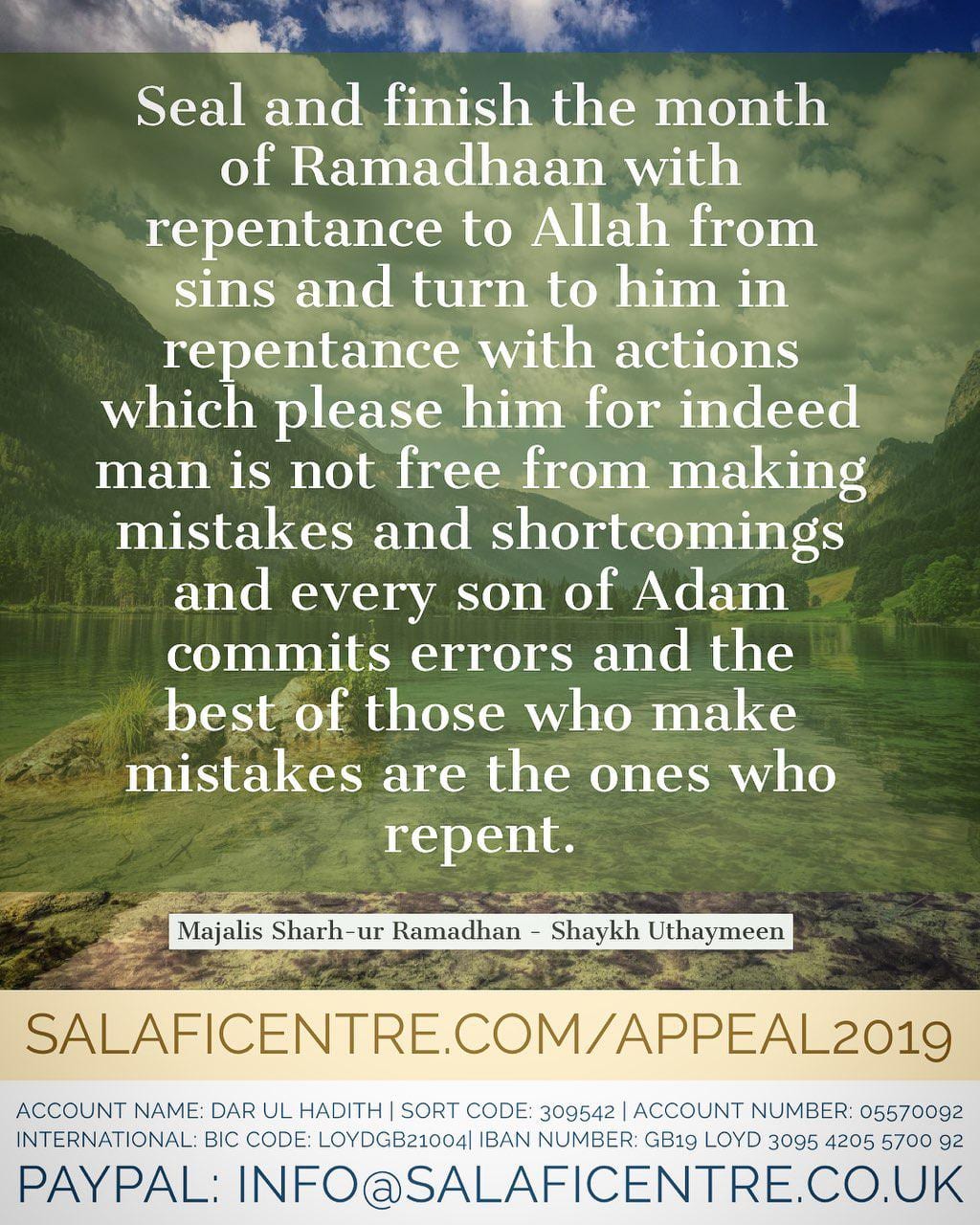 Seal and finish the month of Ramadhaan with repentance to Allah from sins and turn to him in repentance with actions which please him for indeed man is not free from making mistakes and shortcomings and every son of Adam commits errors and the best of those who make mistakes are the ones who repent.

And (commanding you): “Seek the forgiveness of your Lord, and turn to Him in repentance, that He may grant you good enjoyment, for a term appointed, and bestow His abounding Grace to every owner of grace (i.e. the one who helps and serves needy and deserving, physically and with his wealth, and even with good words). But if you turn away, then I fear for you the torment of a Great Day (i.e. the Day of Resurrection). (Surah Hud Verse 3)

Say (O Muhammad SAW): “I am only a human being like you. It is inspired in me that your Ilâh (God) is One Ilâh (God – Allâh), therefore take Straight Path to Him (with true Faith Islâmic Monotheism) and obedience to Him, and seek forgiveness of Him. And woe to Al-Mushrikûn.  (Surah Fussilat Verse 6)

And all of you beg Allâh to forgive you all, O believers, that you may be successful 9Surah Nur Verse 31)

O you who believe! Turn to Allâh with sincere repentance! It may be that your Lord will remit from you your sins, and admit you into Gardens under which rivers flow (Surah Tahrim Verse 8)

And the verses mentioning the issue of repentance are many. As for the ahadith that mention tawbah then from them are:

Al-Agharr ibn Yasar al-Muzani said that the Messenger of Allah, may Allah bless him and grant him peace, said: “O people! Turn in repentance towards Allah and ask His forgiveness. For verily I turn towards Him a hundred times a day.”[Muslim]

‘Abu Hurayra said, “I heard the Messenger of Allah, may Allah bless him and grant him peace, say, ‘By Allah, I ask Allah’s forgiveness and turn towards Him in repentance more than seventy times a day.” [Bukhari]

Anas ibn Malik al-Ansari, reported that the Messenger of Allah said, “Allah has greater joy at the repentance of one His slaves when he turns towards Him than one of you would have over his mount, which, having escaped from him with his food and drink in the middle of the desert so that he has despaired of finding it and gone to a tree to lie down in its shade, suddenly appears standing by him while he is in that state, so that he takes its reins and then says out of the intensity of his joy, ‘O Allah, You are my slave and I am Your Lord!’ getting confused because of his intense joy.’’ [Muslim]

He subhaanah is only pleased with the repentance of his slave because of his love of repentance and pardoning and the returning of the slave after being far away from Him. Anas ibn Malik and Ibn ‘Abbas reported that the Messenger of Allah, may Allah bless him and grant him peace, said: “If the son of Adam possessed a valley full of gold he would want to have two valleys, yet his mouth will only be filled by earth. Allah turns towards those who turn in repentance.” [Agreed upon].

So repentance it is the returning from the disobedience of Allah to his obedience because he subhaanahu is the one who truly deserves worship and the reality of worship is submitting and surrendering to the One that is worshipped with love and glorifying Him.

So when there occurs from the slave an absence of obedience for his lord he repents to him, returns to him.

We ask Allah for Tawfeeq in this life and the next