To Bring Down [or Disparage) The Leading Figureheads [i.e. Those Who Give Dawah] Is a Difficult Affair 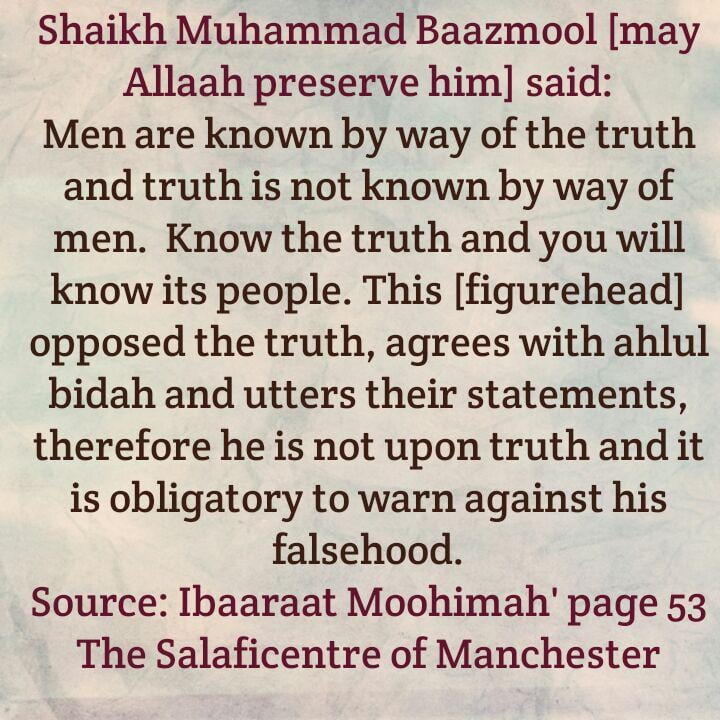 This is how some of the people justify their stances towards Bidah and its people.  So whenever Bidah occurs from one of those people with fame, he refrains from exposing the bidah of that famous person and refrains from warning against him, [whilst claiming]  that to bring down the leading figure heads is a difficult affair.

This is a false justification from different angles.  From them:

[2]The obligation [in relation to this affair] is to give advice, enjoin good and forbid evil.  His fame is brought to an end due to his bidah- as a warning and sincere advice to the Muslims, so that they do not fall into the falsehood he has fallen into.

[3]Truth is above everyone and from the well-known statements in that regard is [the statement]: ‘’So and so is beloved to me, but the truth is more beloved to my heart than him.’’

Therefore, when you wilfully incline towards such and such a person and keep quiet about his bidah, you have given him precedence over the truth and raised him above it. And what is there after truth except misguidance!  So regarding this [stance of yours], you have given precedence to this person -who describe as a leading figure- over the truth and thus you fall into misguidance.

[4]This saying [i.e. it is difficult to bring them down etc] is in opposition to the way of the pious predecessors, [for] they used to speak about the people.

[5]The application of this statement is in opposition to the clear methodology established by the pious predecessors with regards to acquiring knowledge, and that is: ‘Indeed this knowledge [of the sharee’ah] is Religion, so look to the one you take your religion from.’’ Therefore, how about your situation with a man from whom you take Hadeeth, Tafseer, Aqeedah and Fiqh? Do you either keep quiet about the bidah he has [based on your] claim that speaking against the leading figure heads is a difficult affair, or do you speak about him and his innovation- making his affair well known as a warning and advice, so that the people are not deceived by him and his bidah? There is no doubt that what is obligatory is to give clarification, otherwise your silence is a fraud and deception against the Muslims. And perhaps you will be the cause of his bidah and and misguidance being spread amongst the people due this [silence of yours].

[6]The reality of this statement [i.e. it is hard to bring them down] is itself an application of the manhaj of Muwaazanaat [Ref 1].  It [i.e. Muwaazanaat] is a false methodology that ruins and dilutes the Religion, whereas the truth is clear and sublime.  And within this [Muwaazanaat] is termination of the truth and disappearance of its people, except that which Allaah wills.

[7]This statement [i.e. it is hard to bring them down] embraces illegal partisanship. It [embraces] love and hate for the sake of the one being described as a leading figure head.  He [i.e. this figure head] is made a basis for love and hate in replacement of the truth, and this [attitude] is from the characteristics of those people who follow the satanic paths- those who call their adherents to the hell fire.

[9]What is a leading figurehead in your view? In your view, how did this man become one of the leading figure heads?  Who is it that has either clarified for you or him that he is a leading figure head?  O my brother, a person should know his limitations.  It has been reported in an authentic hadeeth from Iyaad Bin Himaar that the Prophet (sallal-laahu-alayhi-wasallam) said: ‘Allaah revealed to me that you must be humble, so that no one is haughty towards another person nor oppressive towards another person.’

[10]The lowering of a man or being raised is something in the hands of Allaah, and He [The Most High] alternates it how He pleases and it is not in our control.

Fulfil the obligation you have been commanded and that is to clarify the truth; disapprove evil and warn against the bidah of this figure head.  If he accepts the [truth], humbles himself, returns to the [truth] and repents to Allaah, then Allaah will raise his status if He [The Most High] wills because Allaah raises one who humbles himself in His presence. But if he oppresses and transgresses, then this man is from Ahlul Bidah; [so] how can you shed tears for him and that he has been degraded?! Glorified Be Allaah and Free is He from all imperfections, weaknesses and faults! [Source: Ibaaraat Moohimah’ pages 53-55’ abridged and slightly paraphrased]

Ref A: See articles about the bidah of Muwaazanaat:  http://www.salafipublications.com/sps/sp.cfm?secID=MNJ&subsecID=MNJ12&loadpage=displaysubsection.cfm