”The Messenger of Allaah (sallal-laahu-alayhi-wsallam) gave us an admonition that made our hearts fearful and our eyes tearful. We said, “O Messenger of Allaah, it is as if this were a farewell sermon, so advise us.”He said, “I enjoin you to have Taqwa of Allaah and that you listen and obey, even if an Abyssinian slave is place in charge over your affairs; for indeed he who lives long among you will see many differences. Beware of newly invented matters (in the religion), for indeed it is misguidance. So whoever among you reaches that then upon him is (to follow) my Sunnah and the Sunnah of the rightly guided khulafaa and bite on to it with your molar teeth.” [1]

These three affairs (i.e. Tawheed; obedience to the rulers and caution against bidah and the innovators) combine that which establishes the religious and worldly affairs of the people. Shaikhul Islaam Muhammad Ibn Abdul Wahhaab (rahimahullaah said: Defects have not occurred in the religion of the people and their worldly affairs, except as a result of defects in these three affairs or in some of them. [3]

Some People Gather to Waste Time, Yet Wish that Sensible People Should Join Them!

Written by The Salafi Centre of Manchester on January 30, 2016. Posted in Pearls of Wisdom, Purification of The Soul.

Imaam Ibnul Qayyim (rahimahullaah) said: ”The greatest profit in the worldly life is that you preoccupy yourself- every time- with what is more worthy (or obligatory), and with what is more beneficial for (you) in the hereafter”. [Al-Fawaa’id..page 60] 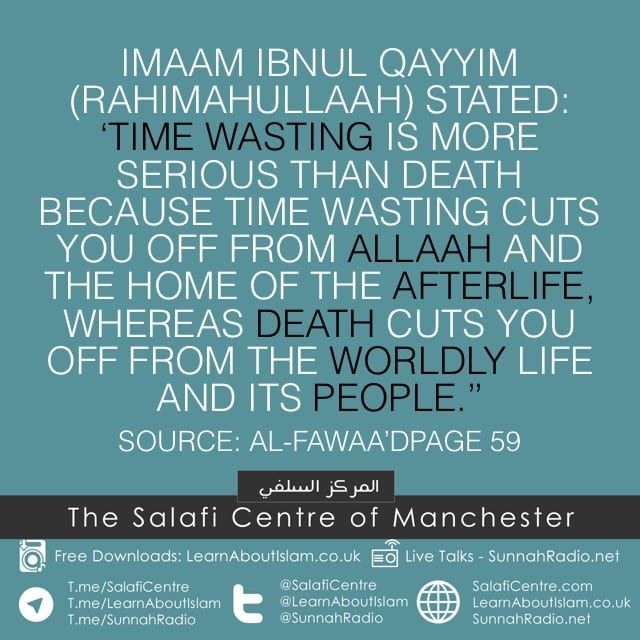 Written by The Salafi Centre of Manchester on January 30, 2016. Posted in Morals and Manners - 'Akhlaaq', Purification of The Soul.

Written by Abdullah Jallow on January 30, 2016. Posted in Morals and Manners - 'Akhlaaq', Purification of The Soul, Scholars of Islam.

Ameerul Mumineen Umar Ibnul Khattaab (radiyallaahu-anhu) stated: ”Indeed, we are a people whom Allaah has given honour by way of Islaam; so when we (begin) to seek honour through other than what Allaah has given us honour, Allaah will degrade us!

Written by The Salafi Centre of Manchester on January 26, 2016. Posted in Purification of The Soul.

Shaikh Uthaymeen (rahimahullaah) said: “Whenever your heart is heedless and your soul absorbed in the worldly life, then go forth to the graves and ponder upon the (affair) of those people who were like you on the earth yesterday (or not long ago). 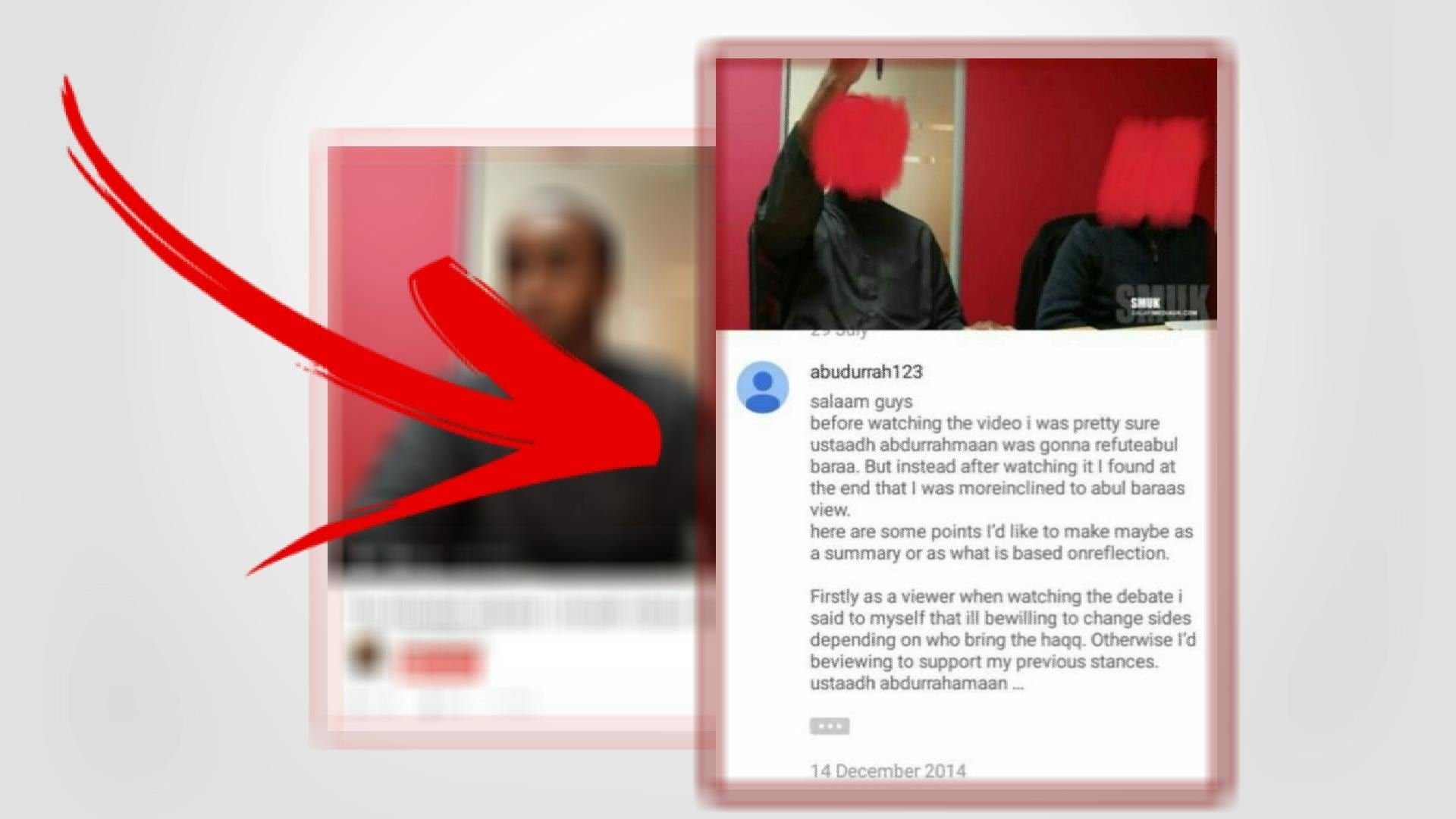 YouTube Celebrity DIY-Da’īs & their “Public Debating” Hype: The Stance of the Salaf

Written by The Salafi Centre of Manchester on January 25, 2016. Posted in Video.

Fitna of a Wicked Scholar and an Ignorant Worshipper

Written by Abu Aa'isha Amjad on January 25, 2016. Posted in Uncategorized.

Imaam Sufyaan Ath-Thawri (rahimahullaah) said: I seek Allah’s Refuge from the fitna of the ignorant worshipper and the fitna of the wicked scholar, for indeed their fitna is the trial of everyone who is put to trial. [1]

Imaam Ibnul Qayyim (rahimahullaah) said: Indeed the people follow their scholars and righteous worshippers, so if the scholars are wicked and the worshippers are ignorant, then the calamity through them will be widespread and the fitna will (have a) great (effect) on individuals and the general masses.[2]

Haatim Al-Asam: I Gain The Upper Hand Over The One Who Argues With Me Through Three Affairs!

Written by Abu Aa'isha Amjad on January 24, 2016. Posted in Uncategorized.

I have three traits by way of which I gain the upper hand over the one who argues with me! They (i.e. the people) said: “What are they?” He said: “I am happy when the one who argues with me is correct. I am sad when he is mistaken and I prevent myself from being disrespectful towards him.” This (statement of Haatim) reached Imaam Ahmad Ibn Hanbal (rahimahullaah), so he said: ”Glorified be Allaah and free is He from all imperfections! What a judicious man he (Haatim) is!”

Steadfastness upon the Sunnah’ by Shaikh Rabee (may Allaah preserve him)

Written by The Salafi Centre of Manchester on January 24, 2016. Posted in Da'wah - Calling To Islam, Methodology - 'Manhaj', Purification of The Soul, Scholars of Islam, Worship - 'Ibaadah'.

Indeed steadfastness upon the Sunnah means steadfastness upon Islaam in its entirety; it’s Usool (Foundations), its Furoo’ (Branches), it’s Aqaa’id (affairs of creed, belief); it’s Manaahij (Methodologies).  We (must) remain steadfast upon it and we (must) hold tightly onto it, up until we meet Allaah (The Blessed and Most High).

And indeed the Aayaat concerning the religious obligations of ittibaa’ (following), iltizaam (adhering), i’tisaam (clinging) and istiqaamah (steadfastness) are many. And Ahaadeeth likewise, all of which point towards one goal or aim and this is the steadfastness of the Muslimeen upon Islaam.

And if one were to speak about steadfastness upon the Sunnah, it is not that which is understood by the majority of the people with regards to the word Sunnah, rather its intent here is Aqeedah and Manhaj, meaning Islaam, meaning steadfastness upon Islaam.

And the Sahaabah, radhiyallaahu-Anhum said:  “By Allaah! If it were not for Him, we would not have been guided, We would not have given(in charity), nor would we have prayed”.[1] Meaning, they (the companions) knew and understood that Guidance from Allaah (The Most High) was a blessing and a virtue from Him, and a mercy from Him to whomsoever He selects from His Servants.

“He selects for His Mercy (Islam and the Quran with Prophethood) whom He wills and Allah is the Owner of Great Bounty”. [3:74]

He (Glorified and Exalted Be He) blesses whom He wishes and gives virtue to whomsoever He wishes with His Guidance. He gives them Good and He grants them Tawfeeq and blesses them with His protection from deviation and misguidance.

The statement ‘He Misguides whom he Wills’: The misguidance here refers to complete misguidance, such as kufr and (one’s) exiting from (the fold of) Islaam – We seek Refuge with Allaah (The Most High) from that. And as for the Partial misguidance: This refers to the misguidance of one who enters into Islaam and he then deviates in his Aqeedah (beliefs) and in his Manhaj (Methodology) – We seek refuge with Allaah from that. [End Of Shaykh Rabee’s Speech.This particular extract is from the risaala, Ath-Thibaat Ala As-Sunnah (Steadfastness upon the Sunnah)].

May Allaah Preserve and reward Al-Allaamah Rabee’ Ibn Hadee ‘Umayr Al Madkhalee for this important reminder. We Ask Allaah to keep us firm upon this blessed Salafi Path and that He does not deviate our Hearts due to our own deeds. Aameen

This extract was translated and shared by one of our Salafi Shabaab from Birmingham. May Allaah preserve him and make him a source of khayr for the Ummah and his parents. Aameen