Allah Sees Me, Hears Me and Knows What I Will Do – Ash Shaykh Rabee bin Haadi Al Madkhalee 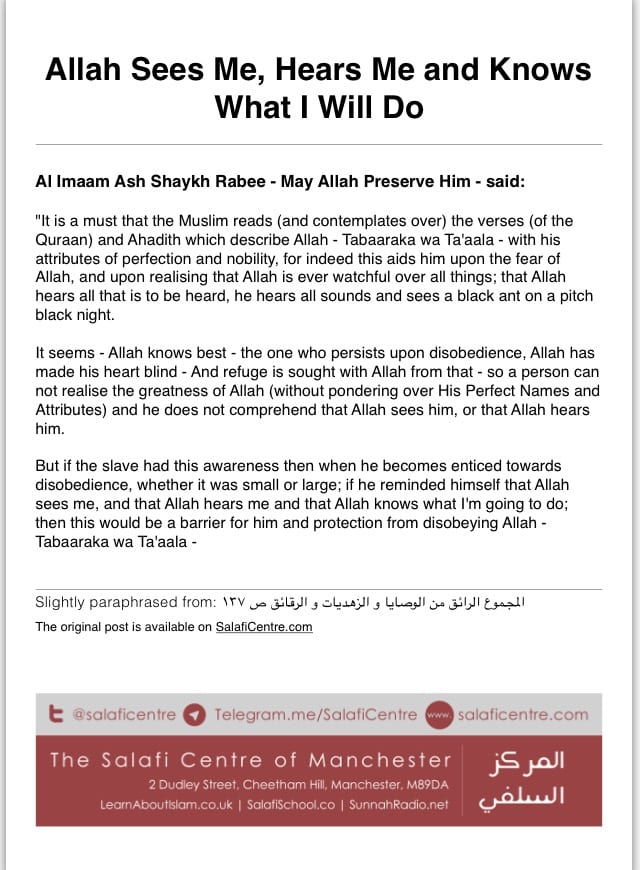 “It is a must that the Muslim reads (and contemplates over) the verses (of the Quraan) and Ahadith which describe Allah – Tabaaraka wa Ta’aala – with his attributes of perfection and nobility, for indeed this aids him upon the fear of Allah, and upon realising that Allah is ever watchful over all things; that Allah hears all that is to be heard, he hears all sounds and sees a black ant on a black rock in the pitch black of night.

It seems – Allah knows best – the one who persists upon disobedience, Allah has made his heart blind – And refuge is sought with Allah from that – so a person can not (come close to) realise the greatness of Allah (without pondering over His Perfect Names and Attributes) and he can not comprehend that Allah sees him, or that Allah hears him.

But if the slave had this awareness then when he becomes enticed towards disobedience, whether it was small or large; if he reminded himself that Allah sees me, and that Allah hears me and that Allah knows what I’m going to do; then this would be a barrier for him and protection from disobeying Allah -Tabaaraka wa Ta’aala –