Written by Abdullah Jallow on April 30, 2016. Posted in Scholars of Islam, The Salaf - Pious Predecessors. 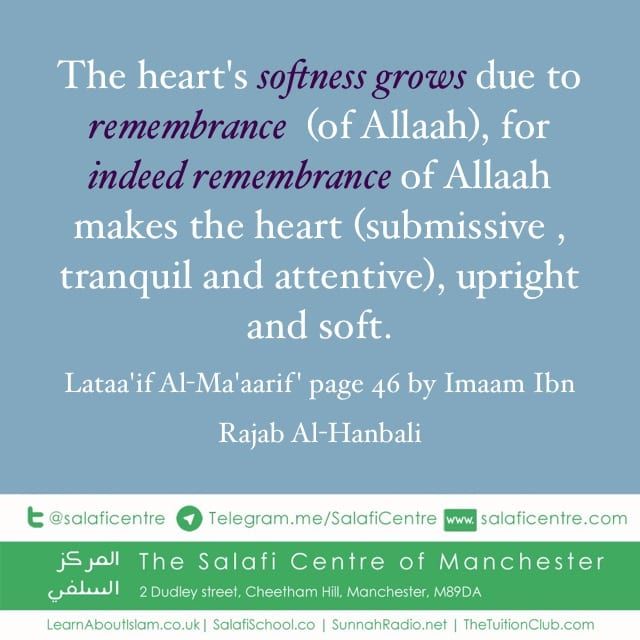 Written by Abdullah Jallow on April 30, 2016. Posted in Purification of The Soul, Qur'aan.

The heart’s softness grows due to remembrance (of Allaah), for indeed remembrance of Allaah makes the heart (submissive , tranquil and attentive), upright and soft. 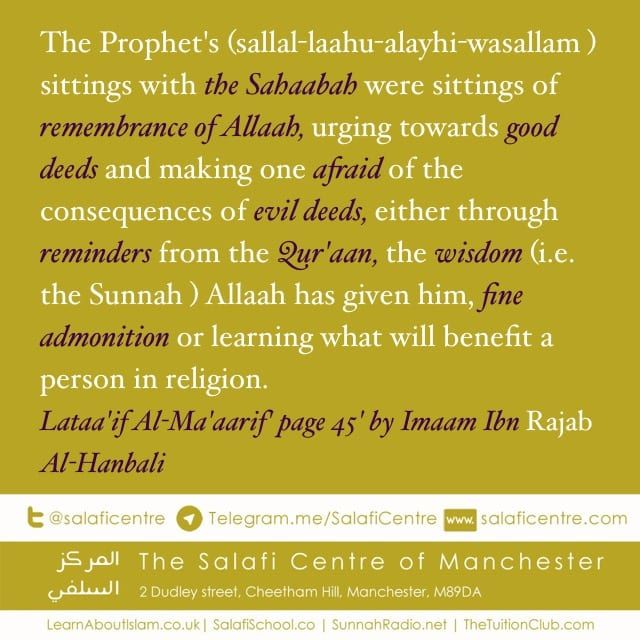 Descriptions of The Sittings of The Prophet with The Sahaabah

Written by The Salafi Centre of Manchester on April 30, 2016. Posted in Da'wah - Calling To Islam, Seeking Knowledge, The Salaf - Pious Predecessors.

The Prophet’s (sallal-laahu-alayhi-wasallam ) sittings with the Sahaabah were sittings of remembrance of Allaah, urging towards good deeds and making one afraid of the consequences of evil deeds, either through reminders from the Qur’aan, the wisdom (i.e. the Sunnah ) Allaah has given him, fine admonition or learning what will benefit a person in religion. 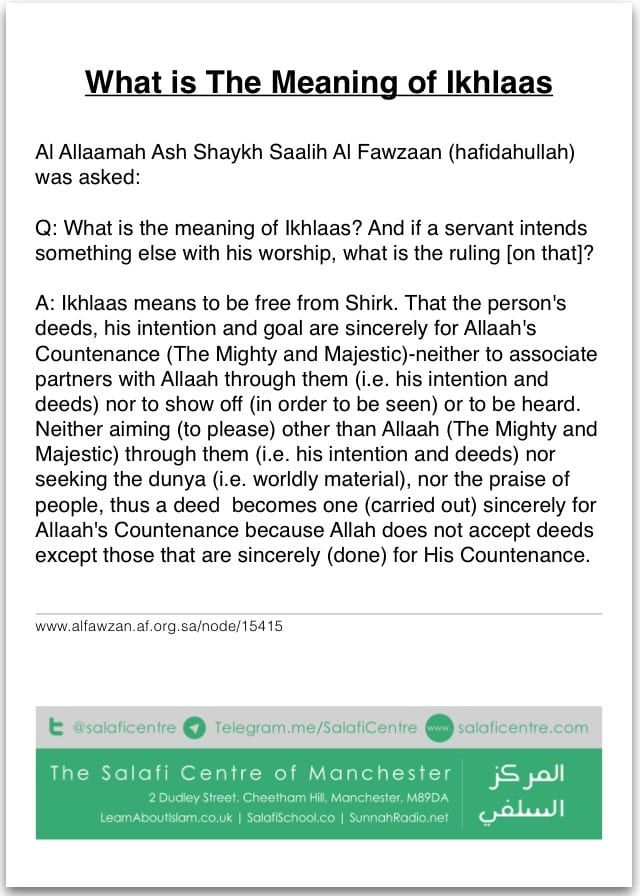 What is Ikhlaas (Sincerity) – Shaykh Fawzaan

Written by The Salafi Centre of Manchester on April 30, 2016. Posted in Aqeedah (Creed & Belief), Morals and Manners - 'Akhlaaq', Purification of The Soul, Video.

Q: What is the meaning of Ikhlaas? And if a servant intends something else with his worship, what is the ruling [on that]?

A: Ikhlaas means to be free from Shirk. That the person’s deeds, his intention and goal are sincerely for Allaah’s Countenance (The Mighty and Majestic)-neither to associate partners with Allaah through them (i.e. his intention and deeds) nor to show off (in order to be seen) or to be heard. Neither aiming (to please) other than Allaah (The Mighty and Majestic) through them (i.e. his intention and deeds) nor seeking the dunya (i.e. worldly material), nor the praise of people, thus a deed  becomes one (carried out) sincerely for Allaah’s Countenance because Allah does not accept deeds except those that are sincerely (done) for His Countenance.

Explanation of the Muslim’s Testification of Faith – Imaam Sadi

The Messenger of Allah (sallallaahu alaihi wa sallam) said: Islaam is built upon 5;

Is the knowledge, belief and adherence of the slave that there is nothing (or no-one) deserving of divinity or worship except Allah Alone, having no partner.

Therefore that which is obligated upon the slave:

Is to purify and sincerely (direct) all (affairs) of the religion to Allah [The Most High], and that the slave’s acts of worship – the apparent and the hidden – are all for (carried out for the sake of) Allah alone, and that he does not associate any partners with Him in any of the affairs of the religion.

This is the foundation of the religion of all of the messengers and their followers as Allah the Most High has said:

And We did not send any Messenger before you [O Muhammad (sallal-laahu-alayhi-wasallam)] but We revealed to him (saying): Lâ ilâha illa Ana [none has the right to be worshipped but I (Allâh)], so worship Me (Alone and none else).” [Al-Anbiyaa (25)]

And The Shahaadah that Muhammad is the Messenger of Allah:

That the Slave believes (and holds as creed) that Allah sent Muhammad to all of the humans and jinn, a bringer of glad tidings and a warner, calling them to single out Allah [in worship (Tawheed)] and to obey Him, by affirming the news/information (Allaah has made known to them),  obeying His commands and staying far away from His prohibitions. And that (the person) believes that there is no happiness and no salvation in the worldly life or hereafter, except by way of eemaan (belief) in Allaah and by obeying [the Messenger (sallallaahu alaihi wa sallam)]. And (know) that it is obligatory to put love of him before love of yourself and your children and all of the people.

And (to believe) that Allah aided him with miracles, as an indication of (the truthfulness) of his message and the complete knowledge Allaah gave him and (his) high moral character, and that his religion is comprised of guidance, mercy and truth; worldly and religious benefits.

And the greatest sign is this Great Quraan, due to the truth it contains, the information about (various affairs of the worldly life and the afterlife), commands and prohibitions. 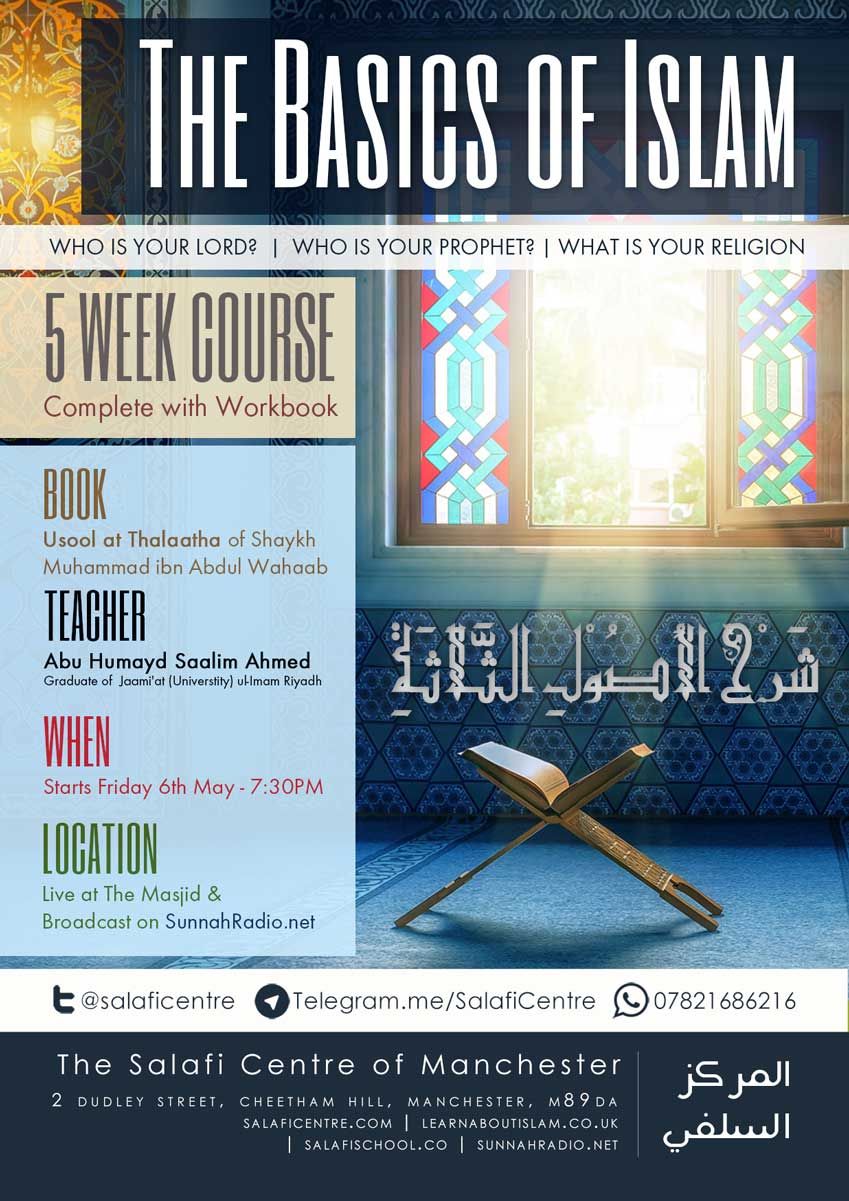 Written by The Salafi Centre of Manchester on April 28, 2016. Posted in Featured, Lessons, Regular Lessons, Uncategorized.

Starts Next Friday & Every Friday for 5 weeks. 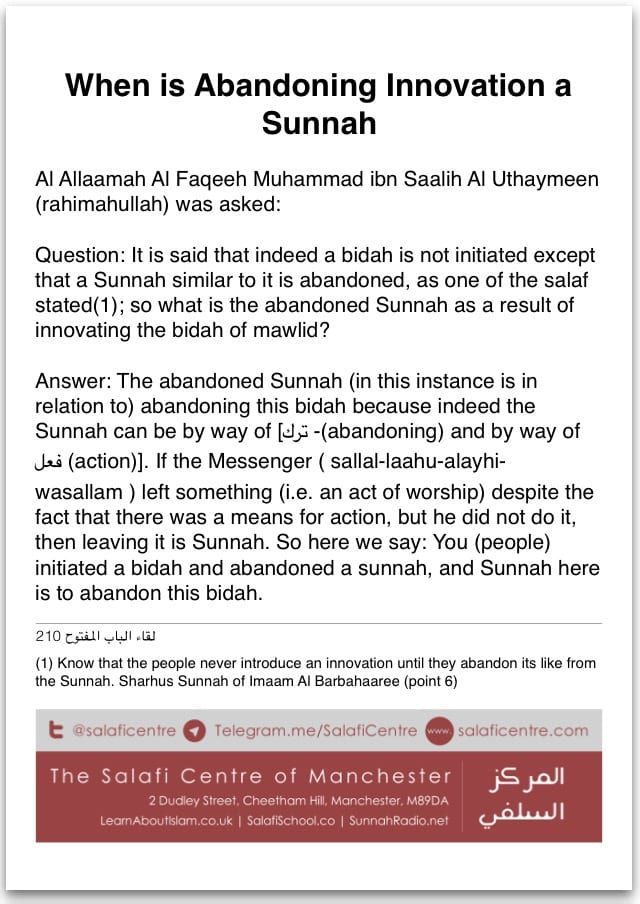 When is Abandoning Innovation a Sunnah? Ibn Uthaymeen

Question: It is said that indeed a bidah is not initiated except that a Sunnah similar to it is abandoned, as one of the salaf stated(1); so what is the abandoned Sunnah as a result of innovating the bidah of mawlid?

Answer: The abandoned Sunnah (in this instance is in relation to) abandoning this bidah because indeed the Sunnah can be by way of [ترك -(abandoning) and by way of فعل (action)]. If the Messenger ( sallal-laahu-alayhi-wasallam ) left something (i.e. an act of worship) despite the fact that there was a means for action, but he did not do it, then leaving it is Sunnah. So here we say: You (people) initiated a bidah and abandoned a sunnah, and Sunnah here is to abandon this bidah.

(1) Know that the people never introduce an innovation until they abandon its like from the Sunnah. 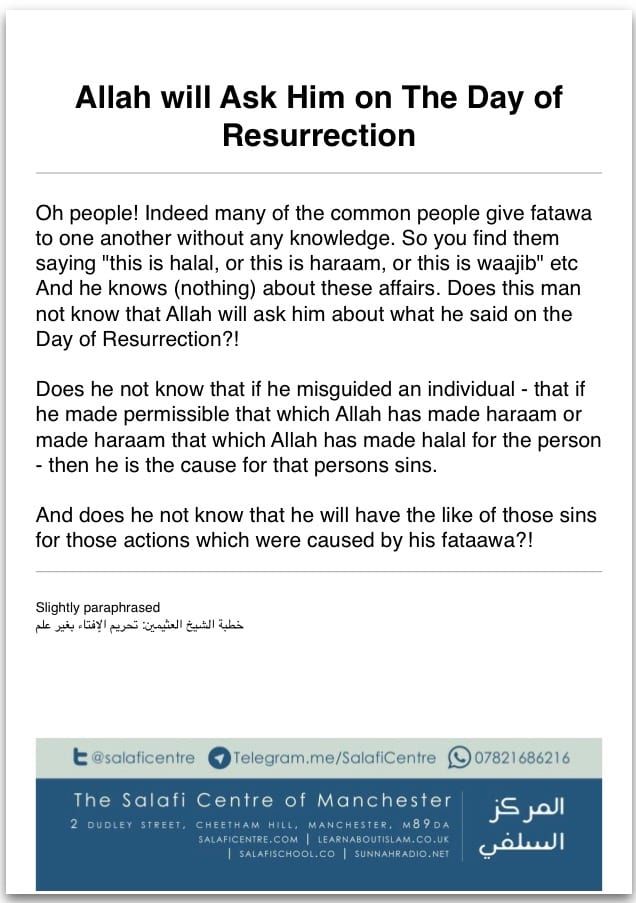 Allah will Ask Him on The Day of Resurrection – Shaykh Uthaymeen

Written by The Salafi Centre of Manchester on April 25, 2016. Posted in Articles, Fatawa-Rulings, Islamic Jurisprudence - 'Fiqh'.

Oh people! Indeed many of the common people give fatawa to one another without any knowledge. So you find them saying “this is halal, or this is haraam, or this is waajib” etc And he knows (nothing) about these affairs. Does this man not know that Allah will ask him about what he said on the Day of Resurrection?!

And does he not know that he will have the like of those sins for those actions which were caused by his fataawa?!

Written by The Salafi Centre of Manchester on April 25, 2016. Posted in Articles, Family & Women, Morals and Manners - 'Akhlaaq', Purification of The Soul.

Asmaa Bint Yazeed (radiyallaahu-anhaa) reported that she was with the Messenger of Allaah (sallal-laahu-alayhi-wasallam), whilst men and women were sitting; so he [the Messenger (sallal-laahu-alayhi-wsallam)] said: ‘’Would a man say what he did with his wife (i.e. sexual relations) and would a woman inform (others) what she did with her husband?” The people remained silent (i.e. they did not respond to the Messenger); So I (Asmaa) said: “Yes, by Allaah! O Messenger of Allaah they (i.e. women) do that and they (i.e. men) do that.” He (sallal-laahu-alayhi-wasallam) said: “Do not do so; for indeed it is like a male devil meets a female devil in the road and have sex with her whilst the people are looking.” [Shaikh Albaani stated in Aadaab Az-Zafaaf page 144 footnote number 1 that this hadeeth was reported by Abu Dawood, 1/339 and it is Saheeh or the least Hasan]

Foolish Hizbis Refer To Some Deviated Young Caller As ‘Shaikh’

Written by on April 24, 2016. Posted in Deviated Callers & Individuals, Scholars of Islam.

Shaikh Firkoos (may Allaah preserve him) was asked about applying the term Shaikh’ to everyone who enters into the field of teaching, dawah etc

The Shaikh stated that a ‘Shaikh’ is everyone who has exceeded the age of 50 –above middle age and under old age….. As for a Shaikh in the affairs of knowledge, it is applied to everyone who is advanced in age and has gained a lot of experience in various sciences and is well acquainted with it. He is able to refute Shubuhaat and establish evidences, which manifests in his ability in affairs of knowledge, and the guidance and cultivation he gives the people. He is far removed from following desires and desiring what the people possess. So it is not allowed for a beginner student to be given this title in affairs of knowledge even if he has acquired some of the sciences or is a graduate from a university, or has memorized some of Sunan of the Prophet, or has certificates, recommendations etc listen to speech here: http://safeshare.tv/v/nypmxZZVDkA

So where are those foolish Hizbis who refer to some deviated youngster as ‘Shaikh’ when it is the case that neither has that deviant reached the age of 50 nor has any scholar referred to him as such. As for their deviated elders, then they are merely Shuyookh in age and not in knowledge because they are people of deviation and desires. We ask Allaah to protect us from carelessness and foolishness. Aameen