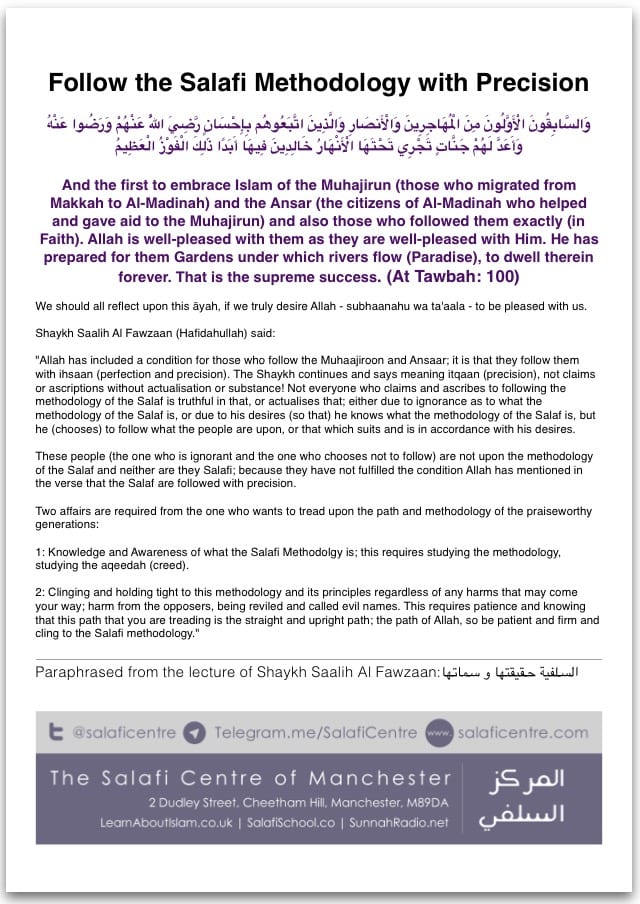 And the first to embrace Islam of the Muhajirun (those who migrated from Makkah to Al-Madinah) and the Ansar (the citizens of Al-Madinah who helped and gave aid to the Muhajirun) and also those who followed them exactly (in Faith). Allah is well-pleased with them as they are well-pleased with Him. He has prepared for them Gardens under which rivers flow (Paradise), to dwell therein forever. That is the supreme success. (At Tawbah: 100)

We should all reflect upon this āyah, if we truly desire Allah – subhaanahu wa ta’aala – to be pleased with us.

These people (the one who is ignorant and the one who chooses not to follow) are not upon the methodology of the Salaf and neither are they Salafi; because they have not fulfilled the condition Allah has mentioned in the verse that the Salaf are followed with precision.

Two affairs are required from the one who wants to tread upon the path and methodology of the praiseworthy generations:

1: Knowledge and awareness of what the Salafi Methodolgy is; this requires studying the Methodology, studying the Aqeedah (creed).

2: Clinging and holding tight to this Methodology and its principles regardless of any harms that may come your way; harm from the opposers, being reviled and called evil names.

This requires patience and knowing that this path that you are treading is the straight and upright path; the path of Allah, so be patient and firm and cling to the Salafi Methodology.”

Paraphrased from the lecture of Shaykh Saalih Al Fawzaan: