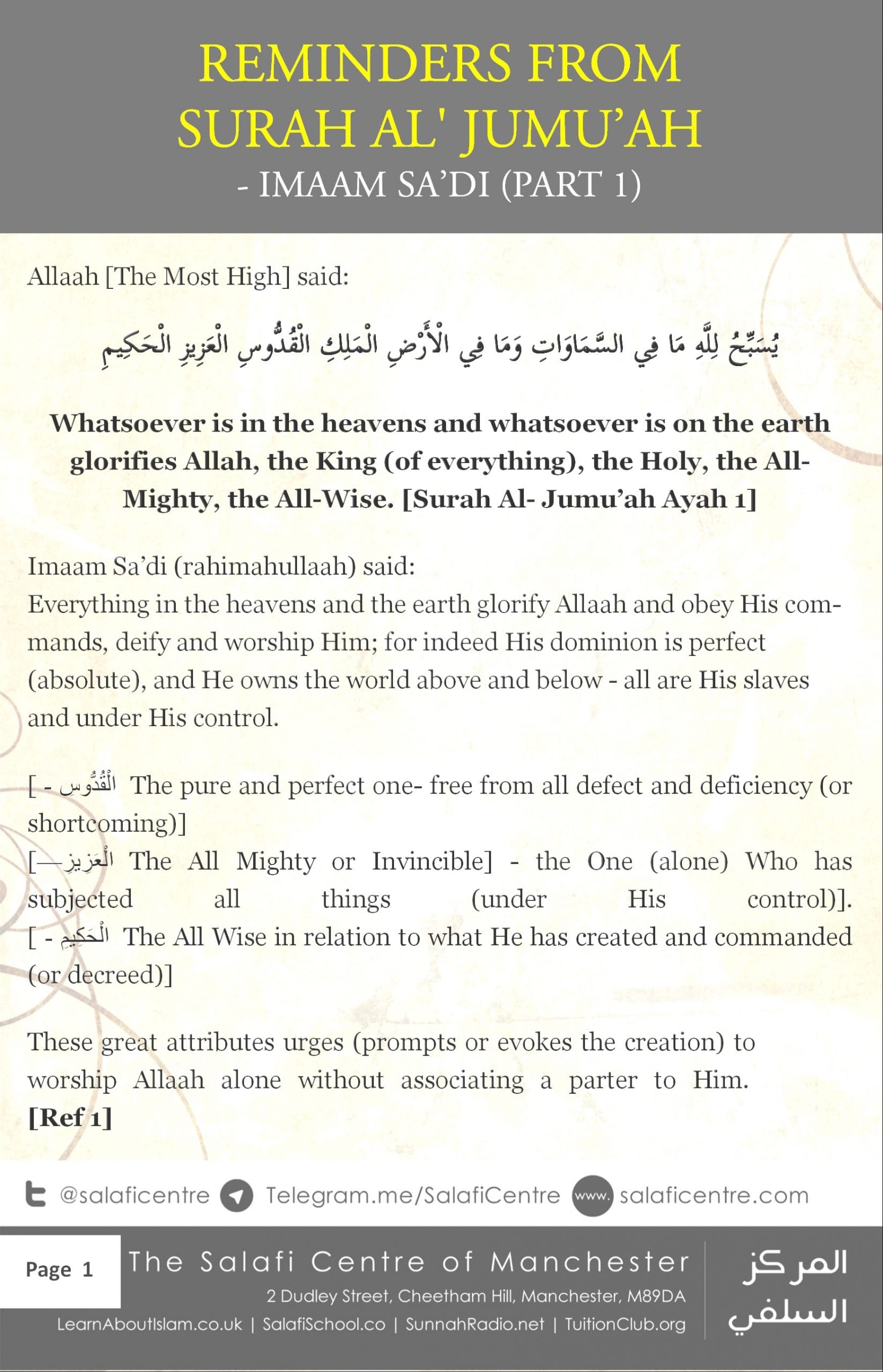 Whatsoever is in the heavens and whatsoever is on the earth glorifies Allah, the King (of everything), the Holy, the All-Mighty, the All-Wise. [Surah Al- Jumu’ah Ayah 1]

Everything in the heavens and the earth glorify Allaah and obey His commands, deify and worship Him; for indeed His dominion is perfect (absolute), and He owns the world above and below – all are His slaves and under His control.

[الْعَزِيزِ -The All Mighty or Invincible] – the One (alone) Who has subjected all things (under His control)].

These great attributes urges (prompts or evokes the creation) to worship Allaah alone without associating a parter to Him. [Ref 1]

The seven heavens and the earth and all that is therein, glorify Him and there is not a thing but glorifies His Praise. [Ref 2] But you understand not their glorification. [Surah Al-Israa Ayah 44]

I heard Allaah’s Messenger (sallal-laahu-alayhi-wasallam) saying, “An ant bit a Prophet amongst the Prophets, and he ordered that the place of the ants be burnt. So, Allaah inspired to him, ‘It is because one ant bit you that you burnt a nation amongst the nations that glorify Allaah?” [Ref  3]

The Prophet (sallal-laahu-alayhi-wasallam) used to stand by a tree or a datepalm (trunk) on Friday. Then an Ansari woman or a man said, “O Allaah’s Messenger! Shall we make a pulpit for you?’’ He replied, “If you wish’’. So they made a pulpit for him and when it was Friday, he proceeded towards the pulpit [for delivering the khutbah (religious talk)]. The date-palm cried like a child! The Prophet -sallal-laahu-alayhi-wasallam- descended (from the pulpit) and embraced it while it continued moaning like a child being quietened. The Propjet (sallal-laahu-alayhi-wasallam) said, ‘’It was crying for (missing) what it used to hear of religious knowledge given near it’’. [Ref 4]

Part 1 of the Series. To be continued insha’Allah

[R3: Source: Hadeeth reported by Bukhari 4/3019 & quoted in ‘Interpretation of the meanings of the noble Qur’aan in the English language’ part 4’ by Dr Muhammad Taqi-ud-Din Al-Hilali & Dr Muhammad Muhsin Khan]

[Ref4: Hadeeth reported by Bukhaari 4/3584 & quoted in ‘Interpretation of the meanings of the noble Qur’aan in the English language’ part 4’ by Dr Muhammad Taqi-ud-Din Al-Hilali & Dr Muhammad Muhsin Khan]