What Is Said to People Who Innovate – Shaykh Ubayd Al Jaabiree

by The Salafi Centre of Manchester | May 9, 2016 | Aqeedah (Creed & Belief), Articles, Innovations In Islam (Bidah), Refutations 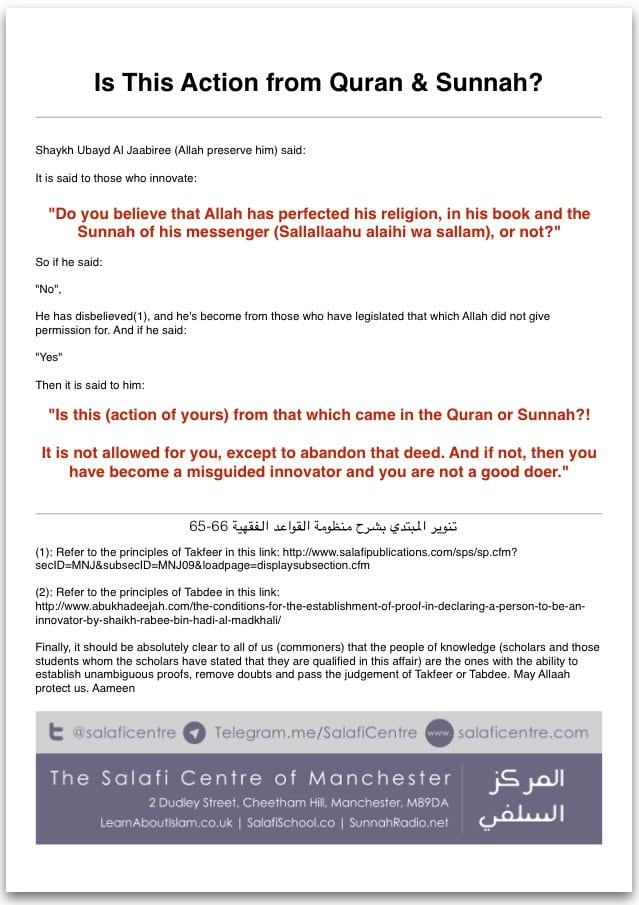 It is said to those who innovate:

“Do you believe that Allah has perfected his religion, in his book and the Sunnah of his messenger (Sallallaahu alaihi wa sallam), or not?”

So if he said:

He has disbelieved, and he’s become from those who have legislated that which Allah did not give permission for. [Ref 1- see footnote 1 at the end of this article]

And if he said:

Then it is said to him:

“Is this (action of yours) from that which came in the Quran or Sunnah?!

It is not allowed for you, except to abandon that deed. And if not, then you have become a misguided innovator and you are not a good doer.” [Ref 2- see footnote 2 at the end of this article]

Ref 1- footnote 1: Refer to the principles of Takfeer in this link: http://www.salafipublications.com/sps/sp.cfm?secID=MNJ&subsecID=MNJ09&loadpage=displaysubsection.cfm

Ref 2- footnote 2: Refer to the principles of Tabdee in this link:

Finally, it should be absolutely clear to all of us (commoners) that the people of knowledge (scholars and those students whom the scholars have stated that they are qualified in this affair) are the ones with the ability to establish unambiguous proofs, remove doubts and pass the judgement of Takfeer or Tabdee. May Allaah protect us. Aameen