[Arabic Audio]: An Explanation of Imaam Ibn Rajab’s Treatise Titled: ‘The Virtue of the Knowledge of Salaf Over the knowledge of the Khalaf’ – By Shaikh Abdullaah Al-Bukhaari

Written by on July 31, 2016. Posted in Deviated Groups, Sects and Parties, Innovations In Islam (Bidah), Khawaarij, Scholars of Islam.

Imaam Muhammad Ibn Saaleh Uthaymeen (rahimahullaah) said, “There is no khurooj with the sword except that it is preceded by Khurooj with the tongue”. [Ref 1]

Shaikh Saaleh Al-Fawzan (may Allaah preserve him) was asked:

The one (i.e. Dhul Khuwaysirah) who said to the Messenger (sallal-laahu-alayhi-wasallam) ‘’be just’’ is not a just person. This was the beginning of the khawaarij in view of the fact that he accused him of oppression.  And it is not a condition that the khawaarij have to carry weapons, rather he (the person) is from the khawaarij and upon their school of thought if he believes in declaring Muslims disbelievers due to major sins (they commit). If he incites (the people) against the one in charge of the affairs through sermons and writing, (then) this is the school of thought of the khawaarij even if he does not carry weapons. 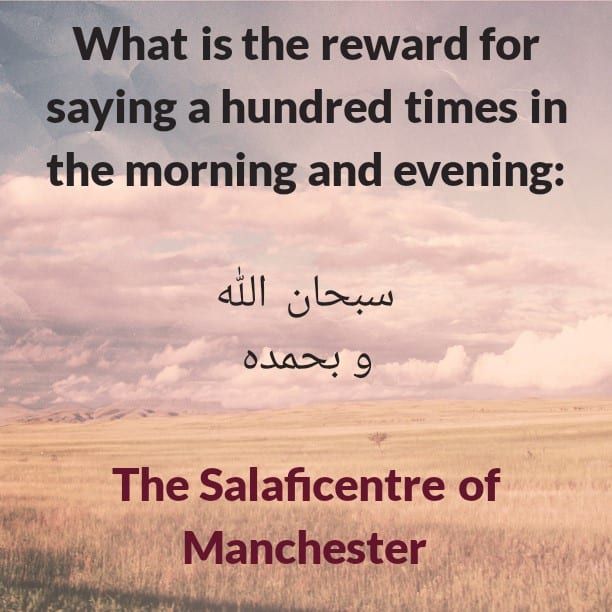 What is The Reward for saying [سُبْحَانَ اللّهِ وَبِحَمْدِهِ ] a 100 times in the Morning and Evening?!

Written by The Salafi Centre of Manchester on July 30, 2016. Posted in Must Read, Purification of The Soul, Worship - 'Ibaadah'.

The Messenger of Allaah (sallal-laahu-alayhi-wasallam) said:

Whoever says [سُبْحَانَ اللّهِ وَبِحَمْدِهِ ] a hundred times when he reaches the morning and evening, none will come on the Day of Judgement with anything better than what he comes with, except someone who has said the same as he said or more. [Sahih Muslim 2692]

Written by The Salafi Centre of Manchester on July 30, 2016. Posted in Scholars of Islam, Seeking Knowledge.

A Virtue of The Witr Prayer

Written by The Salafi Centre of Manchester on July 27, 2016. Posted in Fasting, Salaah - Prayer, Worship - 'Ibaadah'.

It was narrated from Abu Hurairah (radiyallaahu-anhu) who said: “My Khalil [close friend – i.e. the Messenger of Allaah (Sallal-laahu-alayhi-wasallam)] advised me with three (affairs and) I will not leave them until I die: “To fast three days every month. To offer the Duhaa prayer and to pray the Witr prayer before sleeping”. [Bukhari 1124]

A Verse That Comprises All That Is Good For The People

Written by The Salafi Centre of Manchester on July 27, 2016. Posted in Brotherhood, Methodology - 'Manhaj', Morals and Manners - 'Akhlaaq', Pearls of Wisdom, Purification of The Soul, Qur'aan, Worship - 'Ibaadah'.

Written by The Salafi Centre of Manchester on July 26, 2016. Posted in Morals and Manners - 'Akhlaaq', Scholars of Islam, The Salaf - Pious Predecessors.

[1] What is Salafiyyah? By Shaikh Abdullaah Al-Bukhaari (may Allaah preserve him)