A Command to Perform the Salaah and Spend in Charity, Before The Day In Which There Will Neither Be Mutual Bargaining Nor Befriending! 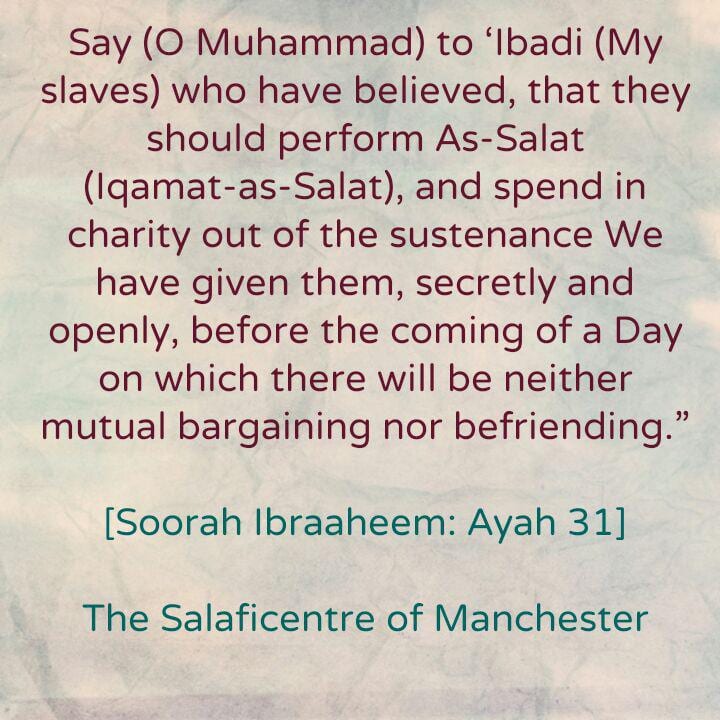 Say (O Muhammad) to ‘Ibadi (My slaves) who have believed, that they should perform As-Salat (Iqamat-as-Salat), and spend in charity out of the sustenance We have given them, secretly and openly, before the coming of a Day on which there will be neither mutual bargaining nor befriending.” [Soorah Ibraaheem: Ayah 31]

That is: Say to My believing slaves whilst commanding them with that which contains the greatest (affair of) well-being for them, that they should seize this opportunity lest they are no longer able to get hold of it; [يُقِيمُوا الصَّلَاةَ  – That they should perform the prayer] outwardly (i.e. with all its pillars, obligations etc… as taught by the Messenger) and inwardly (i.e. with awareness, concentration, humility, tranquillity in their hearts etc.)

[وَيُنْفِقُوا مِمَّا رَزَقْنَاهُمْ – And spend in charity out of the sustenance We have given them]; That is: From the blessings I have bestowed upon them, whether it is a lot or little. [سِرًّا وَعَلَانِيَةً – Secretly and openly]- this includes obligatory spending such as Zakah, (also) the spending that is obligatory upon a person and recommended spending, such as optional charity and what is similar to it.

[مِنْ قَبْلِ أَنْ يَأْتِيَ يَوْمٌ لَا بَيْعٌ فِيهِ وَلَا خِلَالٌ – Before the coming of a Day on which there will be neither mutual bargaining nor befriending]; That is: (A Day on which) nothing will benefit a person nor will there be any means to reaching what has elapsed – neither through buying nor selling, and neither through an intimate friend nor a friend because every person will be sufficed with his own affairs.

Therefore, a slave (i.e. servant of Allaah) should send forth (good deeds) for himself and look to what he has sent forth for the morrow. He should examine his deeds and take himself to account before the great Reckoning (i.e. Day of Judgement).