Our Salaf and Kind Treatment towards Animals 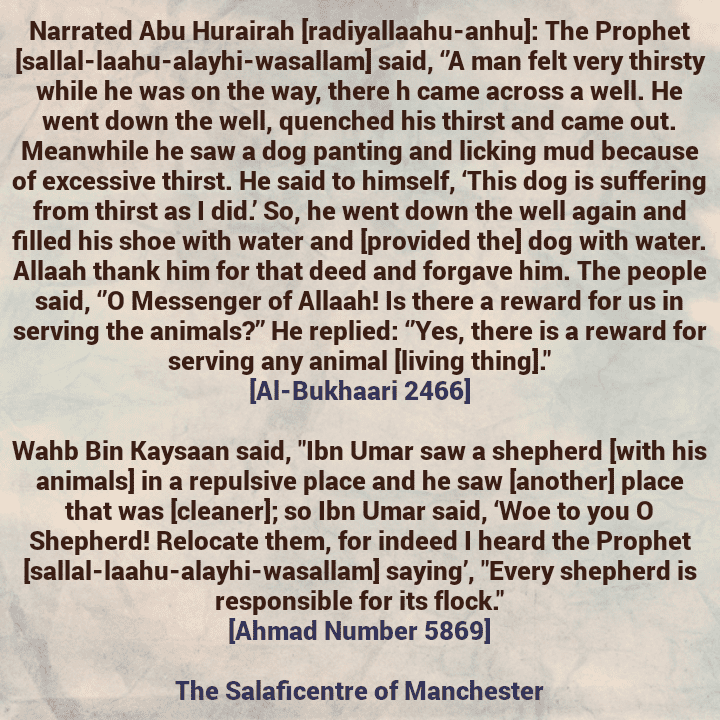 Narrated Abu Hurairah (radiyallaahu-anhu): The Prophet (sallal-laahu-alayhi-wasallam) said, ‘’A man felt very thirsty while he was on the way, there h came across a well. He went down the well, quenched his thirst and came out. Meanwhile he saw a dog panting and licking mud because of excessive thirst. He said to himself, ‘This dog is suffering from thirst as I did.’ So, he went down the well again and filled his shoe with water and (provided the) dog with water. Allaah thank him for that deed and forgave him. The people said, ‘’O Messenger of Allaah! Is there a reward for us in serving the animals?’’ He replied: ‘’Yes, there is a reward for serving any animal (living thing). [Ref 1]

Wahb Bin Kaysaan said, ”Ibn Umar saw a shepherd (with his animals) in a repulsive place and he saw (another) place that was (cleaner); so Ibn Umar said, ‘Woe to you O Shepherd! Relocate them, for indeed I heard the Prophet (sallal-laahu-alayhi-wasallam) saying’, ”Every shepherd is responsible for its flock.”[Ref 2]

[Ref 1: Reported by Imaam al-Bukhaari (rahimahullaah) in [Kitaab Al-Mazaalim -Book of Oppressions’ Hadeeth Number 2466 under Chapter Heading: The Digging of wells on the ways (is permissible) if they do not cause trouble to the people] and also in [Kitaab Al-Musaaqaati- ‘The Book of Watering’, Hadeeth Number 2363 under chapter Heading: The Superiority of providing water (to those who need it)]