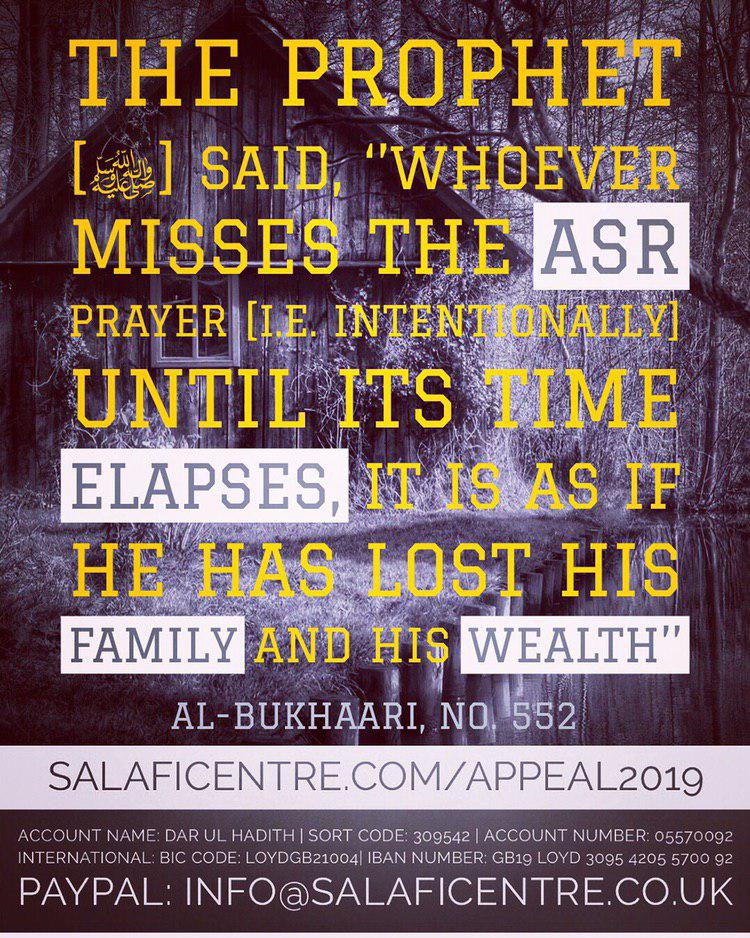 The Prophet [sallal-laahu-alayhi-wasallam] said, ‘’Whoever misses the Asr prayer [i.e. intentionally] until its time elapses, it is as if he has lost his family and his wealth’’. [Ref 1]

Shaikh Muhammad Baazmool [may Allaah preserve him] said: Why is the Asr prayer specifically mentioned and not the other prayers? The scholars say that perhaps the wisdom behind this is because the time of Asr is when the people are very busy in trade and roaming about in the markets. At present -سبحان الله – the time of Asr prayer is the hardest time for those engaged in professional occupations and the workers, for they return and relax in their houses and do not wake up until the time of Asr prayer elapses, so they are lackadaisical in this affair..

The Asr Prayer is great in the Sight of Allaah.  Allaah (The Blessed and Exalted) said:

The scholars say that the meaning of Salaatul Wustaa is the Asr prayer. It has been reported from the Messenger [sallal-laahu-alayhi-wasallam] that on the day of Al Ahzaab – the day of the battle of Al Khandaq when the Arab tribes gathered to fight the Muslims – he said: ”O Allaah! Fill their [i.e. the infidels] houses and graves with fire, as they busied us so much that we did not perform the middle Salat [(prayer)- i.e. Asr prayer] till the sun had set.’’ [Ref 3]

Allaah [Glorified Be He and Free is He from all imperfections] said about the Fajr prayer:

The scholars say that the reason behind this is because it (i.e. Fajr time) is the time in which the angels of the night and the angels of the daytime get together and likewise at the time of Asr Salaah, for they are two time periods in which the angels change shifts in order to accompany the children of Aadam. Therefore, a Muslim should be eager to perform the Asr prayer at its correct time and if he is preoccupied (i.e. without a valid shariah excuse) until its time elapses, then it is as if he has lost all his family and wealth. [The End]