by The Salafi Centre of Manchester | Aug 6, 2016 | Articles, Morals and Manners - 'Akhlaaq', Purification of The Soul, Salaah - Prayer, Scholars of Islam, Worship - 'Ibaadah' 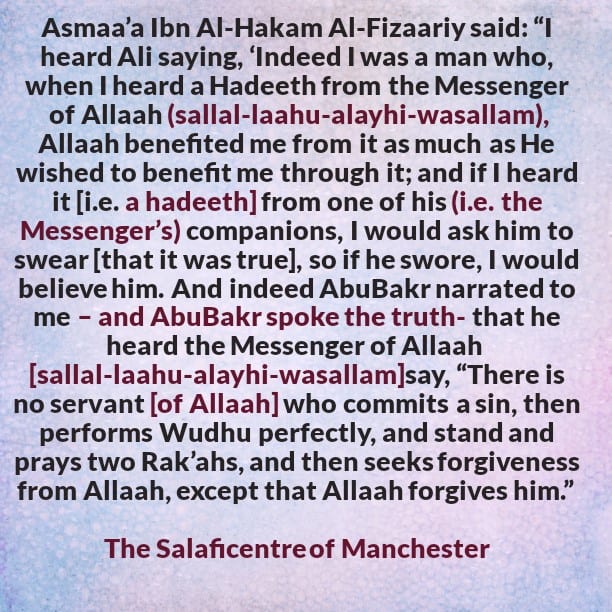 It is incumbent upon a servant (of Allaah) that he is eager to fear Allaah (The Most High); pays close attention and be very attentive to (Allaah’s commands and prohibitions) and not to fall into disobedience. And if he commits sin, he should proceed-without delay- towards repentance, and turns repentantly to Allaah with complete submission. And indeed the Messenger (sallal-laahu-alayhi-wasallam) legislated this Salaah [for a person when he performs the act of] repentance.

Asmaa’a Ibn Al-Hakam Al-Fizaariy said: “I heard Ali saying, ‘Indeed I was a man who, when I heard a Hadeeth from the Messenger of Allaah (sallal-laahu-alayhi-wasallam), Allaah benefited me from it as much as He wished to benefit me through it; and if I heard it (i.e. a hadeeth) from one of his (i.e. the Messenger’s) companions, I would ask him to swear (that it was true), so if he swore, I would believe him. And indeed AbuBakr narrated to me – and AbuBakr spoke the truth- that he heard the Messenger of Allaah  (sallal-laahu-alayhi-wasallam) say, “There is no servant (of Allaah) who commits a sin, then performs Wudhu perfectly, and stand and prays two Rak’ahs, and then seeks forgiveness from Allaah, except that Allaah forgives him.” Then he recited this Ayah:

”And those who, when they have committed Fahishah (illegal sexual intercourse etc.) or wronged themselves with evil, remember Allah and ask forgiveness for their sins; – and none can forgive sins but Allah – And do not persist in what (wrong) they have done, while they know”. [3:135] [Ref A]