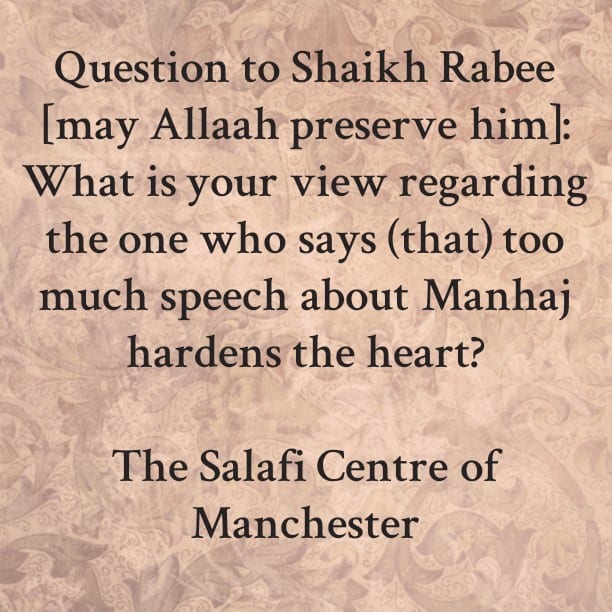 Question to Shaikh Rabee [may Allaah preserve him]: What is your view regarding the one who says [that] too much speech about Manhaj hardens the heart?

Answer: The Shaikh [may Allaah preserve him] firstly questions the deviated view presented in the question -with exclamation marks, in order to make the listener realise its falsity and acknowledge the opposite of it; then he he stated as follows:

‘’Too much speech about sound Manhaj and studying it hardens the heart; but calling to fictitious [beliefs, deeds, ideas, views etc], bidah, misguidance and the ideas of the khawaarij softens the hearts!!!  The call to Manhaj – the call to the Book of Allaah and the Sunnah of the Messenger [sallal-laahu-alayhi-wasallam], and what the Book of Allaah and the Sunnah of Messenger contains pertaining to creed, acts of worship, deeds and rectification of the Manhaj- is a great affair which must be [established]. The affairs of misguidance [innovated in this] Manhaj are numerous and regardless how much a person speaks [about Manhaj], his efforts are little in comparison to what the affair requires. At present we speak about Manhaj, but has it reached all the Muslims?!! But speech based on the path of the Tableeghees, the Ikhwaanees, the people of misguidance, the people of bidah, the [carriers] of fictitious views, deviated views, [deviated] political views softens the heart! Is this a correct statement? This is the speech of the foolish ones – those who are fed up with the true Islamic methodology, so they utter the likes of this false speech [which] hinders [people] from the path of Allaah”.