by The Salafi Centre of Manchester | Oct 1, 2016 | Brotherhood, Morals and Manners - 'Akhlaaq', Purification of The Soul, Worship - 'Ibaadah' 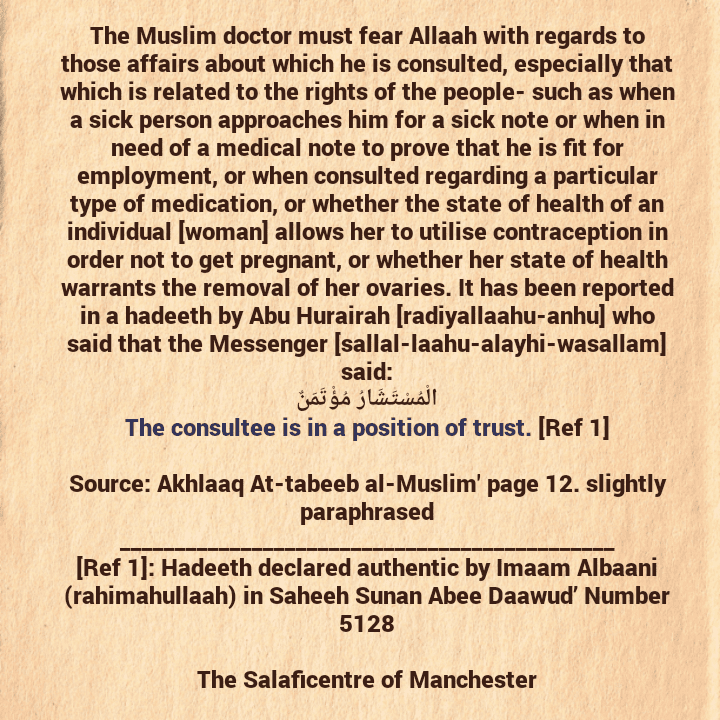 The Muslim doctor must fear Allaah with regards to those affairs about which he is consulted, especially that which is related to the rights of the people- such as when a sick person approaches him for a sick note or when in need of a medical note to prove that he is fit for employment, or when consulted regarding a particular type of medication, or whether the state of health of an individual (woman) allows her to utilise contraception in order not to get pregnant, or whether her state of health warrants the removal of her ovaries. It has been reported in a hadeeth by Abu Hurairah (radiyallaahu-anhu) who said that the Messenger (sallal-laahu-alayhi-wasallam) said: [الْمُسْتَشَارُ مُؤْتَمَنٌ – The consultee is in a position of trust] [Ref 1] [End of quote. slightly paraphrased]

Few Reminders From The Hadeeth: [الْمُسْتَشَارُ مُؤْتَمَنٌ   – The consultee is in a position of trust]

[المستشار -The Consultee]: He is the one whose opinion is sought after regarding an affair of Maslahah (i.e. an affair that will bring about benefit and repel harm). He is in a position of trust with regards to what he is asked and it is not permissible for him to deceive the one who consults him, by concealing the affair that would bring about benefit. [Ref 2] [End of quote]

This hadeeth is an evidence, showing that the consultee has to (advise) with the course of action and opinion -in relation to the consultation – that which he would do for himself. And it is not permissible that he directs his Muslim brother to something he would not be pleased with for himself. [Ref 3] [End of quote]