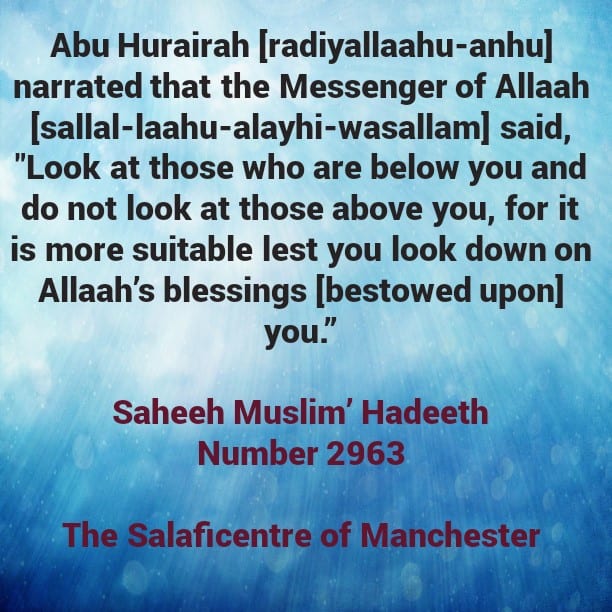 Abu Hurairah (radiyallaahu-anhu) narrated that the Messenger of Allaah (sallal-laahu-alayhi-wasallam) said, ”Look at those who are below you and do not look at those above you, for it is more suitable lest you look down on Allaah’s blessings (bestowed upon) you.” [Saheeh Muslim’ Hadeeth Number 2963]

A person should neither be covetous of this worldly life nor anxious due to what afflicts him (or her), rather he (or she) should exercise patience and hope for (Allaah’s reward due to exercising patience) – whether he (or she) is poor, sick or other than that. The worldly life is a place of trial and test, so one should not become anxious due to calamities and trials. And what makes this affair easier for a person is the guidance given by the Prophet (sallal-laahu-alayhi-wasallam) in this hadeeth (as follows): ”Look at those who are below you and do not look at those above you, for it is more suitable lest you look down on Allaah’s blessings (bestowed upon) you”.

A poor person should look at the one who is poorer and should not look at a wealthier (person), for if Allaah willed He would have placed you in the same situation as that poor person who has nothing. You have something – you have your daily nourishment; but that one poorer than you has nothing – he does not even have his daily nourishment. You are in a better situation, so praise Allaah for this and do not look at the wealthier people because that will lead you to harbour anger against Allaah and being displeased with His divine Will, and then you (will or might) say, ‘’Why can I not be like such and such person; why am not like the wealthy people?’’ This is the meaning of looking down on the blessing you have. However, if you look at the person below you, it will make you thankful because your situation is better than that of many people. Therefore, the one in good health should look at the sick person and then praises Allaah for granting him (or her) good health. The one who is sick should look at the one who is sicker than him (or her) and then praises Allaah for being less sick than the person who is sicker than him (or her). This (hadeeth embodies) a great principle. Therefore, ‘look to the one below you’ in (relation) to wealth, health and in other affairs.