What to Say When You Hear People Praising You or When Informed About It? [PDF 3 pages]

by The Salafi Centre of Manchester | Oct 4, 2016 | Purification of The Soul, The Salaf - Pious Predecessors, Worship - 'Ibaadah' 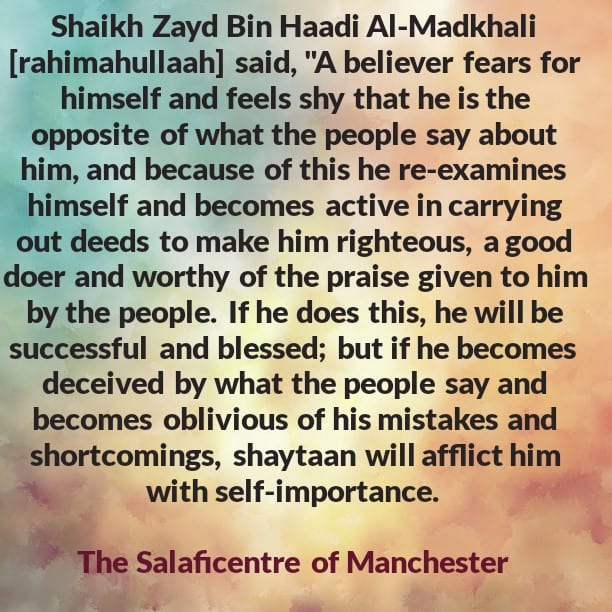 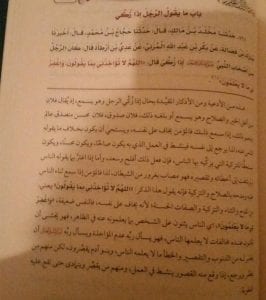 A man among the companions of the Prophet [sallal-laahu-alayhi-wasallam] used to say when he was praised: O Allaah! Do not take me to account for what they say and forgive me for what they do not know [about me].

This is from the invocations and supplications [which a person supplicates with], specifically when praised and he hears it; for example, when it is said, ‘’Fulaan [i.e. such and such person] upright and righteous’’, so he hears what was said about him, or such praise reached him [from others], or it is said, ‘’Fulaan [i.e. such and such] is very truthful, such and such is a good doer, a charitable person, a scholar and so on’’. If he hears this, then a believer fears for himself and feels shy that he is the opposite of what the people say about him, and because of this he re-examines himself and becomes active in carrying out deeds to make him righteous- a good doer and worthy of the praise given to him by the people.

If he does this, he will be successful and blessed; but if he becomes deceived by what the people say and becomes oblivious of his mistakes and shortcomings, shaytaan will afflict him with self-importance. Due to this, when a believer hears the people commending and praising him with [attributes] of righteousness, he utters this dhikr: ‘’[O Allaah! Do not take me to account for what they say]’’ – Meaning: ‘’Do not hold me account due to this praise and commendation, and the good characteristics [mentioned about me].’’ That is because he fears for himself.

The soul of a person is  weak, so he says, ‘’[And forgive me for what they do not know (about me)]’’- Meaning: ‘’The people commend a person based on what they know about him outwardly, so the person fears that he has Mukhaalafaat [i.e. deeds that are in opposition to the commands and prohibitions in the Sharee’ah] which are unknown to the people, so he asks his Lord [The Blessed and Exalted] not to hold him to account and to forgive those sins of his, shortcomings and mistakes which are unknown to the people. The children of Adam are deficient, but there are those amongst them who fall short and return to [repentance or rectification] and are active again in the performance of good deeds after falling short. And amongst them are those who fall short and persist upon (sin) until punishment comes upon them.