They Might Laugh at You and Say, ‘’You People Live Under One Rulership’’ Or ”Under a Dictatorship’’ – Shaikh Muhammad Amaan Al-Jaami Responds to This Claim 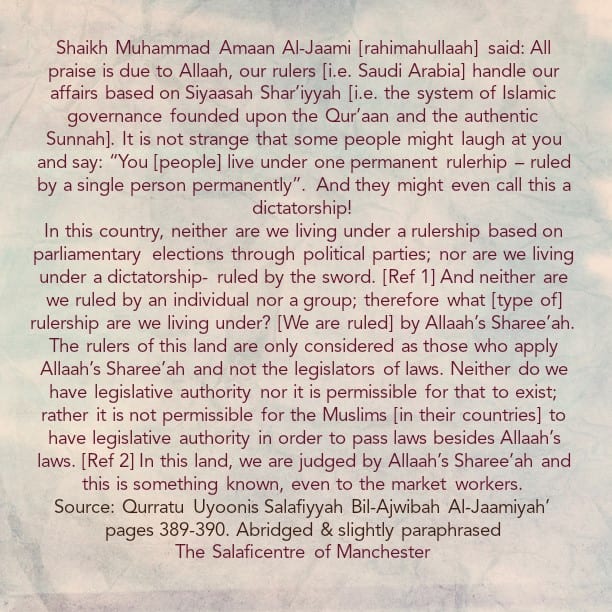 Shaikh Muhammad Amaan Al-Jaami [rahimahullaah] said: All praise is due to Allaah, our rulers [i.e. Saudi Arabia] handle our affairs based on Siyaasah Shar’iyyah [i.e. the system of Islamic governance founded upon the Qur’aan and the authentic Sunnah]. It is not strange that some people might laugh at you and say: “You [people] live under one permanent rulerhip – ruled by a single person permanently”. And they might even call this a dictatorship!

In this country, neither are we living under a rulership based on parliamentary elections through political parties; nor are we living under a dictatorship- ruled by the sword. [Ref 1] And neither are we ruled by an individual nor a group; therefore what (type of) rulership are we living under? [We are ruled] by Allaah’s Sharee’ah. The rulers of this land are only considered as those who apply Allaah’s Sharee’ah and not the legislators of laws. Neither do we have legislative authority nor it is permissible for that to exist; rather it is not permissible for the Muslims [in their countries] to have legislative authority in order to pass laws besides Allaah’s laws. [Ref 2] In this land, we are judged by Allaah’s Sharee’ah and this is something known, even to the market workers. [Source: Qurratu Uyoonis Salafiyyah Bil-Ajwibah Al-Jaamiyah’ pages 389-390. Abridged & slightly paraphrased]

[Ref 1]: Even if the Muslims are ruled by an oppressive ruler, they must follow the guidelines of the Prophet regarding the manner in which to deal with such a situation. See article by Ustaadh Abu Khadeejah (may Allaah preserve him): http://www.abukhadeejah.com/the-tyranny-of-the-rulers-a-reason-for-rebellion/

[Ref 2]: See this link regarding the judgement on ruling by other than Allaah’s Sharee’ah