Trials Distinguish The Truthful Ones From The Liars- By Shaikh Fawzaan 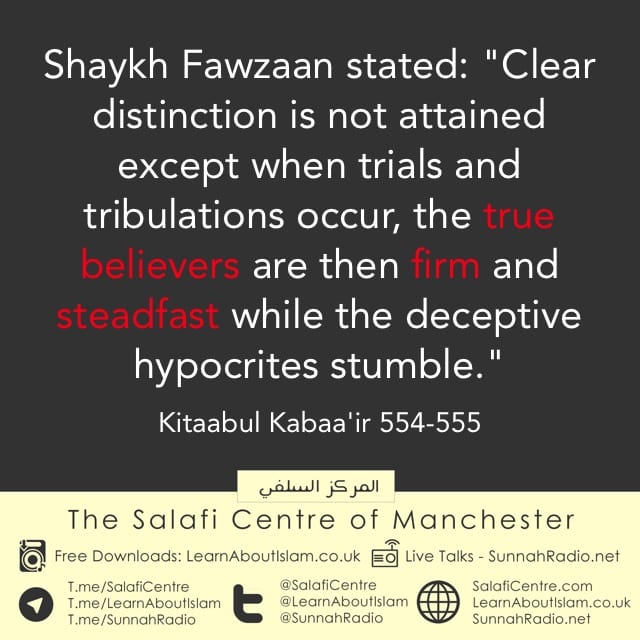 Shaykh Saalih al-Fawzaan stated, “Clear distinction is not attained except when trials and tribulations occur, the true believers are then firm and steadfast while the deceptive hypocrites stumble.”

Shaykh Fawzaan (Allah preserve him) explains trials and tribulations further in his explanation of the famous hadeeth of Hudhayfah ibnul Yamaan (Allah be pleased with him) read below.

Indeed Allaah pre-decreed and ordained that the creation will be visited by tribulations, trails and tests, in order that the truthful one is distinguished from the hypocrite. He (The Most High) said:

“Alif-Laam-Meem. Do people think that they will be left alone because they say: ‘’We believe,’’ and will not be tested. And We indeed tested those who were before them. And Allaah will certainly make (it) known (the truth of) those who are true, and will certainly make (it) known (the falsehood) of those who are liars, (although Allaah knows all that before putting them to test)’’ 29:1-3

Fitnah is a test. The human being will not be left alone because he says: I believe, I submit, I am a Muslim, I am a believer….he must be tried and tested. If he exercises patience and firmly holds onto his Eemaan at the (time) of tribulations, then indeed he is the one truthful to his Eemaan. If he deviates at the (time) of tribulations and turns away from his Religion, then this one is not truthful to his Eemaan.  He is a hypocrite (i.e. he testifies to Imaan with his tongue and hides disbelief in his heart), as Allaah (The Most High) said:

‘’And of mankind, there are some (hypocrites) who say: “We believe in Allaah and the Last Day” while in fact they believe not. They (think to) deceive Allaah and those who believe, while they only deceive themselves, and perceive (it) not! In their hearts is a disease (of doubt and hypocrisy) and Allaah has increased their disease. A painful torment is theirs because they used to tell lies’’. 2:8-10

‘’Allaah will not leave the believers in the state in which you are now, until He distinguishes the wicked from the good. Nor will Allaah disclose to you the secrets of the Ghaib (unseen), but Allaah chooses of His Messengers whom He pleases. So believe in Allaah and His Messengers. And if you believe and fear Allaah, then for you there is a great reward’’. 3:179

Allaah causes trials and tests to occur upon the people- upon the Muslims and the believers- in order to distinguish the truthful one from the liar, the true believer from the hypocritical liar, and the good one from the wicked one. This is from the Wisdom of Allaah (Glorified and Exalted Be He).  Fitan (trials) will come to pass upon the people as a result of this Wisdom (of Allaah).  If trials do not occur, then truth will be confounded with falsehood–the believer will be confused for the hypocrite, and there will not be a distinction between this one and that one.

A person is neither to lose hope nor despair, (and) he is not to make the people lose hope of a return to goodness. He should not make the people lose hope with regards to (the fact) that truth will prevail and falsehood will be repelled; because Allaah (Glorified and Exalted Be He) has made that promise and He does not fail to fulfill His promise. Imaam Ibnul Qayyim (rahimahullaah) said: ‘’The Religion is aided when put to the test; therefore do not be amazed for this is the way of Ar-Rahmaan (The Most Merciful).’’ Allaah said:

‘’And so are the days (good and not so good), We give to men by turns, that Allaah may test those who believe, and that He may take martyrs from among you. And Allaah likes not the Zaalimoon (polytheists and wrong-doers). And that Allaah may test (or purify) the believers (from sins) and destroy the disbelievers’’ 3:140-141

This is the wisdom behind the occurrence of trials and tribulations–so that the believers are purified, and so that they are made to exercise patience, firm upon the truth and cautioned for their mistakes, and in order that they may repent to Allaah (The Mighty and Majestic) and (so that) the kuffaar are destroyed. Therefore, (trials and tribulations) is purification for the believers and destruction for the kuffaar and all praise be to Allaah. It is obligated on the Muslim that he looks at (the affairs) with optimism–he neither looks at history and the state of affairs with pessimism and hopelessness nor make the people lose hope. It has been reported in a hadeeth: ‘’whoever says: the people are ruined, then he himself is ruined’’(Muslim) Therefore, the person neither loses hope in Allaah’s Mercy nor does he make people lose hope of solace from Allaah.  [Source: Booklet published by Daar Imaam Ahmad 1426/2005. Title: شرح حديث انا كنا في جاهلية]