Every Prophet Has His Enemies Amongst The Jinn and Mankind 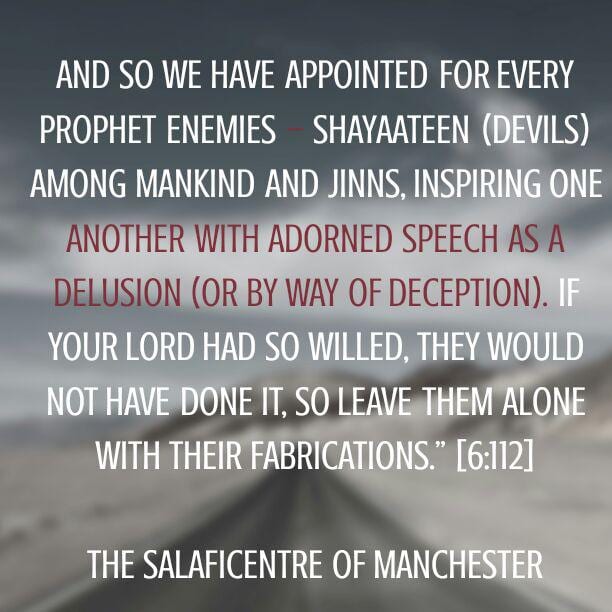 And so We have appointed for every Prophet enemies – Shayaateen (devils) among mankind and jinns, inspiring one another with adorned speech as a delusion (or by way of deception). If your Lord had so willed, they would not have done it, so leave them alone with their fabrications.” [Soorah Al-An’aam: Ayah 112]

Allaah [Glorified Be He] stated that they aid one another in opposing the command of the Prophets with what some of them inspire others of adorned speech, so that the gullible and feeble minded people are misled by it.  He [The Most High] stated the reason behind a perpetrator’s [adorned speech] and the reason why it is accepted by the people; then He [The Most High] mentioned [in ayah 113 Al-An’aam] the effects it has on those ignorant souls. When those souls incline towards such adorned speech and become pleased with it, they carry out what it calls them to do -in speech and action.  Therefore, ponder upon these verses and the sublime meanings they convey, for they clarify the roots of false principles and alert a person against them. And if you ponder upon the statements of the people of falsehood, you will indeed find them clothed with expressions and presented in a good light with sophisticated terms, which are quickly accepted by those deprived of sound discernment-to the extent that the wicked sinners would give [good] names to the greatest types of wicked deeds.