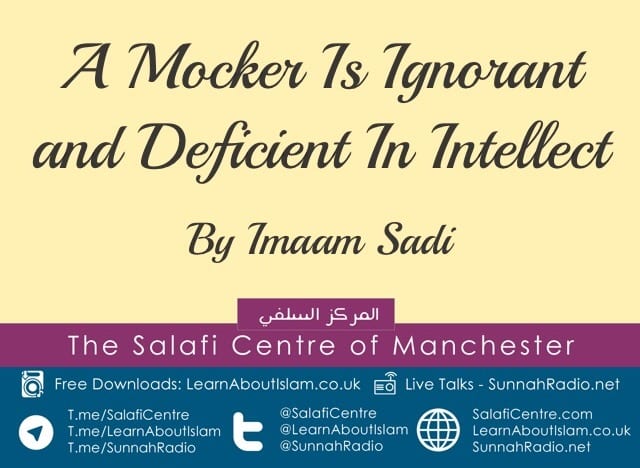 And (remember) when Musa (Moses) said to his people: “Verily, Allah commands you that you slaughter a cow.” They said, “Do you make fun of us?” He said, “I take Allah’s Refuge from being among Al-Jahilun (the ignorants or the foolish). [2:67]

A Jaahil [ignorant one] is that one who speaks with a speech that contains no benefit and he mocks at the people. As for a sensible person, he sees that one of the most blameworthy traits -which is abhorred by [sound] religion and intellect- is to mock at someone who is a human being like himself. And if he has been favoured over another person, then this favour necessitates that he thanks Allaah and shows mercy to Allaah’s servants.  Therefore, when Musa [alayhis-salaam] said this to them [i.e. I take Allaah’s Refuge from being among the ignorant], they knew that it [i.e. what he commanded them] was truth, so they said: [ادْعُ لَنَا رَبَّكَ يُبَيِّن لَّنَا مَا هِيَ -call upon your Lord for us that He may make plain to us what it is!(2:68)]