“They Thrust Their Fingers in Their Ears to Keep Out The Stunning Thunderclap For Fear of Death.”

by The Salafi Centre of Manchester | Mar 27, 2017 | Articles, Morals and Manners - 'Akhlaaq', Purification of The Soul, Qur'aan 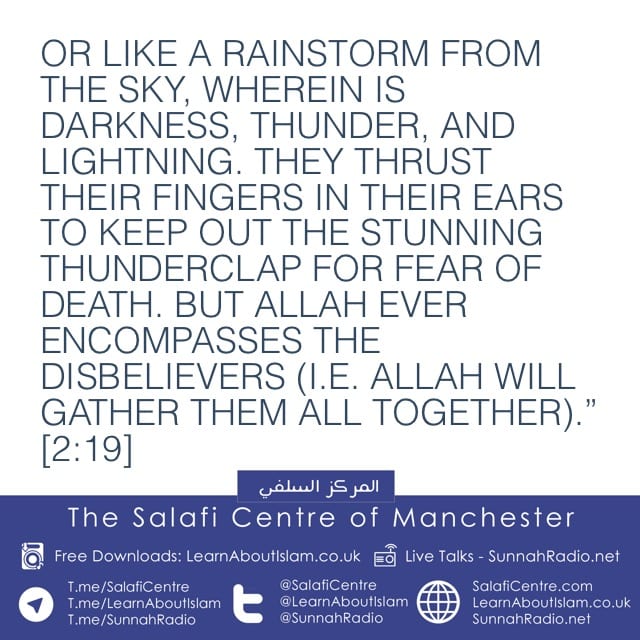 Or like a rainstorm from the sky, wherein is darkness, thunder, and lightning. They thrust their fingers in their ears to keep out the stunning thunderclap for fear of death. But Allah ever encompasses the disbelievers (i.e. Allah will gather them all together).” [2:19]

Allaah [The Most High] likened the hypocrites’ share of the guidance to that of a person who did not receive any share of a rainstorm, except the darkness, thunder and lightning. He has no share of what is around that [i.e. water], which is the aim behind a rainstorm, such as the source of life it [provides] for the land, the people, the trees and the animals. The darkness, thunder and lightning is not the goal, rather it is a means to receiving the complete benefit from that rainstorm. However, due to the ignorance of an ignorant person, his observation is limited to the darkness, thunder and lightning that is found in that rainstorm, which also necessitates [the presence] of severe cold, disruption of the traveller’s journey and hindering a person from his work. He [i.e. the ignorant person] does not have that insight to make him realise the life that is brought [to the land, the trees, animals etc] and [other] general benefits. This is the affair of every short sighted and feeble minded person, whose observation of a tangible difficulty does not go beyond [what he sees so as to realise] the desirable things behind that difficulty. This is the state of affairs of the majority of the creation, except those who are given clear-sightedness.