Danger of Utilising Eloquent Speech to Misguide The Slaves of Allaah

by The Salafi Centre of Manchester | Apr 9, 2017 | Morals and Manners - 'Akhlaaq', Purification of The Soul 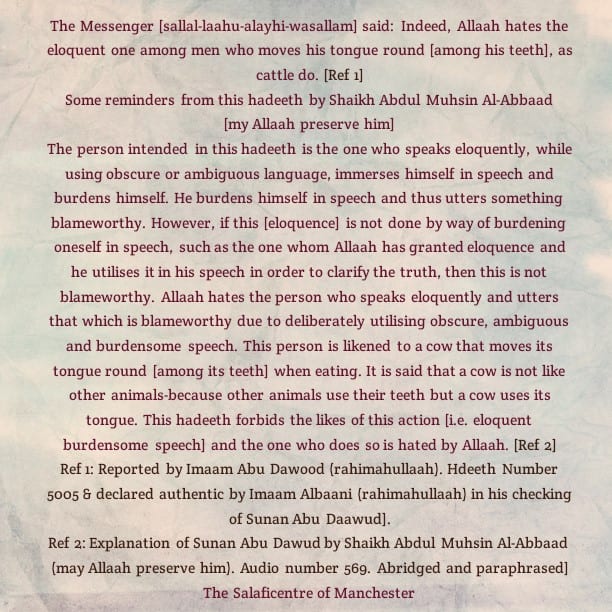 Indeed, Allaah hates the eloquent one among men who moves his tongue round [among his teeth], as cattle do. [Ref 1]

Some reminders from this hadeeth by Shaikh Abdul Muhsin Al-Abbaad

[my Allaah preserve him]

The person intended in this hadeeth is the one who speaks eloquently, while using obscure or ambiguous language, immerses himself in speech and burdens himself. He burdens himself in speech and thus utters something blameworthy. However, if this [eloquence] is not done by way of burdening oneself in speech, such as the one whom Allaah has granted eloquence and he utilises it in his speech in order to clarify the truth, then this is not blameworthy. Allaah hates the person who speaks eloquently and utters that which is blameworthy due to deliberately utilising obscure, ambiguous and burdensome speech. This person is likened to a cow that moves its tongue round [among its teeth] when eating. It is said that a cow is not like other animals-because other animals use their teeth but a cow uses its tongue. This hadeeth forbids the likes of this action [i.e. eloquent burdensome speech] and the one who does so is hated by Allaah. [Ref 2]