False Accusation- A Severe Threat against its Perpetrators!

by The Salafi Centre of Manchester | Apr 2, 2017 | Articles, Morals and Manners - 'Akhlaaq', Purification of The Soul, Worship - 'Ibaadah' 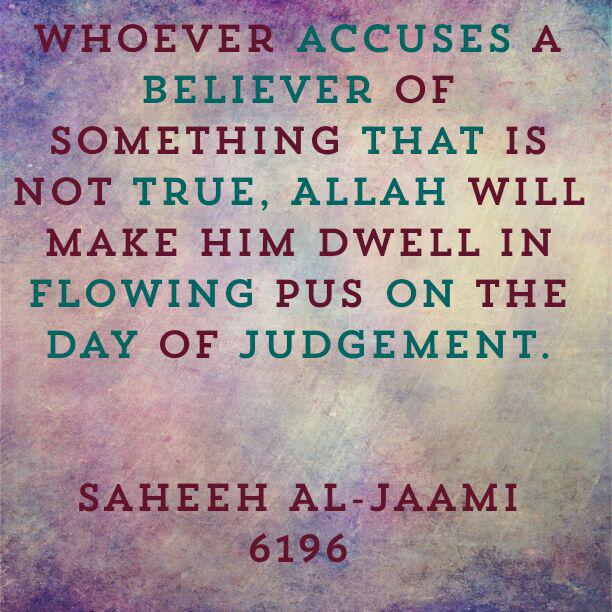 Whoever accuses a believer of something that is not true, Allaah will make him dwell in flowing pus on the Day of Judgement. [Saheeh Al-Jaami]

Repentance from sins committed against oneself and others

Know that Allaah’s Mercy is extensive and His Kindness is tremendous, and that He is [الجواد – (The Munificent, Bountiful); الكريم (The Bountiful, The Generous One Abundant in Good)][Ref 1]. He is the Most Merciful of all those who show mercy and the best of all those who forgive [Glorified and Exalted be He]. And know that also to have (the audacity to commit acts of) disobedience is a great evil, a great corruption and a cause of (incurring) the anger of Allaah; but when a servant repents to his Lord –a truthful repentance-Allaah accepts his repentance. Indeed, the Prophet (sallal-laahu-alayhi-wasallam) was asked many times about a man who (committed) a lot of such and such faults, (acts) of disobedience and various types of kufr, and then he repents; so Messenger (sallal-laahu-alayhi-wasallam) said: ‘’Repentance wipes away what was (committed) before it (i.e. sins)’’ and ‘’Islaam (i.e. when a person abandons kufr and becomes a Muslim) wipes away what was (committed) before it (i.e. sins).’’ Therefore, you should know -with certainty- that by way of truthful sincere repentance, Allaah wipes away sins and evil deeds, even kufr. And because of this Allaah [Glorified Be He] said:

[وَتُوبُوا إِلَى اللَّهِ جَمِيعًا أَيُّهَا الْمُؤْمِنُونَ لَعَلَّكُمْ تُفْلِحُونَ – And all of you beg Allah to forgive you all, O believers, that you may be successful. [24:31] So He (Allaah) connected success to repentance.

Allaah (Glorified Be He) said:

”O you who believe! Turn to Allah with sincere repentance! It may be that your Lord will remit from you your sins, and admit you into Gardens under which rivers flow (Paradise) [66:8]

Therefore, O brother! Truthful repentance is (incumbent) upon you- cling to it; be firm upon it and be sincere to Allaah in that. And (receive) glad tidings that it wipes away your sins, even if they are like a mountain.

The conditions (to be fulfilled in order for repentance to be accepted are) three: [1] To be regretful and remorseful regarding the past (acts of disobedience you committed); [2] To renounce and abandon the sins – the big and small (of them); [3] To have a firm resolve (or determination) not to return to it (i.e. not to commit them again). If you owe the people their rights- wealth or (you committed offences related to blood-shed, murder or causing injury etc) or violating their honour, then their rights must be given back to them. This is a fourth affair related to a complete repentance. It is incumbent upon you to give the people the rights they are owed. If the affair is related to retribution, then retribution is established (i.e. by the state), unless they (i.e. the people) permit that you give blood money; if related to wealth, you give them back their wealth, unless they forgive; if related to their honour and you did backbite them, you should seek their forgiveness; but if seeking their forgiveness will lead to evil, then there is no hindrance in refraining from (informing them that you did backbite them and that you seek their forgiveness); rather you should supplicate for them and seek Allaah’s forgiveness for them, and mention the good you know about them in the same place you did mention them with evil. This will be expiation for (that sin of backbiting). And it is incumbent upon you to proceed –without delay- towards repentance before death, and then exercise patience and be truthful. Allaah (Glorified and Exalted Be He) said:

”And those who, when they have committed Fahishah (illegal sexual intercourse etc.) or wronged themselves with evil, remember Allah and ask forgiveness for their sins; – and none can forgive sins but Allah – And do not persist in what (wrong) they have done, while they know. [3:135]

(So) understand the meaning of the (statement): وَلَمْ يُصِرُّواْ  – And do not persist in what (wrong)]- this means that they do not persist in sin, rather they repent, show regret and abandon the (sin) they committed; and they know [i.e. that persistence in sin is harmful, or that Allaah forgives the one who repents (Ref 2)]

Then Allaah [Glorified Be He] said:

For such, the reward is Forgiveness from their Lord, and Gardens with rivers flowing underneath (Paradise), wherein they shall abide forever. How excellent is this reward for the doers (who do righteous deeds according to Allah’s Orders). [3:136].  This is the reward for those who repent and do not persist in (sin)- for them the reward is paradise. [Ref 3]

The Best Supplication for Seeking Forgiveness

The Supplication in Arabic:

O Allaah, You are my Lord! There is no one who has the right to be worshipped except you. You created me and I am your slave, and I am (sincere) to my covenant and promise (to You) as much as I am able. I seek refuge with You from the evil I have done. I acknowledge in your presence all the blessings You have granted me, and I confess to You my sins. So forgive me, for indeed none is able to forgive (a slave his) sins, except You.’’ [Ref Bukhaari Hadeeth Number:Number:6306] [Ref 4]

[Ref 1: The translation of these two Names of Allaah was taken from the poster titled: The Beautiful Names of Allaah. (Minhaaj As-Sunnah Publications 2005) and Distributed by Salafipublications]