Those Who Forsake Ahlus Sunnah in Times of Trial, Hardship and Need–[Ahlul-Khadhlaan] 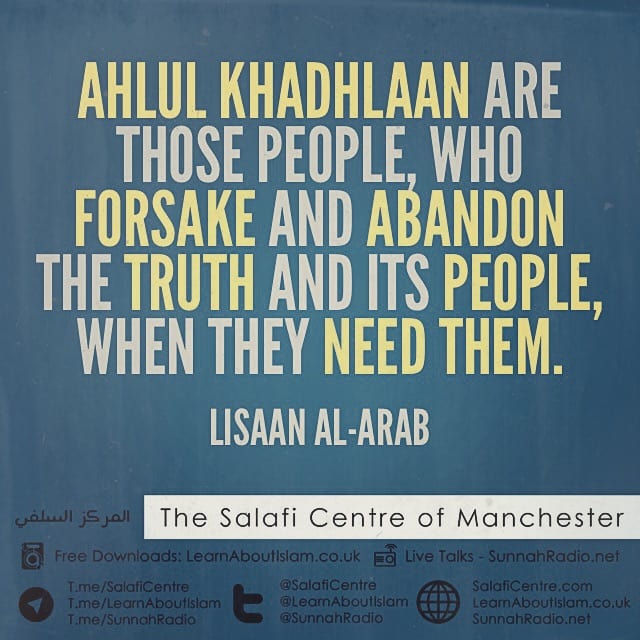 [ الخاذِلُ: ضد الناصر- Al- Khaadhil is the opposite of an-Naasir (the helper, one who aides you, supports and backs you up)]. So Al-Khadhlaan is when someone forsakes and abandons someone or something.  So Ahlul- khadhlaan are those people who forsake and abandon the truth and its people when they need them.   [So basically they are yellow bellied turncoats who run away from and leave the people of truth when they most need them]!!!  If you look at the verbal noun Takhdeel means: To incite or induce someone from abstaining from, or neglect in aiding, assisting the truth or its people; and also it means to hinder, withhold or prevent from aiding, assisting his companion.

If Allaah helps you, none can overcome you; and if He forsakes you, who is there after Him that can help you? And in Allaah (Alone) let the believers put their trust. (Surah Aali Imran 3:160)

“Ah! Woe to me! Would that I had never taken so-and-so as a friend! He indeed led me astray from the Reminder (this Qur’aan) after it had come to me. And Shaitaan (Satan) is ever a deserter to man in the hour of need.” (Surah Al-Furqan 25:28-29)