The Israa Wal Miraaj is from Allaah’s Great Signs, But There Is No Celebration Attached to It – Sh. B. Baaz 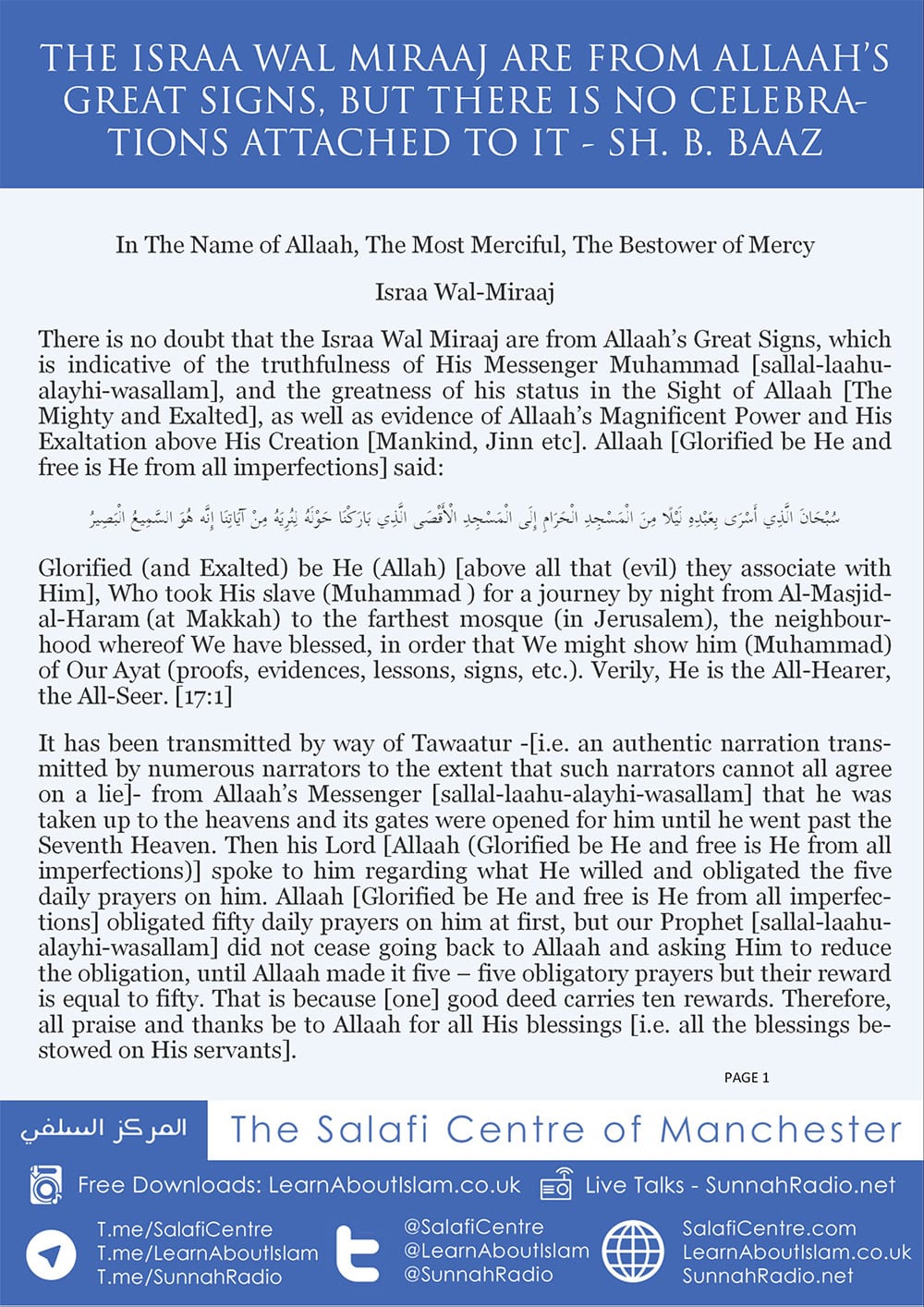 There is no doubt that the Israa Wal Miraaj are from Allaah’s Great Signs, which is indicative of the truthfulness of His Messenger Muhammad [sallal-laahu-alayhi-wasallam], and the greatness of his status in the Sight of Allaah [The Mighty and Exalted], as well as evidence of Allaah’s Magnificent Power and His Exaltation above His Creation [Mankind, Jinn etc]. Allaah [Glorified be He and free is He from all imperfections] said:

Glorified (and Exalted) be He (Allah) [above all that (evil) they associate with Him], Who took His slave (Muhammad ) for a journey by night from Al-Masjid-al-Haram (at Makkah) to the farthest mosque (in Jerusalem), the neighbourhood whereof We have blessed, in order that We might show him (Muhammad) of Our Ayat (proofs, evidences, lessons, signs, etc.). Verily, He is the All-Hearer, the All-Seer. [17:1]

It has been transmitted by way of Tawaatur -[i.e. an authentic narration transmitted by numerous narrators to the extent that such narrators cannot all agree on a lie]- from Allaah’s Messenger [sallal-laahu-alayhi-wasallam] that he was taken up to the heavens and its gates were opened for him until he went past the Seventh Heaven. Then his Lord [Allaah (Glorified be He and free is He from all imperfections)] spoke to him regarding what He willed and obligated the five daily prayers on him. Allaah [Glorified be He and free is He from all imperfections] obligated fifty daily prayers on him at first, but our Prophet [sallal-laahu-alayhi-wasallam] did not cease going back to Allaah and asking Him to reduce the obligation, until Allaah made it five – five obligatory prayers but their reward is equal to fifty. That is because [one] good deed carries ten rewards. Therefore, all praise and thanks be to Allaah for all His blessings [i.e. all the blessings bestowed on His servants].

This night -in which the Israa Wal Miraaj took place- has not been transmitted in the authentic narrations that it took place-specifically- in the month of Rajab or other than it. All that has been narrated about the specific [the month] it took place is not transmitted from the Prophet [sallal-laahu-alayhi-wasallam] with authentic chains of transmission, according to the scholars of Hadeeth. And with Allah is the Perfect Wisdom [free from all weaknesses, shortcomings, deficiencies, faults] as to why He made the people forget [the specific night the Israa and Miraaj took place].

And even if the specific night it took place was established, then still it would neither be permissible for the Muslims to specify any act of worship in relation to it nor celebrate it. That is because the Prophet [sallal-laahu-alayhi-wasallam] and his companions [radiyallaahu-anhum] neither celebrated it nor did they carry out any specific acts of worship on such a night. Had it been that celebrating it is legislated [in the religion], the Messenger [sallal-laahu-alayhi-wasallam] would have made it known to the Ummah-either by way of speech or action. And if anything was practiced [on that night by the Prophet (sallal-laahu-alayhi-wasallam) or his companions (radiyallaahu-anhum)], then it would have been known and widely known, and his companions [radiyallaahu-anhum] would have transmitted it to us.

Therefore, if exalting this night and celebrating it was something [legislated] in the religion, then neither would the Prophet [sallal-laahu-alayhi-wasallam] have neglected nor concealed it.

Therefore, when it [is it the case that nothing has been transmitted from the Prophet’s (sallal-laahu-alayhi-wasallam) speech or actions, and from his companions (radiyallaahu-anhu)] about this, then one knows that celebrating and exalting this night has nothing to do with Islaam, for indeed Allaah has perfected the religion for this Ummah, completed His favour upon them and censured the one who legislates in the religion that which is not part of it. Allaah [Glorified and Exalted be He] said:

This day, I have perfected your religion for you, completed My Favour upon you, and have chosen for you Islam as your religion. [5:3]

Or have they partners with Allah (false gods), who have instituted for them a religion which Allah has not allowed. And had it not been for a decisive Word (gone forth already), the matter would have been judged between them. And verily, for the Zalimun (polytheists and wrong-doers), there is a painful torment. [42:21]

And it has been transmitted from Allaah’s Messenger [sallal-laahu-alayhi-wasallam] in the authentic narrations that he warned against innovations in religion and stated explicitely that it is deviation- in order to warn the Ummah about the great danger of religious innovations and to keep them away from acting on it. It was transmitted from Aa’isha [radiyallaahu-anhaa] that the Prophet [sallal-laahu-alayhi-wasallam] said:

Whoever innovates something in this affair of ours [i.e. the religion of Islaam], it will be rejected.

Whoever performs [an act of worship] which not in accordance with our affair [i.e. the religion of Islaam], it will be rejected.

“I advise [or command] you to fear Allaah and to listen and obey [the Muslim ruler in what is good] even if a slave is a leader over you. Certainly, the one who will live among you will see lots of differences. So adhere to my Sunnah and the Sunnah of the right-guided Khulafaa. Bite onto that with your molar teeth. And beware of the newly-invented matters in [the religion], for every newly invented affair in the religion is a Bidah [religious innovation] and every bidah is misguidance.”

The narrations that convey the meaning of this affair are many. And it has been transmitted from the companions of Allaah’s Messenger and the pious predecessors [i.e. the first three generations of Islaam] after them- that they warned against religious innovations and [gave advice to the people in order to make them fearful of practicing religious innovations]. That is because such practices are additions [i.e. acts that are not legislated by Allaah and His Messenger] and [practicing them] is tantamount to legislating something in the religion, which Allaah has not ordained. It is tantamount to belittling the religion of Islam and accusing it [of imperfection] after it was perfected.

Then the Shaikh [rahimahullaah] said: And when it is the case that Allah has obligated on Muslims to offer advice to another and explain what He has legislated for them in the Religion, and forbade one from concealing knowledge, I saw that I should notify [or warn] my Muslim brothers about this religious innovation- which has spread to many regions, to the extent that some people think that it is something related to the religion. [Abridged and slightly paraphrased…see link: