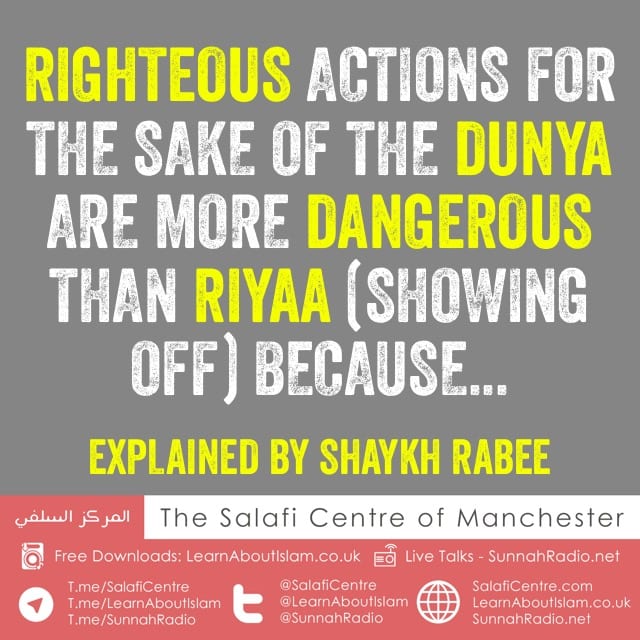 Whosoever desires the life of the world and its glitter; to them We shall pay in full (the wages of) their deeds therein, and they will have no diminution therein.They are those for whom there is nothing in the Hereafter but Fire; and vain are the deeds they did therein. And of no effect is that which they used to do. (Hud: 15-16)

Some of the Imams said: Indeed, carrying out deeds for the sake of the worldly life is greater [sin] and more dangerous than riyaa [showing off]- because a Muslim can be exposed to riyaa sometimes; as for a person whose habitual [aim] is to [receive] the worldly things and its adornments, then this is grave destruction, and Allaah’s Refuge is sought.

This is a type of shirk [related to the performance of] righteous deeds, which negates ikhlaas [sincerity]. Ibn Abbas [radiyallaahu-anhumaa] explained this as: an individual prays, fasts and stands in the night prayer, whilst desiring the worldly [gains] by way of that- desiring status. All of this is [considered to be] worldly goals; If a person intent [is to receive these worldly things] by way of his worship, then indeed he has fallen into a bottomless pit of destruction, and Allaah’s Refuge is sought.

Just as Allaah has threatened nullification of the deeds and [promised] a severe torment for the one who seeks nearness to Allaah outwardly with righteous deeds, whilst desiring the worldly things by way of that.

Therefore, take a severe warning regarding those deeds legislated by Allaah through which nearness to Allaah is sought outwardly, whilst the basis of one’s intent behind those deeds is only [to achieve] those worthless [worldly] goals – because in the Sight of Allaah the worldly life is not even equal to the weight of a mosquitoe’s wing.

Therefore, how can one make the religion a means to an end to receive these goals and lowly objectives.

Likewise, Allah says in other Aayaat -such as in Soorah Ash-Shoora-:

This Aayah applies to the disbelievers first and foremost, and it applies to the hypocrites and the people of riya [i.e. the show offs], those who do not desire from their deeds and [outward adherence to] Islam, except the worldly things and its adornments, and Allaah’s refuge is sought.

The Aayaat regarding this [affair] are many, which clarify what negates sincerity to Allaah in the Religion, [The Blessed and Most High], in Aqeedah and worship.