Ignorance is One of The Traits of a Scornful Person! 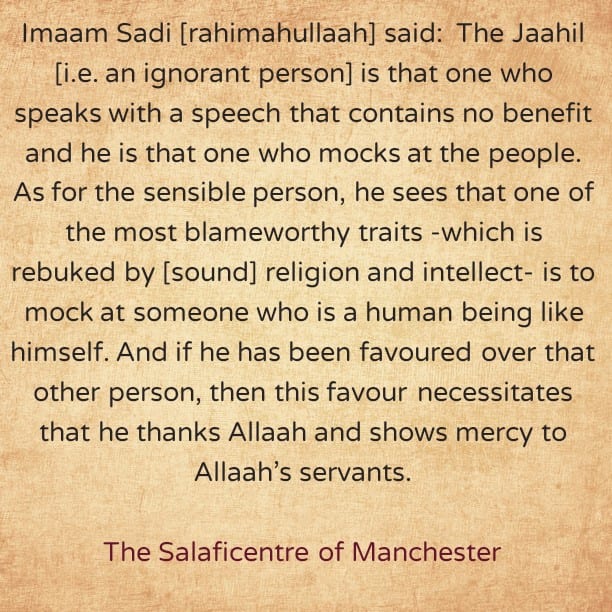 And [remember] when Musa [Moses] said to his people: “Verily, Allah commands you that you slaughter a cow.” They said, “Do you make fun of us?” He said, “I take Allah’s Refuge from being among Al-Jahilun [the ignorants or the foolish].” [2:67]

That is because the Jaahil [i.e. an ignorant person] is that one who speaks with a speech that contains no benefit and he is that one who mocks at the people. As for the sensible person, he sees that one of the most blameworthy traits -which is rebuked by [sound] religion and intellect- is to mock at someone who is a human being like himself. And if he has been favoured over that other person, then this favour necessitates that he thanks Allaah and shows mercy to Allaah’s servants.  Therefore, when Musa [alayhis-salaam] said this to them [i.e. I take Allaah’s Refuge from being among the ignorant], they knew that it [i.e. what he commanded them] was truth, so they said: [ادْعُ لَنَا رَبَّكَ يُبَيِّن لَّنَا مَا هِيَ -call upon your Lord for us that He may make plain to us what it is! [2:68)]