He Says this to Justify His Sins – Shaykh Saalih Al-Fawzaan 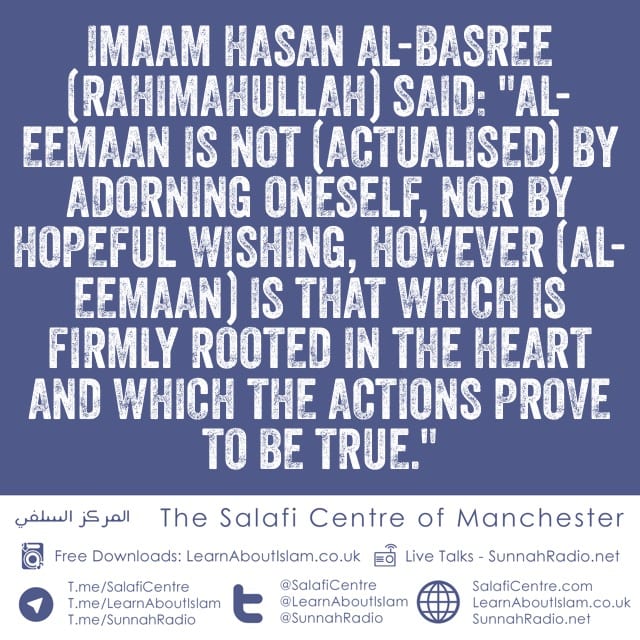 What is your opinion regarding an individual, when it is said to him: “Fear Allah concerning yourself from (performing) sins.” For example: shaving the beard, smoking, isbaal (trousers below the ankles),he replies:

“Al-Eeemaan is in the heart and not in the cultivation of the beard, or in leaving off smoking, nor in dragging garments below the ankles (isbaal)!”

“Indeed Allah does not look to your bodies – intending by that, the beard; smoking and dragging of garments below the ankles (isbaal) – but he looks to your hearts?”

These statements – which many of the foolish and mistaken ones say – are many, and it is a statement of truth desiring by it falsehood, because the speaker desires to justify what he has fell into from sins; because he claims that Al-Eemaan – which is in the heart – suffices (removes the need) of performing acts of worship  and (removes the need) of abandoning the prohibitions, this is a clear error. Verily Al-Eemaan is not in the heart only, rather Al-Eemaan as has been defined by Ahlus-Sunnah wal-Jamaa’ah as being:

“Al-Eemaan is statement with the tongue, belief with the heart and action of the limbs.”

Imaam Hasan Al-Basree (rahimahullah) said: “Al-Eemaan is not (actualised) by adorning oneself, nor by hopeful wishing, however (Al-Eemaan) is that which is firmly rooted in the heart and which the actions prove to be true.”

Therefore the performing of sins and abandoning of obedience to Allah is an evidence that there is no Eemaan in the heart, or that the Eemaan is deficient. Allah says:

Whosoever believed in Allâh and the Last Day, and worked righteousness (Al-Maa’idah: 69)

Truly those who believe, and do deeds of righteousness (Al-Baqarah: 277)

Whoever believes in Allâh and the Last Day and do righteous good deeds (Al-Baqarah: 62)

Consequently, Al-Eemaan is not called complete Eemaan, except if it is accompanied with righteous actions and abandoning of sins, He – the Most High – says:

By Al-‘Asr (the time). Verily, man is in loss,  Except those who believe (in Islâmic Monotheism) and do righteous good deeds, and recommend one another to the truth (i.e. order one another to perform all kinds of good deeds (Al-Ma’ruf) which Allâh has ordained, and abstain from all kinds of sins and evil deeds (Al-Munkar) which Allâh has forbidden), and recommend one another to patience (for the sufferings, harms, and injuries which one may encounter in Allâh’s Cause during preaching His religion of Islâmic Monotheism or Jihâd). (Al-Asr 1-3)

O you who believe! Obey Allâh and obey the Messenger. (An-Nisaa: 59)

O you who believe! Answer Allâh (by obeying Him) and (His) Messenger when he (SAW) calls you[] to that which will give you life. (Al-Anfaal: 24)

Therefore, outward actions –  without belief in the heart – are not sufficient, because this is a characteristic of the hypocrites, those who are in the lowest level of the hell-fire. Likewise belief in the heart – without speech of the tongue and action of the limbs – is not sufficient because this is the way of the Murji’ah of the Jahmiyyah and other than them. It is a false madhab, rather it is a must to have belief in the heart, statement of the tongue and action of the limbs and performing sins is an evidence of the weakness of Al-Eemaan in the heart and decreases it, because Al-Eemaan increases with obedience (of Ar-Rahmaan) and decreases with disobedience (to Ar-Rahmaan).