17 Benefits from Ḥadith: Whoever Allāh Wants Good for He Gives Him Fiqh of The Religion – Shaykh ‘Abdul Muḥsin 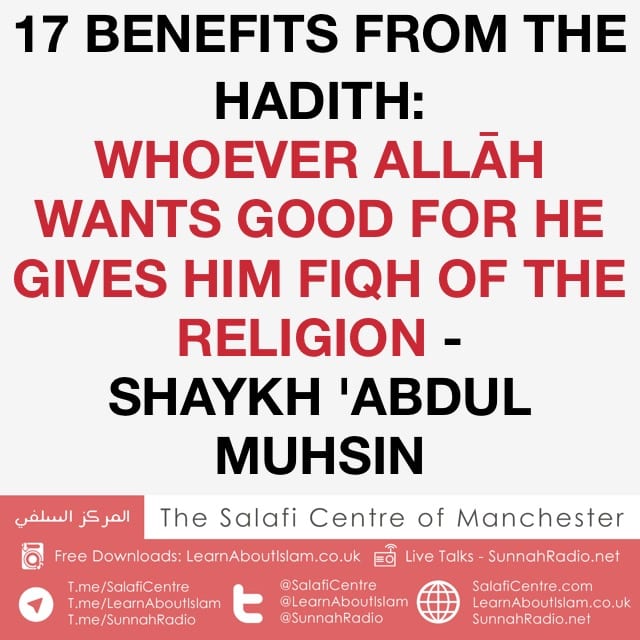 Mu’āwiyah (Allāh be pleased with him) said (whilst delivering a khutbah) (1), I heard the Prophet (sallallāhu alaihi wa sallam) saying, “If Allāh wants to do good to a person, He makes him comprehend the religion. I am just a distributor, but the grant is from Allāh. (And remember) that this nation (those upon Tawheed and Sunnah) will not cease to be obedient to Allāh’s orders and they will not be harmed by those who oppose them until Allah’s order (Day of Judgment) is established.” (2)

Benefits Extracted from the Ḥadith:

(1) Shaykh ‘Abdul Muḥsin: The place where Mu’āwiyah ibn Abī Sufyān delivered the khutbah is known and it was the pulpit (minbar) of Allāh’s Messenger (sallāhu alaihi wa sallam) in Madīnah, as alluded to by one of the narrators in Ṣahīh Muslim, and clarified by the narration reported by Ibn ‘Abdil Barr.

(3) “It is impossible that the Salaf would unite upon error or misguidance. So in his subscribtion to the way of the Salaf, the Salafi has attached himself to that which cannot go wrong. This is taken from the hadith: “My Ummah will not unite upon error.” [Reported by at-Tirmidhee and Haakim – Sahih], and it is not correct that this hadith refers to the people of later ages, since it was only in the era of the Prophet, peace be upon him, and his Companions that the Ummah was free from widespread division and deviation. The deviant sects separated themselves from the Jamaa’ah after them, and from that time onwards their was disunity.” Introduction to the Salafi Dawah by Salafi Publications