by The Salafi Centre of Manchester | Sep 25, 2017 | Fatawa-Rulings, Scholars of Islam 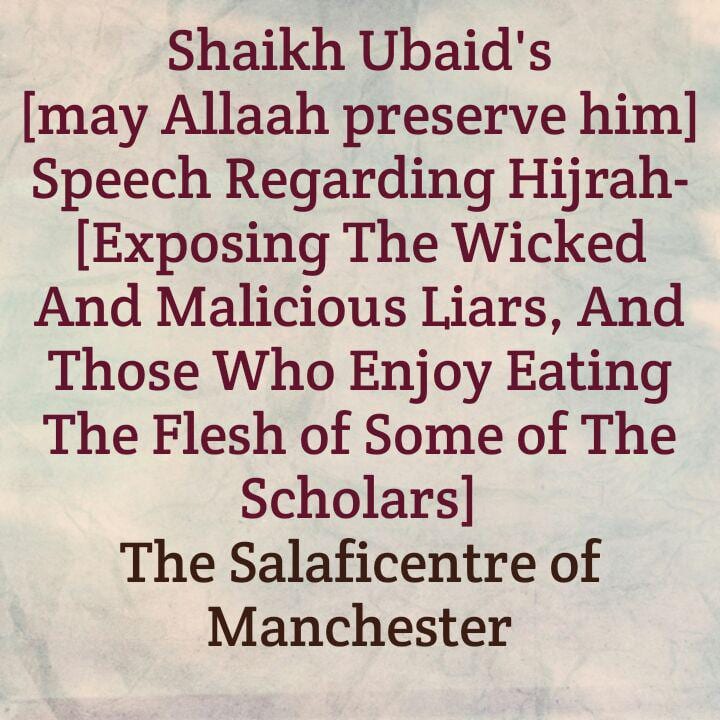 In the name Allaah and all  praise is due to Allaah.  May Allaah send His salaah and salaam upon our Prophet Muhammad and his family and all his companions.  I say: The establishment of this affair is not excluded from that which the Book of our Lord and the Sunnah of our Prophet demonstrated; and [that which] the Imaams of Knowledge and the Religion [past and present follow(ed), pertaining to migration from the lands of kufr to the lands of Islaam, or from a kaafir land or to another kaafir land in which the Muslim’s Religion and honour is safe. In summary, the one who sits and accompanies me knows that of me. I say, and with Allaah is facilitation of Tawfeeq:

Secondly: What is apparent to me concerning Hijrah at present is of  two examples [affairs]; [1] Obligation  [2] Sunnah. The Obligatory Hijrah: If a person is in a kaafir land [being] put to trial in his religion and  honour, and he is unable to establish that which Allaah has enjoined upon him pertaining to his Religion and worship of his Lord, then Hijrah is obligatory upon him on the basis of what has already been clarified; if he is able to make Hijrah, yes, then he migrates to a Muslim land and this is the Asl, or to a Kaafir land in which his Religion and honour is safe, just as the Prophet [sallal-laahu-alayhi-wasallam] commanded the Muslims to migrate to Habasha [Ethiopia] when the Quraish harmed them; and [He -(sallallaahu-alayhi-sallam)] mentioned that there was a king [in Habasha] who oppresses no one under his protection, or as he [sallal-laahu-alayhi- sallam] said: ”[oppresses no one] next to him.”  This is what I affirm and adhere to as [religion] to Allaah.

As for the recommended prescribed Hijrah: It is the Hijrah from the land of the disbelievers to the lands of Islaam in order to strengthen his religion, or to gain knowledge, or to earn lawful earnings in the land of  Islaam. So when this is established- and if I did say on a day from the days about  making hijrah to Birmingham unrestrictedly- then this is a slip [mistake] and  I seek Allaah’s forgiveness from this if it was an upright transmission of the trustworthy people of Sunnah. This is the third point or affair.

The Forth Point: Many amongst the people in Europe or in the Asian States in India or other than it ask; they are put to trial in their Religion by some of the innovators from the brelviyyah- the  extremist soofees from the people of Wahdatul Wujood and other than them. So I say them [i.e. those put to trial]: Make Hijrah to Birmingham because  Maktabatus Salafiyyah is there. Therefore, my answer to them is not that Birmingham is a land of Hijrah unrestrictedly, for Birmingham is from the cities of Britain and Britain is a Kaafir Land.  I urge them to make Hijrah to where they will find the Maktabah, where they will affiliate with Maktabatus Salafiyyah over there [in Britain], and to participate in lessons and muhaadaraat within which are scholars of excellence, from them: Ash-Shaikh Abdullaah Bin Abdur Rahmaan Al-Ghudiyaan from the Committee of Major Scholars and Fatwah Committee of the Kingdom of Saudi Arabia.  He delivered lessons to them and has died [rahimahullaah]. So the likes of this Maktbah is worthy of being affiliated to [for] the one who cannot find a place to seek shelter; especially if he has a desire to attain knowledge of the Sharee-ah, particularly in the affair of  Aqeedah, the Sunnah and waging war against innovation and its people.  This is what I mentioned and I affirm it.  And I repeat: if I did
establish [affirm] the opposite of that, then it is one of two affairs:  [1] It is either a slip [mistake] from me or [2] a distortion [misrepresentation] of (my speech).  And that which is from me, then indeed I seek the forgiveness of Allaah from it; and that which is a distortion [misrepresentation] of my speech and a forged saying on me, then I ask Allaah to set it aside between me and my adversaries on yaumul qiyaamah.  [End of quote]