by The Salafi Centre of Manchester | Oct 31, 2017 | Deviated Groups, Sects and Parties, Purification of The Soul 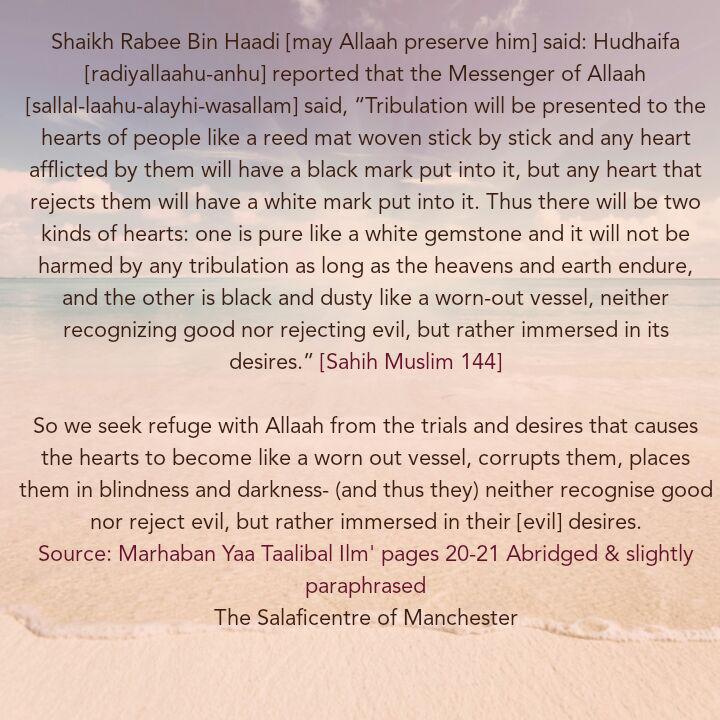 Shaikh Rabee Bin Haadi [may Allaah preserve him] said: Hudhaifa [radiyallaahu-anhu] reported that the Messenger of Allaah [sallal-laahu-alayhi-wasallam] said, “Tribulation will be presented to the hearts of people like a reed mat woven stick by stick and any heart afflicted by them will have a black mark put into it, but any heart that rejects them will have a white mark put into it. Thus there will be two kinds of hearts: one is pure like a white gemstone and it will not be harmed by any tribulation as long as the heavens and earth endure, and the other is black and dusty like a worn-out vessel, neither recognizing good nor rejecting evil, but rather immersed in its desires.” [Sahih Muslim 144]

So, we seek refuge with Allaah from the trials and desires that causes the hearts to become like a worn out vessel, corrupts them, places them in blindness and darkness- (and thus they) neither recognise good nor reject evil, but rather immersed in their [evil] desires.