[13A] Excerpts From Shaikh Rabee’s Book Titled ‘Marhaban Yaa Taalibal Ilm’ -[Strive In Obedience to Allaah and Excel Others In Good, But Beware of Blameworthy Competition And Envy] 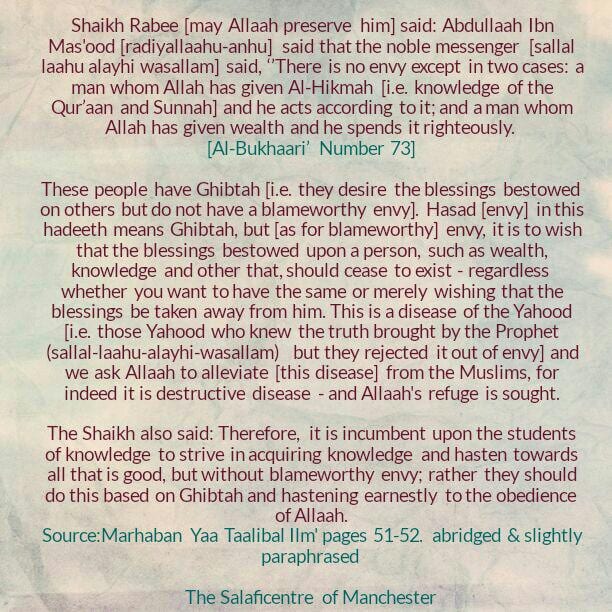 Abdullaah Ibn Mas’ood [radiyallaahu-anhu] said that the noble messenger [sallal laahu alayhi wasallam] said, ‘’There is no envy except in two cases: a man whom Allah has given Al-Hikmah [i.e. knowledge of the Qur’aan and Sunnah] and he acts according to it; and a man whom Allah has given wealth and he spends it righteously. [Al-Bukhaari’ Number 73]

These people have Ghibtah [i.e. they desire the blessings bestowed on others but do not have a blameworthy envy]. Hasad [envy] in this hadeeth means Ghibtah, but [as for blameworthy] envy, it is to wish that the blessings bestowed upon a person, such as wealth, knowledge and other that, should cease to exist – regardless whether you want to have the same or merely wishing that the blessings be taken away from him. This is a disease of the Yahood [i.e. those Yahood who knew the truth brought by the Prophet (sallal-laahu-alayhi-wasallam) but they rejected it out of envy] and we ask Allaah to alleviate [this disease] from the Muslims, for indeed it is destructive disease – and Allaah’s refuge is sought.

So, the Hasad [Envy] intended in this hadeeth [i.e. the hadeeth of Abdullaah] Ibn Mas’ood] is Al-Ghibtah, which is to wish for the same blessings given to another person [without wishing that he be deprived of it]; for example, Allaah gives a person knowledge and the [ability] to perform good deeds, so you wish that Allaah should also give you knowledge and the [ability] to perform good deeds just as it has been bestowed upon that person. This is Ghibtah and it is praiseworthy. It is a [praiseworthy] striving to excel one another in good deeds. Allaah said: [وَفِى ذَٲلِكَ فَلۡيَتَنَافَسِ ٱلۡمُتَنَـٰفِسُونَ – And for this [i.e. paradise] let (all) those strive who want to strive (i.e. hasten earnestly to the obedience of Allah)]. Therefore, it is incumbent upon the students of knowledge to strive in acquiring knowledge and hasten towards all that is good, but without blameworthy envy; rather they should do this based on Ghibtah and hastening earnestly to the obedience of Allaah.

Therefore, in the hadeeth [i.e. hadeeth reported by Abdullaah Ibn Mas’ood], the Messenger of Allaah [sallal-laahu-alayhi-wasallam] urged the Ummah to [hasten and seek to excel one another] in good deeds, such as in [acquiring] knowledge, [performance of the] Salaah etc. The Prophet said, ‘’The best rows are the first rows [Muslim 440]. [The Prophet also said], ‘’If the people knew [the reward for] pronouncing the Adhaan and for standing in the first row [in the congregational prayer] and found no other way to get it except by drawing lots, they would do so.’’ [Al-Bukhaari 654]

Hastening to get to the first row is a praiseworthy deed. Likewise [it is praiseworthy to] hasten towards seeking knowledge, seeking to become proficient in it, excel and become talented in it. I ask Allaah to facilitate i.e. ease and the means] for the Mutanaafiseen [i.e. those striving and hastening towards all good], so that there arises from this ummah the likes of the senior Imaams, such as Al Awzaa’ee, Ath-Thawri, Maalik, Ash-Shaafiee, Ahmad, Ibn Taymiyyah, Muhammad Ibn Abdil Wahhaab and those like them amongst the Imaams of guidance – those by way of whom Allaah raised the guiding light of Islaam and guided the nations, and whose knowledge enlightened the whole world. [Source: Marhaban Yaa Taalibal Ilm’ pages 51-52. Abridged and slightly paraphrased]