by The Salafi Centre of Manchester | Nov 27, 2017 | Da'wah - Calling To Islam, Pearls of Wisdom, Purification of The Soul, Scholars of Islam, Seeking Knowledge, Worship - 'Ibaadah' 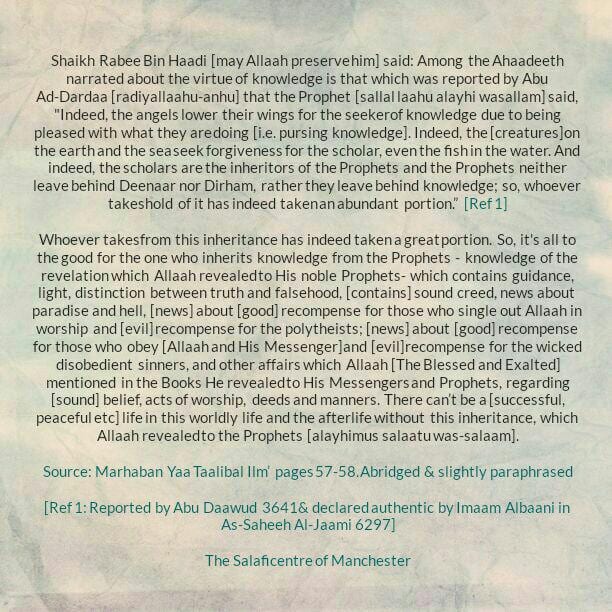 Shaikh Rabee Bin Haadi [may Allaah preserve him] said: Among the Ahaadeeth narrated about the virtue of knowledge is that which was reported by Abu Ad-Dardaa [radiyallaahu-anhu] that the Prophet [sallal laahu alayhi wasallam] said, “Indeed, the angels lower their wings for the seeker of knowledge due to being pleased with what they are doing [i.e. pursuing knowledge]. Indeed, the [creatures] on the earth and the sea seek forgiveness for the scholar, even the fish in the water. And indeed, the scholars are the inheritors of the Prophets and the Prophets neither leave behind Deenaar nor Dirham, rather they leave behind knowledge; so, whoever takes hold of it has indeed taken an abundant portion.” [Ref 1]

Whoever takes from this inheritance has indeed taken a great portion. So, it’s all to the good for the one who inherits knowledge from the Prophets –  knowledge of the revelation which Allaah revealed to His noble Prophets- which contains guidance, light, distinction between truth and falsehood, [contains] sound creed, news about paradise and hell, [news] about [good] recompense for those who single out Allaah in worship and [evil] recompense for the polytheists; [news] about [good] recompense for those who obey [Allaah and His Messenger] and [evil] recompense for the wicked disobedient sinners, and other affairs which Allaah [The Blessed and Exalted] mentioned in the Books He revealed to His Messengers and Prophets, regarding [sound] belief, acts of worship, deeds and manners. There can’t be a [successful, peaceful etc] life in this worldly life and the afterlife without this inheritance, which Allaah revealed to the Prophets [alayhimus salaatu was-salaam].