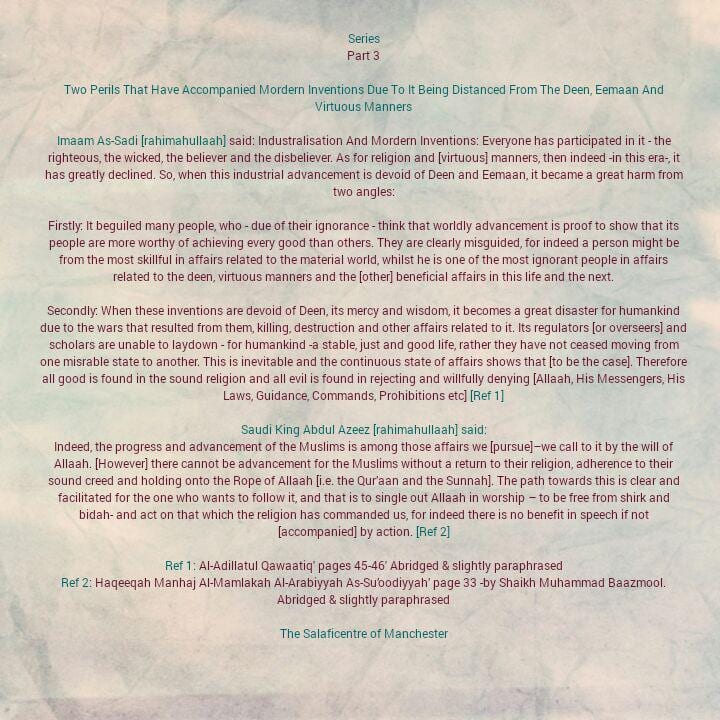 Imaam As-Sadi [rahimahullaah] said: Industralisation And Mordern Inventions: Everyone has participated in it – the righteous, the wicked, the believer and the disbeliever. As for religion and [virtuous] manners, then indeed -in this era-, it has greatly declined. So, when this industrial advancement is devoid of Deen and Eemaan, it became a great harm from two angles:

Firstly: It beguiled many people, who – due of their ignorance – think that worldly advancement is proof to show that its people are more worthy of achieving every good than others. They are clearly misguided, for indeed a person might be from the most skillful in affairs related to the material world, whilst he is one of the most ignorant people in affairs related to the deen, virtuous manners and the [other] beneficial affairs in this life and the next.

Secondly: When these inventions are devoid of Deen, its mercy and wisdom, it becomes a great disaster for humankind due to the wars that resulted from them, killing, destruction and other affairs related to it. Its regulators [or overseers] and scholars are unable to laydown – for humankind -a stable, just and good life, rather they have not ceased moving from one misrable state to another. This is inevitable and the continuous state of affairs shows that [to be the case]. Therefore all good is found in the sound religion and all evil is found in rejecting and willfully denying [Allaah, His Messengers, His Laws, Guidance, Commands, Prohibitions etc]

Saudi King Abdul Azeez [rahimahullaah] said: Indeed, the progress and advancement of the Muslims is among those affairs we [pursue]–we call to it by the will of Allaah. [However] there cannot be advancement for the Muslims without a return to their religion, adherence to their sound creed and holding onto the Rope of Allaah [i.e. the Qur’aan and the Sunnah]. The path towards this is clear and facilitated for the one who wants to follow it, and that is to single out Allaah in worship – to be free from shirk and bidah- and act on that which the religion has commanded us, for indeed there is no benefit in speech if not [accompanied] by action.