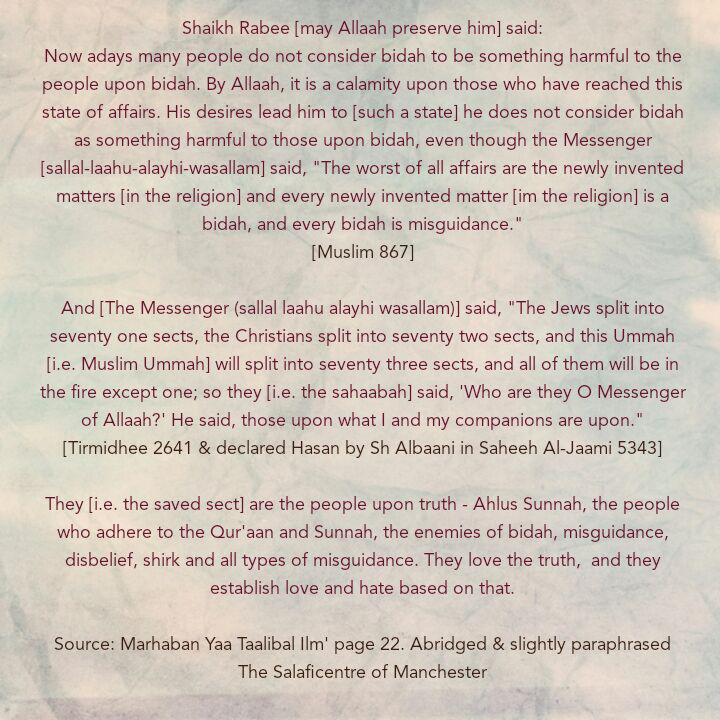 Nowadays many people do not consider bidah to be something harmful to the people upon bidah. By Allaah, it is a calamity upon those who have reached this state of affairs. His desires lead him to [such a state] he does not consider bidah as something harmful to those upon bidah, even though the Messenger [sallal-laahu-alayhi-wasallam] said, “The worst of all affairs are the newly invented matters [in the religion] and every newly invented matter [im the religion] is a bidah, and every bidah is misguidance.” [Muslim 867]

They [i.e. the saved sect] are the people upon truth – Ahlus Sunnah, the people who adhere to the Qur’aan and Sunnah, the enemies of bidah, misguidance, disbelief, shirk and all types of misguidance. They love the truth, and they establish love and hatred based on that. [End of Quote]

Read articles in the following links about the deviated sects

This Ummah will divide into 73 sects… Shaykh al-Fawzān explains what it means: Sharhus-Sunnah Barbahārī