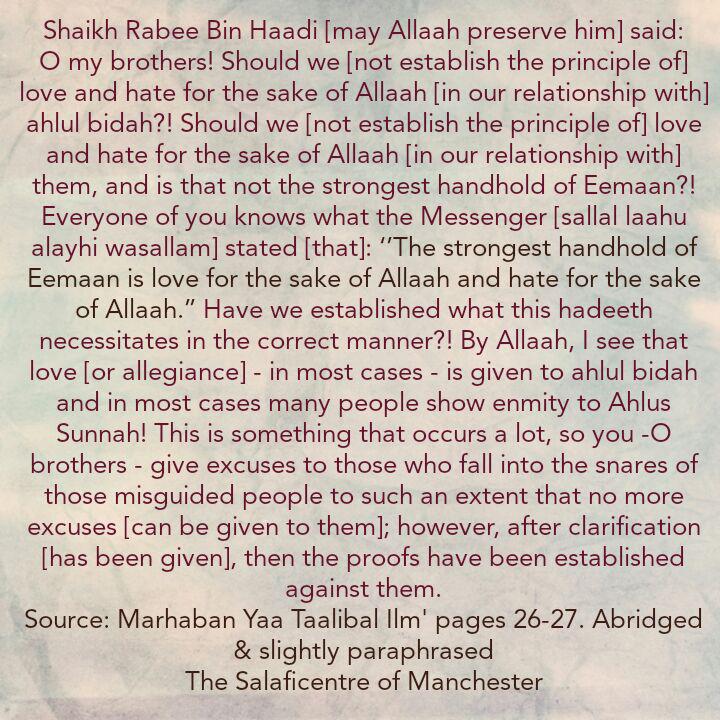 Ibn Abbaas [radiyallaahu-anhumaa] said: Do not sit with the people of desires [i.e. ahlul bidah], for indeed sitting with them will cause sickness to the hearts. [Al-Ibaanah 2/438

Shu-aib (rahimahullaah) narrated: I said to Ibn Seereen: ‘’what is your view concerning listening to the people of desires (i.e. ahlul bidah)? He said: ”We neither listen to them nor honour (them).” [Siyar A’laam Nubulaa: 4/611]

Imaam Sufyaan Ath-thawri [rahimahullaah] said: The one who sits with a person of innovation is not safe from one of three [calamities]: ”[a] Either he becomes a trial for other than himself; [b] or something of [misguidance] enters into his heart, and thus he slips by way of that and Allaah enters him into the hell fire; [3] or he says: ”By Allaah, I don’t care what they say because I am sure of myself”, but whoever feels safe about his religion [without Allaah’s guidance, protection etc] in the twinkling of an eye, it will be snatched away from him. [Source: البدع والنهي عنها  of Ibn Wadaah page 54]

Shaikh Saaleh Al-Fawzaan (may Allaah preserve him) said: It is not permissible to exalt and praise the innovators even if they have some truth with them. That is because raising and praising them will spread their bidah and place them amongst the sincere ones-those who are taken as examples amongst distinguished men of this Ummah. The Salaf warned against having trust for the innovators, (warned against) praising them and their gatherings. In this regard, Asad Ibn Musa (rahimahullaah) wrote: ”Beware of being a brother of the innovator (by association) or a companion of his, or one whom you sit with; for indeed it has been narrated that ‘Whoever sits with a person of innovation has left the protection of Allaah and is entrusted to himself’.

The innovators must be warned against and kept away from even if they have some truth with them. Indeed, the most astray are not devoid of some truth, but as long as they have with them innovation, opposition and sinful views, it is not permissible to praise and exalt them. It is impermissible to not have an objection against their innovation because this spreads bidah, belittles the Sunnah and by way of this the innovator will emerge and become a guide for the Ummah.

As for giving consideration (to the fact) that the innovation has some truth, this does not justify praising him. This is -to a far greater extent- against what is of overriding benefit and it is known in relation to a principle in the religion that averting harm takes precedence over seeking that which is of benefit. And with regards to having hatred for the innovator, the harm that is averted from the Ummah is weightier than the benefit possessed by the innovator. And had we adhered to this concept (i.e. praising the innovator because he has some truth with him), then no one would have been judged to be misguided and declared an innovator. That is because there is not an innovator except that he has some truth and adherence to the Sunnah. The innovator (may) neither be a disbeliever nor be in opposition to all the Islamic legislation; rather he is either an innovator in some or most of the affairs. However, if the innovation is particularly related to affairs of Creed and Methodology, then the affair is dangerous indeed because it will become an example (to be followed); innovation will spread and the innovators will become active in spreading their innovation.

So, this person who praises the innovators and makes their affair obscure to the people -due to some truth they (i.e. innovators) have – is one of two (people): He is either one ignorant of the methodology of the pious predecessors and their stance against the innovators, and it is neither permissible for this ignorant one to speak nor is it permissible for the Muslims to listen to him; or he is one who has an objection to the truth because he knows the danger of innovation and the innovators, but he wishes to spread innovations. Nevertheless, this is a dangerous affair and it is not permissible to be lackadaisical with regards to innovation and its people, whatever that may be.  [Source: At-Tabdee Wat-Tafseeq Wat Takfeer. Page: 72-76. Abridged and slightly paraphrased]