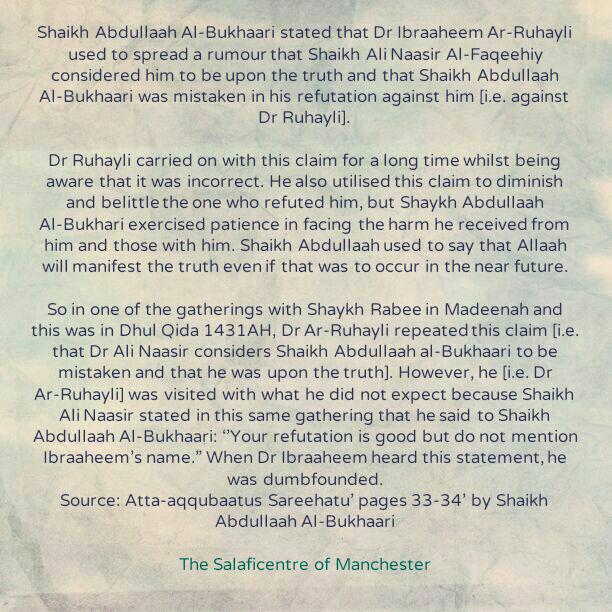 Dr Ruhayli carried on with this claim for a long time whilst being aware that it was incorrect. He also utilised this claim to diminish and belittle the one who refuted him, but Shaykh Abdullaah Al-Bukhari exercised patience in facing the harm he received from him and those with him. Shaikh Abdullaah used to say that Allaah will manifest the truth even if that was to occur in the near future.

So in one of the gatherings with Shaykh Rabee in Madeenah and this was in Dhul Qida 1431AH, Dr Ar-Ruhayli repeated this claim (i.e. that Dr Ali Naasir considers Shaikh Abdullaah al-Bukhaari to be mistaken and that he was upon the truth). However, he (i.e. Dr Ar-Ruhayli) was visited with what he did not expect because Shaikh Ali Naasir stated in this same gathering that he said to Shaikh Abdullaah Al-Bukhaari: ‘’Your refutation is good but do not mention Ibraaheem’s name.” When Dr Ibraaheem heard this statement, he was dumbfounded. [Source: Atta-aqqubaatus Sareehatu’ pages 33-34′ by Shaikh Abdullaah Al-Bukhaari]