People Are Never to Be Judged Merely Due to Smart or Scruffy Appearances, Statuses Or Closeness to Important Personalities In Society, Rather Piety Is The Judge 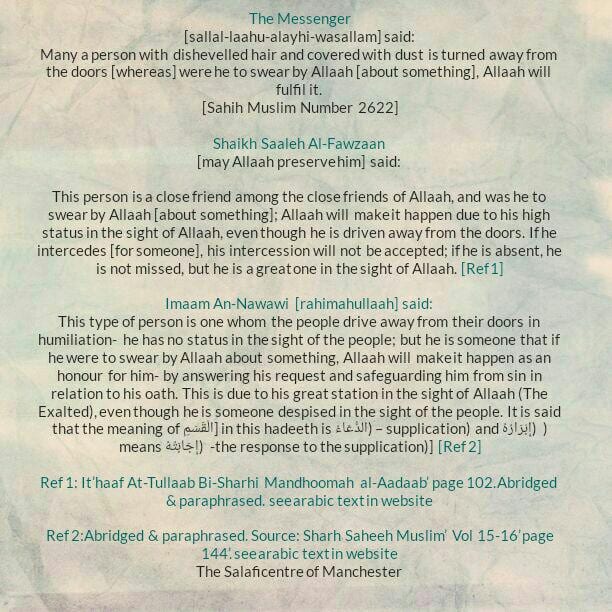 ‘’Many a person with dishevelled hair and covered with dust is turned away from the doors (whereas) were he to swear by Allaah (about something), Allaah will fulfil it’’. [Sahih Muslim Number 2622]

A Short Reminder From This Hadeeth By Shaikh Saaleh Al-Fawzaan [may Allaah preserve him]:

A Short Reminder From This Hadeeth By Imaam An-Nawawi [rahimahullaah]:

This type of person is one whom the people drive away from their doors in humiliation- he has no status in the sight of the people; but he is someone that if he were to swear by Allaah about something, Allaah will make it happen as an honour for him- by answering his request and safeguarding him from sin in relation to his oath. This is due to his great station in the sight of Allaah (The Exalted), even though he is someone despised in the sight of the people. It is said that the meaning of [الْقَسَمِ in this hadeeth is (الدُّعَاءُ – supplication) and (إِبْرَارُهُ   ) means (إِجَابَتُهُ   -the response to the supplication)] [Ref 2]