Summary of Traps of the Shaytān – Ibn al-Qayyim 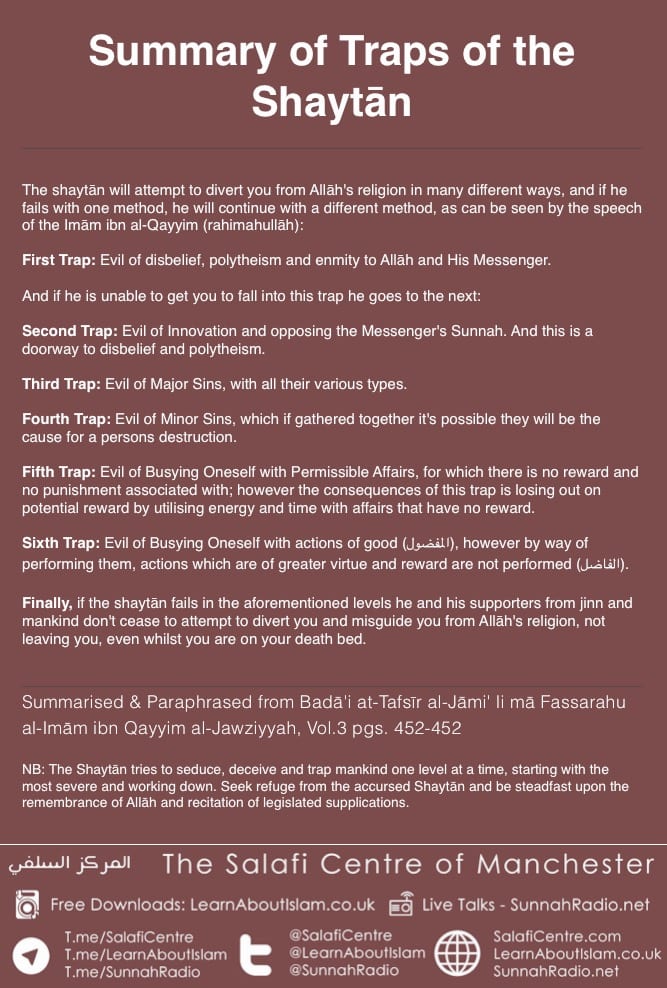 Summary of Traps of the Shaytān

The shaytān will attempt to divert you from Allāh’s religion in many different ways, and if he fails with one method, he will continue with a different method, as can be seen by the speech of the Imām ibn al-Qayyim (rahimahullāh):

Evil of disbelief, polytheism and enmity to Allāh and His Messenger.

And if he is unable to get you to fall into this trap he goes to the next:

Evil of Innovation and opposing the Messenger’s Sunnah. And this is a doorway to disbelief and polytheism.

Evil of Major Sins, with all their various types.

Evil of Minor Sins, which if gathered together it’s possible they will be the cause for a persons destruction.

Evil of Busying Oneself with Permissible Affairs, for which there is no reward and no punishment associated with; however the consequences of this trap is losing out on potential reward by utilising energy and time with affairs that have no reward.

Evil of Busying Oneself with actions of good (المفضول), however by way of performing them, actions which are of greater virtue and reward are not performed (الفاضل).

Finally if the shaytān fails in the aforementioned levels he and his supporters from jinn and mankind don’t cease to attempt to divert you and misguide you from Allāh’s religion, not leaving you, even whilst you are on your death bed.

NB: The Shaytān tries to seduce, deceive and trap mankind one level at a time, starting with the most severe and working down. Seek refuge from the accursed Shaytān and be ardent upon the remembrance of Allāh and recitation of legislated supplications.