[15D] Excerpts From Shaikh Rabee Book Titled ‘Marhaban Yaa Taalibal Ilm’-[The People of Fitan Are Unable to Confront The Salafi Methodology, So They Utilise Different Apparels and Semblances to Deceive The People] 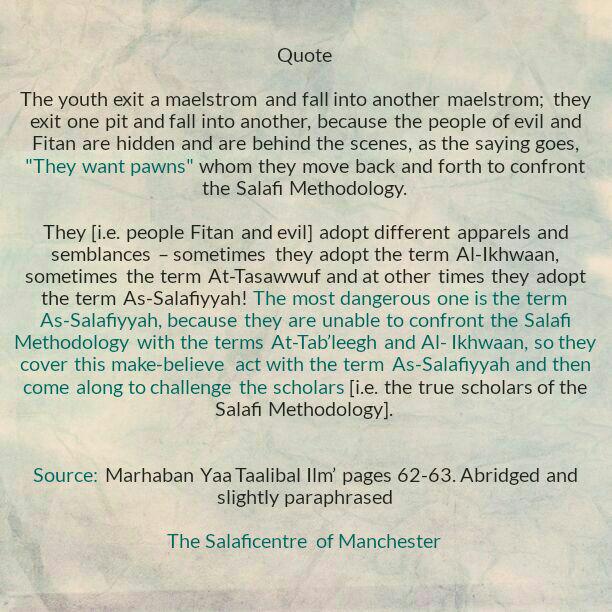 Indeed, I advise the youth to have good manners, to be humble, honour the scholars and avoid this evil orientation [i.e. the claim of the one who says, ‘’I do not make Taqleed of such and such’’, even though the claim behind this is to reject the truth..read here https://salaficentre.com/2017/12/15c-excerpts-shaikh-rabees-book-titled-marhaban-yaa-taalibal-ilm-i-not-make-taqleed-person/], just as the khawaarij used to say: The judgement belongs to none except Allaah”, so Ali [radiyallaahu-anhu]  said to them: “A  statement of truth by way of which falsehood is desired.”

I swear by Allaah -based on my observations  of their actions, statements and stances-that these people desire falsehood and to divert the youth from the scholars. The youth exit a maelstrom and fall into another maelstrom; they exit one pit and fall into another, because the people of evil and Fitan are hidden and are behind the scenes, as the saying goes, ” they want pawns” whom they move back and forth to confront the Salafi Methodology.

Where did Ikhwaan al Muslimoon and the Qutubiyyoon [ref1] get these ideas from in this land [i.e. Saudi Arabia]? Where did the ideas of Juhaymaan, Abdur Rahmaan Abdul Khaaliq, Al- Haddaad, Al-Maghraawi and Abul Hasan Al-Maribi come from? [Ref 2] All of them are tail ends of Ikhwaan Al-Muslimeen’s ideas. All of them- beginning with the Fitna of Juhaymaan up to date- are tail ends of Ikhwaan Al-Muslimeen’s Fitna, whose main setup is to topple the scholars. However, they adopt different apparels and semblances – sometimes they adopt the term Al-Ikhwaan, sometimes the term At-Tasawwuf and at other times they adopt the term As-Salafiyyah! The most dangerous one is the term As-Salafiyyah, because they are unable to confront the Salafi Methodology with the terms At-Tab’leegh and Al- Ikhwaan, so they cover this make-believe act with the term As-Salafiyyah and then come along to challenge the scholars [i.e. the true scholars of the Salafi Methodology].