by Abdullah Jallow | Dec 17, 2017 | Morals and Manners - 'Akhlaaq', Pearls of Wisdom, Purification of The Soul, Scholars of Islam, Worship - 'Ibaadah' 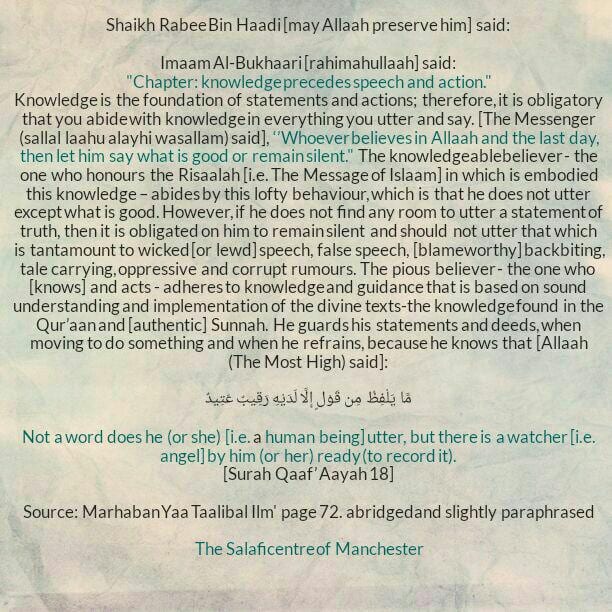 Knowledge is the foundation of statements and actions; therefore, it is obligatory that you abide with knowledge in everything you utter and say. [The Messenger (sallal laahu alayhi wasallam) said], ‘’Whoever believes in Allaah and the last day, then let him say what is good or remain silent.” The knowledgeable believer – the one who honours the Risaalah [i.e. The Message of Islaam] in which is embodied this knowledge – abides by this lofty behaviour, which is that he does not utter except what is good. However, if he does not find any room to utter a statement of truth, then it is obligated on him to remain silent and should not utter that which is tantamount to wicked [or lewd] speech, false speech, [blameworthy] backbiting, tale carrying, oppressive and corrupt rumours. The pious believer – the one who [knows] and acts – adheres to knowledge and guidance that is based on sound understanding and implementation of the divine texts-the knowledge found in the Qur’aan and [authentic] Sunnah. He guards his statements and deeds, when moving to do something and when he refrains, because he knows that [Allaah (The Most High) said]: [ مَّا يَلۡفِظُ مِن قَوۡلٍ إِلَّا لَدَيۡهِ رَقِيبٌ عَتِيدٌ۬ – Not a word does he (or she) [i.e. a human being] utter, but there is a watcher [i.e. angle] by him ready (to record it). [Surah Qaaf’ Aayah 18]