by Abdullah Jallow | Dec 30, 2017 | Morals and Manners - 'Akhlaaq', Pearls of Wisdom, Purification of The Soul, Scholars of Islam, Worship - 'Ibaadah' 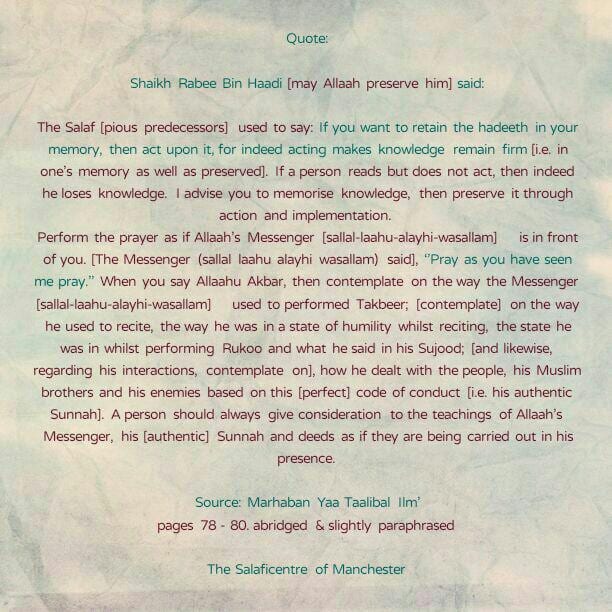 The Salaf [pious predecessors] used to say: If you want to retain the hadeeth in your memory, then act upon it, for indeed acting makes knowledge remain firm [i.e. in one’s memory as well as preserved]. If a person reads but does not act, then indeed he loses knowledge. I advise you to memorise knowledge, then preserve it through action and implementation.

Perform the prayer as if Allaah’s Messenger [sallal-laahu-alayhi-wasallam] is in front of you. [The Messenger (sallal laahu alayhi wasallam) said], ‘’Pray as you have seen me pray.’’ When you say Allaahu Akbar, then contemplate on the way the Messenger [sallal-laahu-alayhi-wasallam] used to performed Takbeer; [contemplate] on the way he used to recite, the way he was in a state of humility whilst reciting, the state he was in whilst performing Rukoo and what he said in his Sujood etc.

[Likewise, regarding his interactions, contemplate on], how he dealt with the people, his Muslim brothers and his enemies based on this [perfect] code of conduct [i.e. his authentic Sunnah]. A person should always give consideration to the teachings of Allaah’s Messenger, his [authentic] Sunnah and deeds as if they are being carried out in his presence. This is the knowledge which Allaah praised and [likewise praised] its possessors.  [Allaah said]:

Therefore, [the affair is not about] knowledge on its own- through memorisation and that’s it; rather a person should learn, act, nurture [himself (or herself) and others], call to this knowledge and what it necessitates in relation to Aqeedah, acts of worship and manners.

The scholars -those about whom Allaah bore witness that they are the ones who truly fear Him- are the ones specifically mention as people of khashyah. [Ref 1]  [Allaah said]: [إِنَّمَا يَخۡشَى ٱللَّهَ مِنۡ عِبَادِهِ ٱلۡعُلَمَـٰٓؤُاْۗ – It is only those who have knowledge among His slaves that will truly have awe of Allaah]. [Surah Faatir’ Aayah 28]

This category of scholars -those who act upon knowledge – are the ones whom Allaah praised and raise their status, and they are the ones who truly fear Him. When Allaah praises them that they possess Eemaan or praises them through any other characteristic, then all that due to beneficial knowledge and the righteous actions [i.e. due the fact that they possess beneficial knowledge and are performers of righteous deeds].

Ref 1: Awe [al-khashyah) is fear founded upon knowledge of the greatness of the One whom he fears, and the complete and perfect Sovereignty and Dominion that is His, since Allaah, the Most High, says, [إِنَّمَا يَخۡشَى ٱللَّهَ مِنۡ عِبَادِهِ ٱلۡعُلَمَـٰٓؤُاْۗ  – Only those who have knowledge will truly have awe of Allaah]. Meaning those who know of His greatness and perfect Sovereignty. It is something more particular than fear, and the difference between it and fear will become clear by giving an example: If you fear someone, but you do not know whether he is able to catch you or not, then this is fear (khawf). But when you fear someone and know that he is fully able to seize hold of you then that is fear/dread (khashyah). [Source: Explanation of the three fundamental principles’ page 51. Translated by Ustaadh Abu Talhah (Daawud Burbank (may Allaah grant him and his wife Jannatul Fir’daws..Aameen)]