Reflection -[Nations of The Past]: What Was The End of Those Ancients Who Boasted About Their Unmatched Strength In The Earth?! 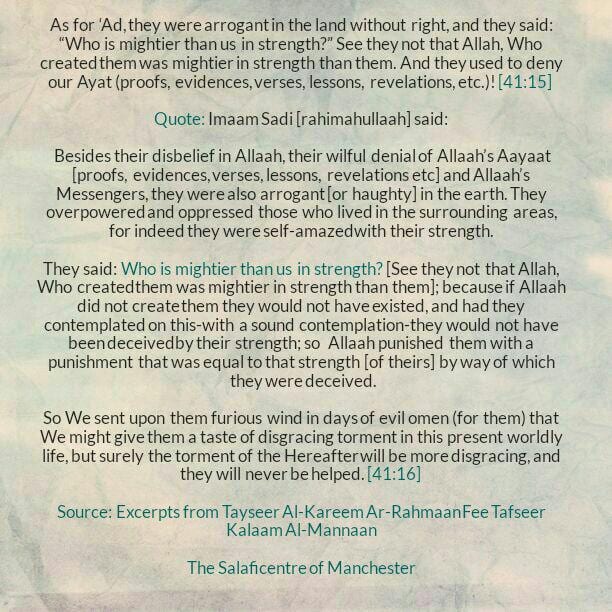 As for ‘Ad, they were arrogant in the land without right, and they said: “Who is mightier than us in strength?” See they not that Allah, Who created them was mightier in strength than them. And they used to deny our Ayat (proofs, evidences, verses, lessons, revelations, etc.)! [41:15]

Besides their disbelief in Allaah, their wilful denial of Allaah’s Aayaat (proofs, evidences, verses, lessons, revelations etc) and Allaah’s Messengers, they were also arrogant (or haughty) in the earth. They overpowered and oppressed those who lived in the surrounding areas, for indeed they were self-amazed with their strength. [Allaah informs us that they said]: [مَنۡ أَشَدُّ مِنَّا قُوَّةً‌ۖ    – Who is mightier than us in strength?].  Allaah stated –in reply to this statement of theirs-:أَوَلَمۡ يَرَوۡاْ أَنَّ ٱللَّهَ ٱلَّذِى خَلَقَهُمۡ هُوَ أَشَدُّ مِنۡہُمۡ قُوَّةً۬‌ۖ-See they not that Allah, Who created them was mightier in strength than them]; that is because if Allaah did not create them they would not have existed, and had they contemplated on this –with a sound contemplation- they would not have been deceived by their strength; so  Allaah punished them with a punishment that was equal to that strength (of theirs) by way of which they were deceived. [Allaah said]:

So We sent upon them furious wind in days of evil omen (for them) that We might give them a taste of disgracing torment in this present worldly life, but surely the torment of the Hereafter will be more disgracing, and they will never be helped. [41:16]