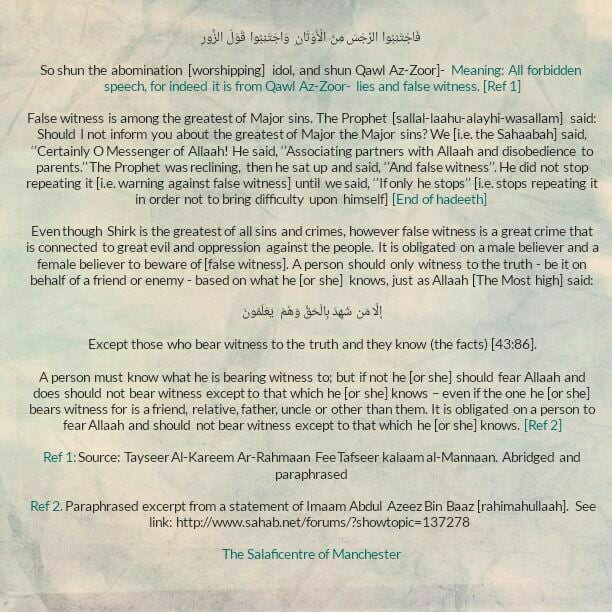 That (Manasik prescribed duties of Hajj is the obligation that mankind owes to Allah), and whoever honours the sacred things of Allah, then that is better for him with his Lord. The cattle are lawful to you, except those (that will be) mentioned to you (as exceptions). So, shun the abomination (worshipping) idol, and shun Qawl Az-Zoor) [Surah Al-Hajj’ Aayah 30]

False witness is among the greatest of Major sins. The Prophet [sallal-laahu-alayhi-wasallam] said: Should I not inform you about the greatest of Major the Major sins? We [i.e. the Sahaabah] said, ‘’Certainly O Messenger of Allaah! He said, ‘’Associating partners with Allaah and disobedience to parents.’’ The Prophet was reclining, then he sat up and said, ‘’And false witness’’. He did not stop repeating it [i.e. warning against false witness] until we said, ‘’If only he stops’’ [i.e. stops repeating it in order not to bring difficulty upon himself] [End of hadeeth]

Even though Shirk is the greatest of all sins and crimes, however false witness is a great crime that is connected to great evil and oppression against the people. It is obligated on a male believer and a female believer to beware of [false witness]. A person should only witness to the truth – be it on behalf of a friend or enemy – based on what he [or she]  knows, just as Allaah [The Most high] said: [إِلَّا مَن شَهِدَ بِالْحَقِّ وَهُمْ يَعْلَمُونَ  –  except those who bear witness to the truth and they know (the facts) [43:86]. 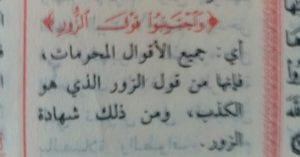